Dragons and dinosaurs – what is the connection? 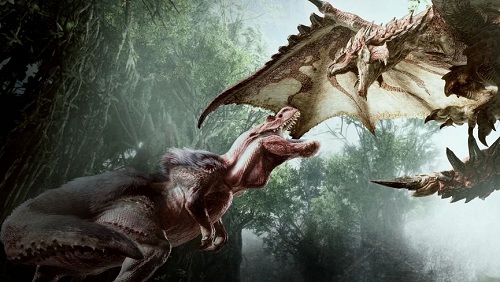 Recently, paleontologists examining Tyrannosaurus bones found remnants of red blood cells – erythrocytes – in the microvessels that permeate them. It is unlikely that red blood cells can survive for tens of millions of years. Such discoveries cast doubt on the multimillion-year age of fossil lizards and even suggest that humans and dinosaurs were still recent neighbors on the planet.

Many readers must have seen the film “Beowulf and Grendel” made by Western European filmmakers a few years ago. In the film, Grendel the troll is shown as a wild man of huge height and frightening appearance. But not all scholars of the Anglo-Saxon epic of Beowulf imagine the troll that way. They pay attention to the fact that, according to the description, Grendel moved silently on two powerful hind limbs, while the front ones were small, frail and hung helplessly in the air. The creature’s skin could not be pierced with a sword or spear. Grendel’s lifespan could exceed 300 years, and by the end of its life, the beast was several times the height of the man it had no trouble swallowing. And the very name of the troll “Grendel” translates as “thresher. He could literally grind up the bones of his victims. Isn’t that a Tyrannosaurus?

Beowulf cut off Grendel’s weak and clumsy front paw in close combat, after which the beast died bleeding to death. No wonder – the tyrannosaur’s blood pressure was very high for a normal supply of oxygen to such a massive head so high above the ground. In general, the seasonal dragon hunt was almost the main occupation of the brave Beowulf. The hero and his team paid a lot of attention to studying the structure, habits and lifestyle of such monsters. The descriptions given in the epic allow us to identify almost all the species of dragons mentioned there with fossil lizards.

Bullshit? Not necessarily. Western European knights and their predecessors always considered it valiant to fight the dragon. Yes, and Russia’s attention terrible serpent Gorynych did not ignore. As Russian heroes – him. Considerable place dragons occupy in Scandinavian eposes. So, for example, the saga “Volsung” glorifies the exploit of a warrior named Sigurd, who defeated the monster Fafnir. The dragon moved on four legs, dragging his heavy body along the ground. Knowing that the hide on Fafnir’s back was invulnerable to a sword or spear, Sigurd dug a hole in the path where the monster walked to the watering hole and, sitting in it, struck the beast above him in the belly.

However, heroes and knights were not always victorious in battle. According to the ancient Celtic chronicles, King Moridd was killed and swallowed by the monster Belua in 336 BC. It “swallowed Moridd’s body as a large fish swallows a small one.” The Early Breton King Peredar was more fortunate to have prevailed in a battle with a similar monster at Llyne Llyon, Wales. British chronicles also tell of many places in present-day Wales once inhabited by monsters – afancs and carrogs – and given their names by these creatures. One of the last afancs was killed in 1693 by Edward Lloyd at Llynar Afanc on the River Conway. And the Canterbury Temple Chronicle notes that on Friday, September 16, 1449, near the village of Little Conrad, which was on the Suffolk and Essex border, many residents witnessed a battle between two giant reptiles.

Another Medieval British chronicle relates that in 1405 “near the town of Bures near Sudbury, to the dismay of all the people, a dragon appeared, huge in body, with a comb on its head, its teeth like the teeth of a saw, and a tail of unimaginable length. It killed the shepherd and devoured many sheep.

Heroes’ battles with dragons also took place in the Middle East. St. George the Victorious once defeated such a predatory reptile. During one of his campaigns he found himself in Beirut. Not far from the city, in the Lebanese mountains, there was a lake in which lived a predatory dragon, which horrified the whole neighborhood. The pagan priests ordered the locals to bring a boy or a girl to the lake every day to be eaten by the beast. Having learned about it, Sacred George has entered into single combat with a dragon and has pierced to a throat a spear, having pinned to the ground. Then it has connected wounded monster and dragged to city where decapitated at a large crowd of people. Today, St. George, defeating the dragon, decorates coats of arms, palaces and temples across Europe and beyond. Researcher-enthusiast Alexander Bogdanov notes that the canonical dragon, as a rule, resembles a carnivorous dinosaur baryonyx.

The Bible mentions the ancient Babylonian fire-red dragon Sirush. This creature, which in Mesopotamia was also called Mushussu and Mushushushush, was considered there the offspring of the mother of all dragons, the divine Tiamat. The images of Sirush were discovered by the British archaeologist Robert Caldeway at the end of the 19th century on the Babylonian gate of Queen Ishtar which he found at the time. These gates were of very ancient origin. King Nebuchadnezzar renewed them and left a text for posterity with the words, “I have decorated the walls with Sirushas so that all men may look upon them and marvel.”

The same Caldeway in 1913 first suggested that the Babylonian dragon resembled fossil lizards. In 1918, he went further and argued in his next book that the animal, if it existed, should be classified as an avian dinosaur. Caldeway wrote: “Iguanodon, found in Cretaceous deposits in Belgium, is the closest relative of the Babylonian dragon.

Images of dinosaurs, and more modern ones as well, have been found in other places. One Cambodian temple, dating from about 1200, has a bas-relief depicting a Stegosaurus, an ancient lizard with pointed plates along its spine. In Britain, on the tombstone of Bishop Richard Bell, who died in 1496 in Carlisle Cathedral, there is an engraving depicting animals that are otherwise difficult to characterize as diplodocs. There they are alongside the usual dog, pig, fish and bird. Needless to say, there are innumerable representations of dragons on Chinese crockery and embroidery, as well as their prevalence in medieval European heraldry.

Generally speaking, the mythical dragon, unlike real dinosaurs, was a fire-breathing creature. It would seem to be a purely fantastic feature. But it’s not that simple. Some paleontologists believe that there was some chemically active liquid – an unsaturated hydrocarbon – in the head reservoir bags of dinosaurs, connected to the nasopharynx by special channels. A sharp contraction of the reservoir bag led to the release of the hydrocarbon. Igniting in the air, the jet served the “dragon” as a weapon of defense and attack.

Not so long ago people documented cases of encounters with fire-breathing gigantic creatures. The great ancient historian Nicostratos of Samothrace wrote in his diary: “The high serpent burnt the ships of the Phoenicians with fire. Today there are still similar fire-breathing creatures, only miniature ones. For example, the bombardier beetle. The insect, not exceeding two centimeters in length, is endowed with an amazing defense mechanism. In special muscle pouches, the bombardier keeps a mixture of hydroquinone and 25% hydrogen peroxide solution, which do not react with each other under normal conditions. In case of danger, the mixture enters the “reactor chamber” located in the back of the bug’s body and containing a special enzyme that acts as a catalyst. An instant explosive oxidation reaction takes place, and a jet of red-hot gas is fired at the offender. So it seems that even the phenomenon of fire-breathing dragons and dinosaurs can be explained rationally.