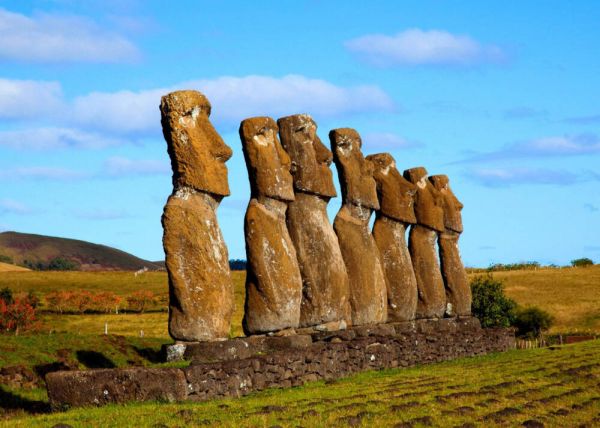 Another study on one of the world’s most remote islands, Rapanui, shows that its inhabitants have not been able to cope with the long-term effects of climate change.

The research is published in The Royal Society Publishing. Thanks to the huge statues called moai, as well as the disappearance of local civilization, Easter Island can be called one of the most mysterious corners of the planet. A lot of discussions, studies and hypotheses are devoted to him. One of them, the so-called ecocide hypothesis, says that the Rapanui aborigines depleted the natural resources of the island, after which they started a war with each other, and they died. Supporters of a different point of view believe that the population of the island was destroyed by the Europeans who came there.

A 2016 study published in the journal Antiquity shows that the tools found on Rapanui are not at all like murder weapons – more like tools for cultivating the land, processing food, or tattooing the body. And there is no evidence of any prolonged wars on the island. Therefore, it is unlikely that the population interrupted each other.

Other scientists in 2017 published a study in the American Journal of Physical Anthropology, in which they argued that the Rapanui population did not die of hunger at all. To find out, experts examined human, plant and animal remains found on the island. So they came to the conclusion that about half of the proteins that the islanders ate came from seafood, that is, they had a fairly rich seafood diet.

In addition, scientists have found that the people of Rapanui also fertilized their crops, thus counteracting the processes of soil erosion. Therefore, according to the researchers, the population could well do without forests, which, as you know, used to grow on the island, and then disappeared.

Another study, published in 2020 in the Journal of Archaeological Science, shows that the social collapse in the life of Rapanui occurred after the arrival of the Europeans and that it is likely they were the ones who caused the decline of the local civilization. Scientists made such a conclusion after they found that the aborigines continued to build their statues to maintain them in good condition after the arrival of the Europeans on the island, and not before. Thus, it turns out that Rapanui society flourished even after their arrival, and was not in decline, as is commonly believed.

However, new research findings again contradict these findings. A group of scientists from Chile, Spain and Norway showed that Europeans still may not be involved in the destruction of the islanders, just as it has nothing to do with deforestation by the Rapanui people themselves. According to the authors of the work, climate change killed the inhabitants of the island. Based on various studies, they indicate that Aboriginal people seem to have experienced three major social crises.

The first – in 1450-1550 (during the Little Ice Age), the second – in 1722-1774 (the reasons for the decline are unknown), and the third – in the 19th century, in connection with the arrival of Europeans (due to epidemic diseases and the slave trade). The researchers concluded that Rapanui’s demographic decline was associated with the long-term effects of climate change, which left Aboriginal people with a severely depleted food reproduction capacity. The analyzes carried out have shown the relationship between the depletion of natural resources and the “leaps” of local demography.