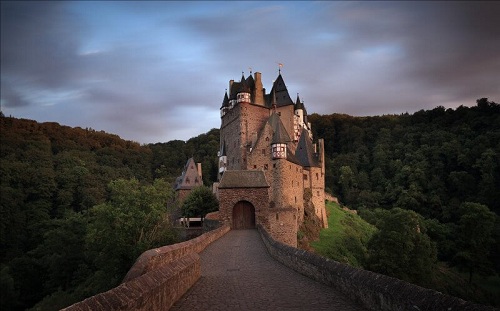 Burg Eltz Castle is located on a large rocky hill surrounded on three sides by the waters of the Elzbach River. For more than 800 years it has been owned by the Elts aristocrats and to this day is a private property.

For a long time of its existence, the fortress has never been robbed or destroyed, therefore its medieval interiors have been perfectly preserved to this day. Moreover, this citadel managed to survive several world wars and the bloody French Revolution, which left its mark on many architectural monuments in Germany, but for some reason did not affect Eltz.

And the point here is not in banal luck or the influence of miraculous forces, but in the fact that the fortress is perfectly protected from an external enemy. Firstly, it is surrounded by a powerful stone wall, and secondly, there are only two ways to get to the territory. One of them runs through the main gate, to which a long and incredibly narrow bridge leads, and the second through additional ones located on the southeast side.

Today the palace is owned by the 33rd generation of the famous German dynasty. However, unlike his predecessors, its current owner, Count Karl von Eltz-Kempenick, chose to leave for the city, opening his house to tourists. Nowadays, sightseeing tours and historical films are regularly held here.