Evidence of cooperation of the Romans with the Huns 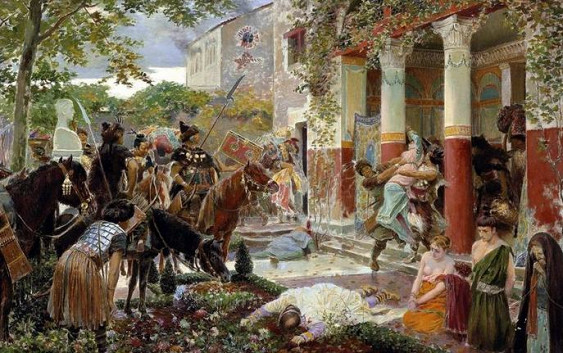 Analysis of various isotopes in bones and teeth lived in the V century BC. Huns and inhabitants of the Roman province of Pannonia (the territory of modern Hungary), indicates the cooperation of the agricultural population of the border province with nomadic Huns.

It is believed that the Huns and other nomads raided settlements along the borders of the Roman Empire along the Danube. Nevertheless, new archaeological evidence indicates that the relationship between the nomadic tribes and the inhabitants of Pannonia, buried in the territory of five Roman monuments in modern Hungary, was more difficult.

Scientists have determined the ratios of carbon and nitrogen isotopes in bone collagen and dentin, which allowed them to determine the amount of people grown on land, sea and freshwater in the diet. The values ​​of nitrogen isotopes made it possible to determine the relative amount of protein consumed by a person (meat or milk). The ratio of isotopes of strontium and oxygen made it possible to understand whether a person grew up where he was buried. The ratio of oxygen isotopes helped to assess the temperature and humidity of the surrounding environment.

The researchers found that the diet varied greatly among both the population and the individual. This suggests that the population was developing strategies for a comfortable existence, and that many people changed their diet during their lifetime. Nomads under the influence of neighbors switched to agriculture, and the inhabitants of Pannonia began to engage in cattle breeding. Farmers and nomads could also exchange products. It is possible that at the end of the Roman Empire the Huns and settlers of the border zones of the Western Roman Empire were not only enmity, but also cooperatively cooperated with each other.