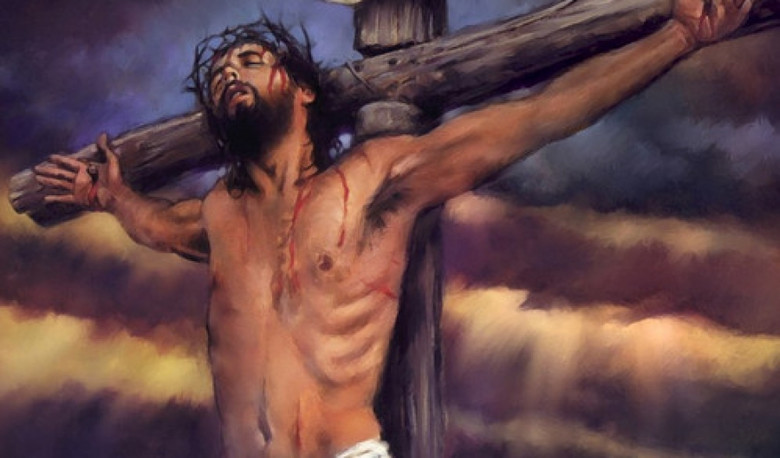 What is stigmata? Stigmata are the skin outgrowths or wounds corresponding to the wounds got by Jesus at a crucifixion.

But here if to continue inquiries and to specify who is the carrier of stigmat from where they undertake that is represented by stigmatization as the phenomenon, for certain we won’t hear sensible answers.

For several tens of centuries which have passed since the stigmatization case has been for the first time described our knowledge of this phenomenon didn’t become deeper.

The fact that in the Middle Ages of a stigmatikama there were generally women is remarkable, and in the modern world their carriers more often are men. The geography of emergence of stigmat has extended — if earlier they appeared only in Italy, then now stigmatik live also in other European countries, and in America, and even in Japan and Korea.

What stigmata happen? Distinguish imitative (or graphic), symbolical stigmata, stigmata on internals. The stigmata reproducing Christ’s body wounds — small forehead wounds from a crown of thorns, four perforating wounds on hands and legs, a wound on the right side, and also traces of castigation and bruise on a shoulder from execution of a cross belong to imitative. Bloody sweat and bloody tears supplement a picture.

Stigmatization — the phenomenon very mysterious. In spite of the fact that the phenomenon of stigmatization is confirmed with numerous documentary sources, it continues to remain disputable. It is still thoroughly unknown whether emergence of stigmat is result of auto-suggestion of the person or this after all divine intervention? Whether miracle it or ravings of a madman?

For hundreds of years it is officially recognized polinny about 400 cases of emergence of stigmat. In this article we will tell about the most famous female-stigmatikakh recognized by Catholic church and who have undergone medical examination. 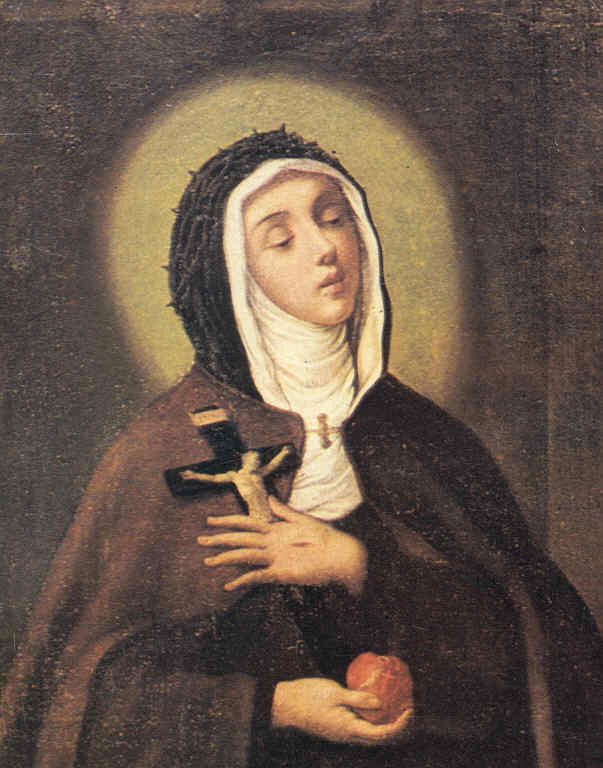 Since the childhood her character was already visible: the girl differed in obstinacy and uncontrollable fits of anger, but at the same time she was unusually pious, priests noted in her signs of mystical grace.

In 1677 she has come to the capuchin monastery, two years later there was already the teacher of novices, an expert of 1716 there — the mother superior. In the monastery she lived in big severity. On the Good Friday in 1697 on her body stigmata have appeared. The church at first hasn’t believed in their authenticity, and Veronika was put on cruel trials.

Especially the father Jesuit Kriveli was zealous. But humility and obedience of the mother Ursula, her desire to assimilate to the crucified Christ, readiness for sufferings and clarity of spirit have forced even the biggest sceptics to believe her.

Usually she is represented as a kaputsinka with stigmata and in a crown of thorns, with a wedding ring on a finger and the wounded baby Jesus.

Veronika claimed that her wounds bleed not only outside, but also inside. She has even drawn what, in her opinion, has been printed on her heart — a cross, a crown of thorns, nailing three, swords and a letter X.

Veronica Giuliani has died in the monastery on July 9, 1727. The opening made by two doctors in the presence of the priest has shown that on her heart really there were hems similar to a cross, and one shovel has been bent as though on it carried something heavy for a long time. 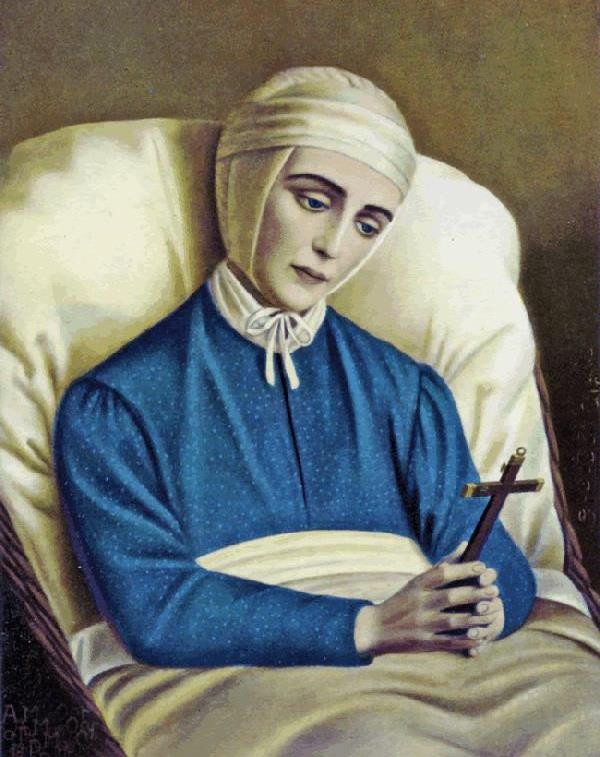 Anna Katerina was born in 1744. Already in the childhood her were Jesus and John the Baptist, in the visions she endured Jesus’s life, and after each such case her breast wound in a form reminding a cross became deeper and more distinct. But that there were not stigmata.

Stigmata appeared at Anna Katerina only in 1799 — around the head the ring was suddenly formed of the small bleeding wounds, and in three years also other wounds — on palms, on the stupnyakh and on one side developed.

Bleeding so weakened the woman that she got sick and since 1813 didn’t get up any more. Her doctor told: “Its stigmata was improbable: wounds in her hands, legs, sides and the head had half-inch a diameter”.

Eyewitnesses claim that within the last 12 years she ate only wafers from a Catholic Mass.

Emmerich daily visited visions. She claimed that she saw the guardian angel, and also God sufferings of Jesus. She saw the smallest details of a crucifixion and felt everything that was felt by Christ.

Her stories about Christ’s sufferings are extremely detailed, it describes a set of details which weren’t in the Gospel, and gave them in own treatment, declaring that Jesus “writhed and trembled as a pathetic worm” that he “shouted a constrained voice and asked about mercy”, and also told that shoulder wound brought to Jesus the greatest sufferings.

However, whether it is possible to trust Anna Catharina’s words, it is unknown as there is also other factor. Her stories were written down by the German poet Klemen Brentano, hotly believing Catholic, and today it is impossible to establish where words Emmerich and where Brentano’s inventions.

With confidence it is possible to tell only one: the book “Mournful Passions of Our Lord and Christ Redeemer Jesus Christ” issued by Brentano nine years later after Anna Katerina Emmerich’s death is constructed obviously not on knowledge of evangelic texts.

Dominica was born in 1815 in Italy. When the girl was 13 years old, her father died. This event so shook it that she absolutely ceased to eat, strongly weakened and soon ached. Several weeks doctors fought for her life and nevertheless forced Dominica to eat food. 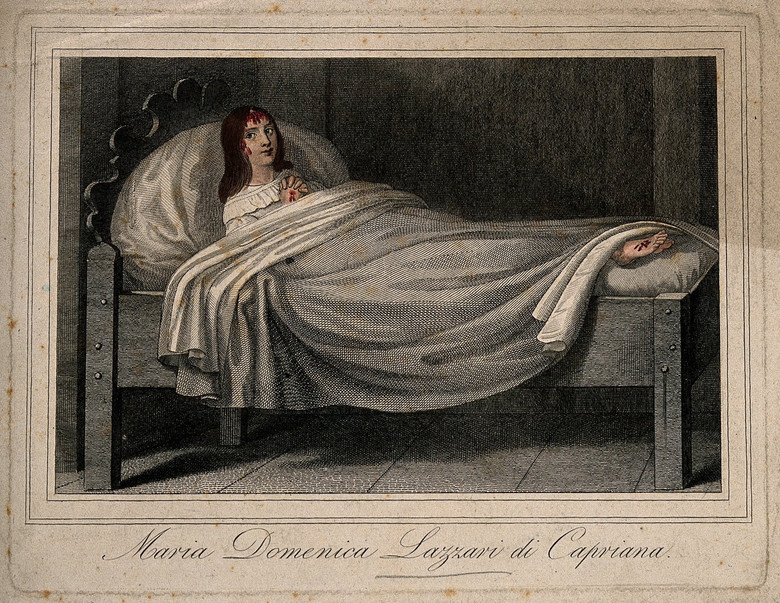 When the girl was 18 years old, she at several o’clock was incidentally locked on a mill in complete darkness. As a result to Dominica there was an attack, and it has spent the life rest to beds semi-paralyzed and with strong indications of a mental disorder — she couldn’t take out noise, light, has refused food. Attempts violently came to an end with vomiting feeding her.

In 1734 she had had wounds corresponding to wounds of the crucified Christ. Stigmata on her hands and legs were through and as her attending physicians told, wounds were so big that through them easily it was possible to push a finger.

Doctor Gregory Kass from the Lisbon Central hospital pointed to one interesting feature of Dominica: in whatever situation she was, blood instead of flowing down down, went towards thumbs and on them as though Lazzari has been crucified on a cross.

The wounds on a forehead of Dominica similar to wounds from a crown of thorns, have developed only once, and there was it in the presence of doctors. Scratches were formed suddenly, from them blood has begun to flow, and after a while they have disappeared.

— from a stigmatama and without food — Dominica Lazzari has lived in such situation 14 more years and has died at the age of 33 years. 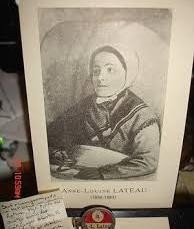 Louise was born in the worker’s family in Sharlrua (Belgium) in 1850. In 13 years the girl got under hoofs of a cow then didn’t get up as her internals were strongly injured.

When to the girl 18 years were performed, vision after which she was roused was her.

This event took place on the Good Friday, and since then bleedings on a hip, then on shins, brushes, shoulders and on a forehead were observed every Friday. This event caused big nervousness in the environment of the Catholic clergy which declared its stigmata wonderful.

Thus, one may say, that Louise got rid of one disease, but in exchange it had stigmata. Having risen, it began to work at a farm, carrying out simple transactions. But forces it quickly died away as with the advent of stigmat she absolutely ceased to eat, any meal caused in it severe vomiting.

The girl got sick again. She was examined by doctors, but they didn’t find an explanation for refusal of an organism to eat food. Since 1871 Louise ate nothing and didn’t drink, but at the same time looked quite healthy.

The Belgian medical academy, having listened to the report of doctor Varlomon observing Louise in 1874-1875 came to a conclusion that the girl is obsessed with the nervous disease known under the name “stigmatizations”

Louise Lato at the age of 33 years died, there was it suddenly so she hardly managed to prichastitsya.

Theresa Neumann was born in 1898 in the small settlement in Konnersreyte (Bavaria). It was senior of children Noymanov. Theresa since the childhood was considered sacred. She didn’t pass any mass and always diligently prayed, being kneeling to a crucifixion or Madonna. 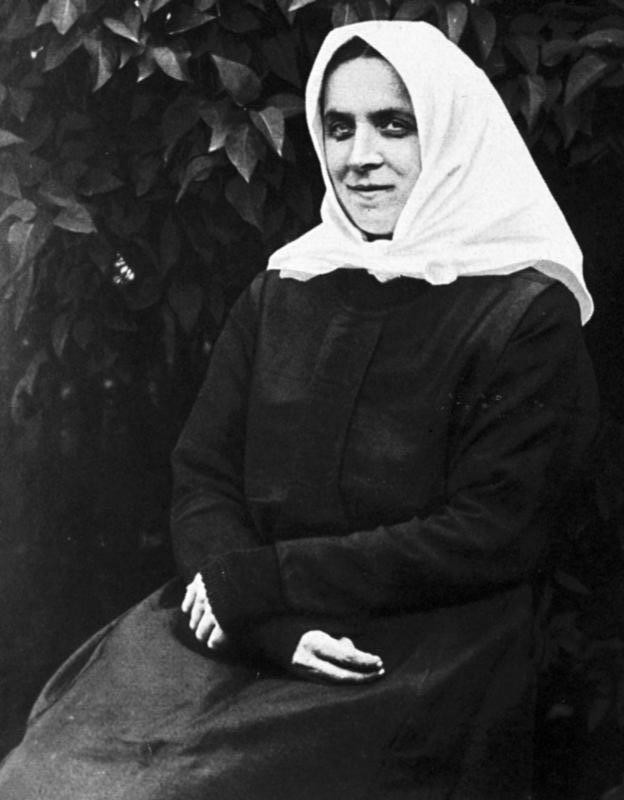 When the girl was 20 years old, in the house the fire began. Theresa tried to extinguish it and as a result strongly suffered.

And all in a month after this event she fell from a ladder, having got the most severe concussion as a result of which it was paralyzed and almost completely went blind. Neighbors decided that this testing of belief for all family.

Seven years later the disease suddenly released Theresa, she got up and began to see clearly, and one year later, on the Good Friday of 1926, Therese was vision in which to it was her sacred then the girl instantly recovered from the illness, however purchased new: on her body there were stigmata — the copy of the wounds of Jesus got by it on a cross.

Since then every Friday to death in 1962 Theresa fell into a trance in which she endured the events which were taking place on Golgotha and it had bloody tears, bloody sweat, the deep bleeding body wounds — on hands, standing and on a forehead. In a week of a wound healed.

Theresa was repeatedly examined by specialists — doctors, journalists, clairvoyants and anybody of them had no doubt that her wounds are real whatever was a source of their origin. That Theresa couldn’t put them to herself, were convinced in the first years.

стигмат on Theresa’s body doctor Alfred Lekhler tried to explain emergence. In 1933 it issued the book in which described the experiments made with the Austrian girl. During the hypnosis sessions it had classical stigmata bloody sweat, bloody tears, cuts on a forehead, the shoulder swelled. However the doctor recognized that artificially caused stigmata both on intensity, and on firmness, and on clearness yield present.

In 1927 vision in which to her it was told that she shall refuse food and water to live was Therese again. It executed an order therefore now it consider (not to confuse the bretariantsa to praetorians and vegetarians, from English breath — “breath”). This movement stands up for refusal of food.

Bretariantsa consider that people were eternal, didn’t begin to eat yet. Food deprived of the person of wings, brought closer to the earth. They categorically against a widespread saying “the Holy Spirit butters no parsnips”, and give as an example just Theresa Neumann.

People couldn’t believe that it is possible to live without food and water therefore the bishop Regensburg in 1960 appointed the commission which shall make sure in truthfulness of such data. Within 10 days four nuns watched Theresa day and night. She ate nothing and didn’t drink, but its weight remained invariable. The medicine couldn’t explain this phenomenon yet.

The head of movement of bretarianets Wylie Brooks considers that it is possible to eat only energy of the sun and chemical elements from air that the refusal of food strengthens production of the hormones of growth which are slowing down aging and stimulates the various extrasensory phenomena, including clairvoyance that can be observed at other famous female-stigmatikov — St. Didvina Shidamskaya, blessed Elizabeth Renskaya, St Catherine of the Siena, blessed Angela from Folinye.