New circumstances of the sinking of the ferry “Estonia”

The team that created a documentary film about the disaster of the ferry “Estonia” for the Discovery TV channel, while diving to the remains of the ship, found a four-meter hole in the hull, which was previously partially hidden by the seabed, writes Postimees.

“It cannot be ruled out that damage played a role in the sinking,” said Jorgen Amdahl, professor of marine technology at the Norwegian University of Engineering and Science, in the new documentary series Estonia – a find that will change everything, which was released today on the streaming platform Discovery. in the Nordic countries. The footage of the hole in the ship’s hull was taken by a robotic diver. The find may confirm the theory that the accident was provoked not only by the tearing off of the visor: there was a hole in the ship’s hull, which accelerated the sinking of the Estonian. The authorities of the countries involved in the investigation of the disaster have previously denied this, Aftonbladet reported.

The place where the wreckage of the “Estonia” lies is clayey, so over the years the ship has shifted, as a result of which places that were not visible before became visible, where the film crew found a hole.

The film crew began their dives at the bow, going first along the backboard, where they discovered two holes that were cut in the hull by the Norwegian diving company Rockwater in December 1994.

When driving with the underwater robot towards the starboard side in the film, you can hear journalist and director Hendrik Evertsson saying that the ship’s roll there is 130 degrees.

The camera moves on and first rests on the sand and rocks that were installed around the wreck in 1996. Then a hole in the ship’s hull is opened in front of the film crew – under the last letter of the inscription “Estline”. The crew estimated the height of the hole at four meters, and the width at 1.2 meters at its widest point.

The damage to the hull of the ferry is located where the cabins were on the other side of the wall. Among other things, the footage of the film shows a hand towel sticking out of the hole.

After discussing the causes of the hole with experts, the film crew came to the conclusion that the explosion could not cause such damage in the ship’s hull. Norwegian Navy Captain Frank Burrsen, who takes part in demining operations and teaches at a naval educational institution and has studied the effects of explosives on ships, told the film crew after reviewing footage of the Estonian wreck that an explosion was unlikely there.

“It is characteristic here that it is very elongated,” he said of the hole captured on the video, and based on the drawings made. – It can be clearly seen that the side of the ship is pushed inward. If you compare with the pictures of explosions, you can see from them that the metal usually bends. ”

According to him, the damage to the ship’s hull creates the impression that this hole was knocked out there: “I cannot rule out an explosion. But it seems unlikely that he was. ”
Experts assumed that it was an external force: a large object that crashed into the hull of the Estonian, punctured it and damaged the metal structural gaskets inside the ship.

The visor could not have caused the hole

According to Professor Amdahl, who is focused on investigating collisions between ships and platforms, external damage appears to be a very logical explanation for the breach.
“It seems that the paint has been peeled off, or perhaps by a body impact of one kind or another. External influence. The question one might ask ourselves is how this could have happened. What was the reason? ” – he reasons.
Amdal believes that there are many versions of how the hole originated in the ship’s hull: “Maybe it got something in the water. It could also be a visor. On the visor itself, I would have guessed marks if it hit the side. ”

But, after reviewing the footage taken around the raised visor, the professor noted that there was no damage to it that would indicate a collision with the ship’s hull.
He said that it was possible to calculate very accurately what the force would have to be to cause such damage to the hull of the ship, and on the basis of this it was possible to guess what mass the object had collided with “Estonia”: “This needs to be studied more carefully.”

According to Amdahl’s calculations, “Estonia” was hit with a force corresponding to a mass of 500-600 tons. For comparison, he gave an example of how such an impact would have been made, for example, by a fishing boat weighing 1000 tons, which was moving at a speed of four knots, or a 5000-ton vessel at a speed of 1.9 knots.

Since no vessels of this size were seen on the night of September 28, 1994, according to the professor, the only possible vessel that Estonia could collide with was a submarine, some of which weigh less than a ton, and some weigh several tons.

“It is also possible that a rock or something from the seabed hit the vessel,” he added, but the clayey seabed in the area where the ferry was destroyed speaks against this.

To find out what Estonia faced, according to Amdal, now it is necessary to thoroughly analyze the testimony of witnesses.

In many documentaries, survivors of the tragedy recall that before the sinking of the “Estonia” they felt as if the ship had collided with something. “A little after midnight, two very strong bangs were heard,” Anders Erisson described what was happening in the fifth part of the documentary.

According to the recollections of Karl Erik Reintamm, it was as if the ferry was making its way through the ice.

He was one of the first passengers to be evacuated from the Estonian: “When I got off the ship, I did not see a single person. There was no one where I stood. I was one of the first. I saw nothing strange in the water, except for something white, several meters long. It went to the left, and the waves covered it. ”

He cannot explain what he saw: “I have never served in the army, I have no idea what submarines look like in the water. It was dark. I have no idea if a submarine might look lighter than water. But the ferry clearly ran into something, otherwise how else can you explain the sound that the ship is driving on ice? ”

It needs to be investigated

“It is not known where this hole came from,” Metsaveer said after reviewing the footage. – It really is something that arose from the outside. And they did not know about this before, this is really a discovery. Why this was not discovered earlier, I cannot say. ”

In the documentary, Luik noted that what he saw requires an investigation of the issue, since it is difficult to say right away what exactly he saw and what to think about it. “The main problem, of course, is that the three countries have agreed that they will not dive and shoot,” he added, assuring that in cooperation with experts it will be decided what steps should be taken in the future. The Swedish media reported only today, citing Estonian newspapers, that the Estonian Prime Minister had discussed the ferry issue with his Swedish counterpart Stefan Löfmen last week.

Lars Engström, a former member of the Swedish parliament and member of the Defense Commission, has long advised the government to investigate the causes of Estonia’s disaster more deeply.
“This is new information that fully confirms the widespread criticism of the flooding explanations and investigation,” he told the TT news agency. “Now the materials show, and experts saw it, that something collided with the side of the ship with a force of several thousand tons, and in this case they are talking about another ship.” 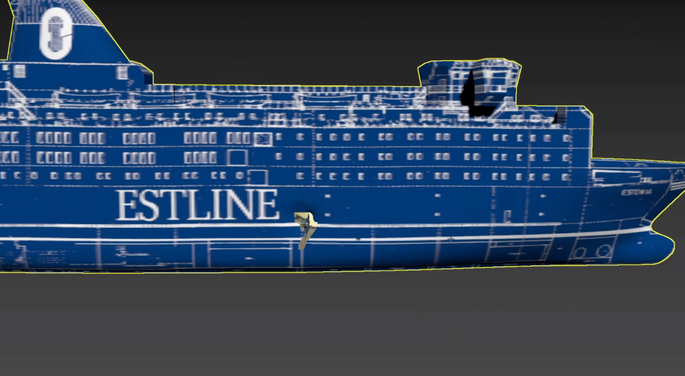 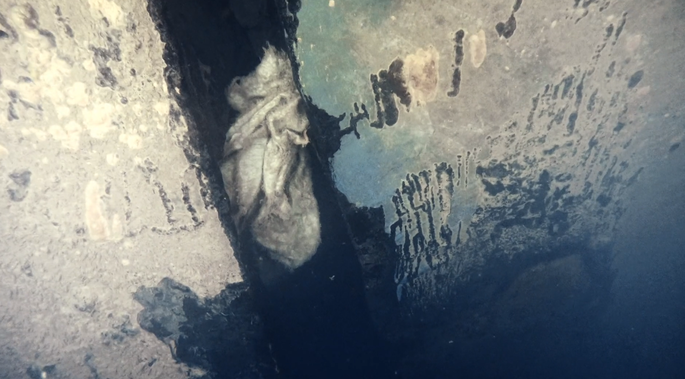 The documentary series “Estonia – a find that will change everything” was produced by Monster Discovery for Norway. Director – Hendrik Evertsson, who is accused of violating the grave because of filming near the remains of the ferry.

The ferry “Estonia” left the port of Tallinn in the evening of September 27, 1994 and headed for Stockholm, where it was supposed to arrive in the morning of the next day. There were 803 passengers and 186 crew members on board.

When the ferry entered the open sea, it was overtaken by waves of many meters, and about half the way to Stockholm, near the island of Utö, which belongs to Finland, “Estonia” gave a list and quickly sank.

Of all those on board, only 137 people were able to escape, 852 people were killed, most of whom were trapped and drowned along with the ferry. Among the dead were 501 Swedish citizens and 285 Estonian citizens. In total, there were citizens of 17 countries on board.
According to a final report by an investigation commission convened by Estonia, Finland and Sweden, the disaster was caused by bad weather, which tore off the vessel’s visor and associated ramp, causing water to fill the car deck.

The authors of the investigation cautiously hint that the governments of Estonia and Sweden may know the truth about the ferry disaster, but for some reason they hid it all these years.