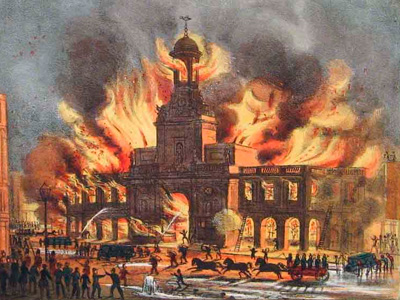 It is believed that history is made by great men, but can affect the History of a simple Baker? The vast majority will say no, can not, and will be wrong. Because one day the fate of the great city influenced Baker. Baker’s name was John Farinaro, and the city of London.

It was in the second half of the XVII century. Farinera modest bakery located in the heart of London, between the Bridge and the tower of London, and culinary products shy guy were pleased with all the Londoners, who in the early morning rush to buy fresh bread in his shop.

Although, to be precise, a modest bakery was not, because within five years John Forinor was in the service of king Charles II and supplied the court of his Majesty for Breakfast fresh rolls and pretzels, for lunch, cupcakes for dinner and pies with various fillings. And John thought, to have such things to bake to please the Royal family and thereby gain credibility.

On that fateful day, September 1, 1666, Farinaro had until late in the evening to stand at the stove and he was tired. He closed his eyes, sleepy. Unable to bear fatigue, Parinor decided to take a NAP, and early in the morning to go back to the bakery, the benefit^ all housed in the same building. First, he sent the apprentices, and then went home myself.

The road was very short, in fact, had to climb the stairs to the second floor. Fainor did not check again the fire in the furnace, because he was quite sure that he left the bakery in order.

He went upstairs to the bedroom, sat down on the bed and soon he felt the day’s fatigue literally crushed him. I had no strength to resist her, though, and thought, not if he still has the flame in the furnace? But he that thought drove, blew out the candle, fell on the pillow, Yes, dressed, and fell asleep.

He slept very soundly, and at the bottom in the furnace continued to blaze not extinguished them flame. And it happened what usually happens in such cases. Sparks from the oven fell onto the dry wood floor, and dry tarred wood instantly broke out.

And then lit the rags and towels. In addition, escaping from a tube of the sparks hit the haystack in a neighboring yard, and he immediately caught fire. From the stack the fire spread to the wall of the adjacent building.

The bakery has pulled the choking smoke, there was already burning wood cracked when apprentices smelled something burning. Guys first of all rushed up to the owner and woke him up. Blazed so that the take emergency measures to extinguish the fire it was too late.

The whole lower floor, where there were barrels of water and had the necessary tools (axes and blades), was on fire. John, his wife, children and apprentices had no choice but to escape through the roof. And on the first floor was only the nanny, already could not come out.

John Farinaro and his family managed to escape by jumping from roof to roof. They got out onto the street and a safe place observed the spread of fire.

In those years London was a crowding of the city with narrow streets where the fires were quite frequent: it was enough to light up one of the old home, instantly, flared and semi-detached. Very often fire houses in areas called the London slums where lived the poor. And these fires no one and did not pay.

But now the fire broke out in the centre of the city, near the tower bridge across the Thames. Nevertheless firefighters was difficult to get to the blazing house. The flames raged, rising wind threw sparks on the neighboring buildings, and soon burned several buildings on the Padding lane. Night street was filled with shouting.

Hundreds of people ran out of their homes to before the arrival of firefighters to somehow try to cope with the fire. But where there! There was, however, some who came just to gawk at the flames and fire victims. Soon, however, most people have realized that the fire quickly spread to other houses and the best thing is to take valuables and run as far as possible.

London is full of buildings of tarred planks and plastered shingles, light up often, so people are already used to such relocations. Of course, fires fought, but a radical means of struggle against fires could not offer one.

However, about a year before the events described king Charles II sent a note to the Lord mayor, demanding to enter stricter fire safety rules.

The Lord mayor, of course, agreed, but no entries were made. The fact that all of the previous fires themselves abated. It was expected that this would behave the same way.

But later it turned out that the Padding lane was a dump that dumped the garbage from the nearby market Itcip-Market, and she would too.

Soon it pulled so poisonous smoke and odor that many citizens could not stand the stench and ran across the bridge to the other side of the Thames.

The Lord mayor on the onset fire notified early in the morning, however, arrived of the mayor the burning house made a weak impression. Fi, ” he said. What’s this fire? Even a woman, if you piss, it is easy to fill it.

No more impression started a fire and made to another government official named Samuel Pepys. The maid woke him up at three in the morning. His house was located near tower hill, about three-quarters of a mile East of the scene of the disaster.

That’s what Pepys wrote in his diary, ‘ got Up, pulled on his Bathrobe, went to the window, thought it should be, not on the back side of mark lane. Well, went back to bed, thinking to sleep. But to sleep he failed. Smoke and the cries of fleeing through the streets people awoke him.

And what about the king? It was Sunday, the Holy day in which no one dared to disturb his Majesty. But it was a huge fire! Shortly before noon, Pepys was in his office in Whitehall – quarter that housed government offices. He could not decide, then plucked up courage and asked him to inform the king that the downtown started a large fire.

However, the king was not able to do anything. He, like all his subjects, could only rely on the mercy of God, and to wait, when the fire goes out by itself. But soon that hope evaporated.

The day was windy, fanning the flames spread to neighboring homes and neighborhoods, and by mid-afternoon the fire had reached the Thames. Almost immediately flared located along the river Bank warehouses full of wood, coal, oil products. Soon they heard the explosions. It exploded the barrels of cognac alcohol and wine.

The fire spread so quickly that there was no way to hold it. The flames overflowed the river that covered the entire street, flew long distances and destroy everything.

The spread contributed to a smooth and dry wind that continuously blew from the East. And thanks to the constant wind fire, just missing the house of Pepys, freely spread to the West. On Sunday, the flames could still probably put out.

But the fire then prevailing in a hurry and bustle, trying to quickly fill buckets, damaged water pipe, thereby leaving the entire Central area without water.

Hellfire raged for more than three days – since the night on Sunday until Wednesday. Three dreadful days and not less terrible nights in London the sky was rose red tongues of flame. During this time, burned 13,200 houses at four hundred main streets, 87 churches and many public buildings were devastated 300 acres of land. Burned stores and shops located on London bridge.

The sparks from it flew to the opposite side of the Thames, and they started fires in other parts of the city. In the ashes turned town Hall and Royal exchange – London’s financial centre.

The most terrible disaster struck fire St. Paul’s Cathedral: from the heat of exploding stones, opened ancient tombs, revealing mummified remains. The roof of the Cathedral was melting, liquid lead streams spread over the surrounding streets. It was a terrible sight. It seemed that some fire-breathing dragon attacked the peaceful city.

However, here’s what is surprising: in the Great London fire (he later became known) were killed only 8 people. Most of the townspeople enough time to escape. The roads were piled with belongings loaded trucks, the whole district turned into a refugee camp.

Who leave the city was and Pepys. In his diary he wrote: In the face blowing in the wind, and at the same time you almost burned the spark of the flame, the rain rolling in with this terrible, this evil, this damned fire… And above all this smoke, so dense and huge that at noon eclipses the sun. And if it sometimes lurks, red as blood.

By Wednesday evening the fire was virtually eliminated. And it happened thanks to the personal intervention of the king, who sent firemen to destroy buildings in the path of the fire to prevent it from spreading. But London smoldered for another few weeks, the basement continued to smolder and half a year later.

When the people of London began to improve and rebuild their homes, a great architect and mathematician Christopher Wren (Wren) (1632-1723) was commissioned to draft a new planning and rebuilding the city.

He suggested the government to consider this disaster and build London a new plan for the city consistent with its purpose – the great capital of a great nation.

However, the proposal of the talented architect was left without proper attention, the project owing to various circumstances, made only in part, and London continued to be developed almost in the same form. Burned down 87 churches of the city to Ren managed to recover in the new Baroque form of 51, including rebuilding St. Paul’s Cathedral.

Also Wren in memory of a natural disaster are tasked to build a monument, which he did. Built by Wren column, known in London called the London monument, other names have never received. 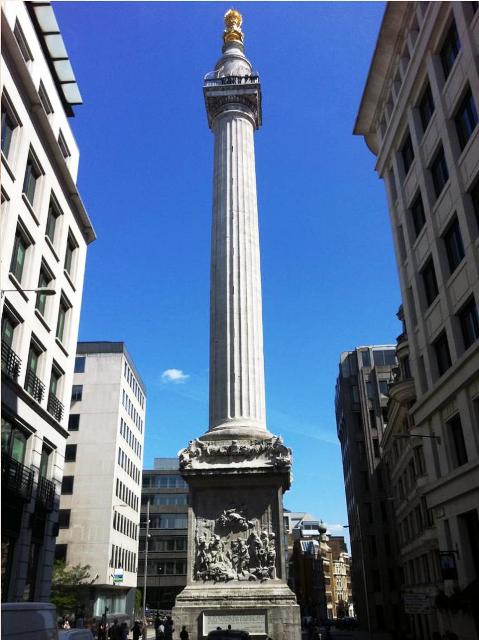 This colossal, Doric order the column has a height of 62 meters. Inside her a ladder made of white marble of 345 steps. They lead to the platform, which offers breathtaking views across London. Column parklandskap built of stone, bronze and marble decor.

On the pedestal it placed a description of the fire with all the details and various allegorical figures. Before the Monument was an inscription that the fire was made by the Papists, now it isn’t there.

In addition, there is a legend that the fire destroyed the consequences previous the London disaster, the great plague of 1665, which claimed one hundred thousand lives, and all forever destroyed in the London plague raged intermittently for centuries.

The great fire of London is reflected in numerous paintings and engravings of the time. Thanks to them we can personally to imagine the horror, remaining in the centuries and included in the list of the great disasters in the history of mankind.