Florida alligator turned out to be a living fossil 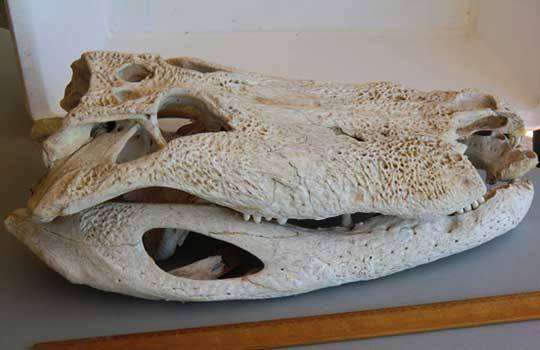 Living in the American Peninsula of Florida gators are a true anachronism and have every reason to claim the honorary status of a living fossil. These are the results of the research of paleontologists of the University of Florida, studying the ancient fauna of the Peninsula.

As researchers found, alligators, so little has changed over the last eight million years, ancient and modern, their representatives may be confidently ascribed to one and the same species. Moreover, paleontologists say – maybe alligators are even older

Most modern predators, as a rule, are representatives of the relatively new groups of animals. On their background looks like a real anachronism Mississippi alligator (Alligator mississippiensis) is still occupying the niche of dominant predator, for example, in the middle of the Florida Peninsula. According to paleontologist Evan Whiting (Whiting Evan), this kind of at least 6 million years older than scientists thought.

If we could go back in time for eight million years, then most likely would have met the same creeping creatures that now reside in the Southeast (USA). Even 30 million years ago, they didn’t look much different, – said Evan whiting, who studied the documentary evidence of the evolution of alligators – or lack of them. We were surprised to find that fossil alligators from such ancient times actually belong to the modern, but not fossil, species.

The study of Whiting began with the finding of the skull of alligator by the age of 7-8 million years. Initially it was attributed to the extinct Alligator mefferdi mind living in Nebraska, 10-12 million years ago. However, the lack of some important features of the structure and quite modern appearance made of Florida paleontologist take a closer look at this pattern. In the result, the scientist came to the conclusion that the skull belongs to a modern form of Alligator mississippiensis, the morphological line, which thus exists in North America with very few changes for at least 7-8 million years.

Whiting compared the ancient skull with dozens of other fossils and modern skeletons, and at the same time studied the isotopic composition of the teeth, comparing it to the accuracy with the same parameters giant crocodile Gavialosuchus americanus, grows up to 8 m in length. Gavialosuchus in those days, too, lived in Florida and became extinct for unknown reasons about 5 million years ago. Basically he was hunting in the sea, but this does not mean that from time to time, alligators do not become food for this monster crocodile, a noted paleontologist.

Our study shows that alligators have not evolved in a vacuum, without other crocodiles living around, – said co-author David Steadman (David Steadman, curator of the Florida Museum of natural history. – Alligators that we see today, really have no real competitors, but millions of years ago they are not just competing with other crocodiles. They competed with much larger crocodiles!

Although in these days of modern crocodiles do look prehistoric animals, they do not have any immunity to evolution, said the authors. On the contrary, they are the result of an incredibly ancient evolutionary lines, with at least 84 million years and have direct ancestors among the inhabitants of the Triassic period, separated from the present day 200 million years.