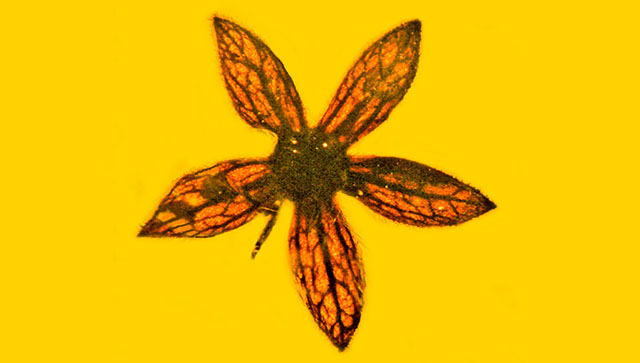 Scientists have found in Burma several pieces of amber, inside which were “immured” one of the first colors of the Earth, trapped in resin droplets of ancient coniferous trees about 100 million years ago, according to an article published in the journal Paleodiversity.

“These pieces of amber preserved these flowers in such a way that they now look as if you tore them from a bush in your garden.The dinosaurs that passed by them could accidentally break branches and” shake “the flowers into drops of resin on the bark of Araucaria , A tree that today is considered to be the main source of prehistoric amber, today their relatives are growing on New Zealand and in Australia, “says George Poinar of the University of Oregon in Corvallis, USA.

Poinar and his colleagues have been trying for several years to find traces of the prehistoric past of the Earth in pieces of amber, formed millions of years ago. For example, in early 2015, they managed to find in a piece of amber hallucinogenic fungus, an ergot that turned out to be the same age as the first dinosaurs and first flowering plants, and at the beginning of last year – a flower that had spent 15 million years in amber, a malaria mosquito, A bacterium of 20 million years old.

Poynaru and his colleagues managed to find even more ancient evidence of the existence of flowers in the distant past of the Earth, performing excavations in the territory of Burma, where about 100 million years ago, in the middle of the Cretaceous period, coniferous and deciduous forests inhabited by dinosaurs, primitive mammals, insects and the first Flowering plants.

In these forests, according to Poinar, trees grew like modern Australian araucarians, making Burma, along with the island of Dominica and the Baltic, today one of the main sources of ancient fossil amber. In these pieces of fossilized resin, scientists have already found several extremely interesting artifacts of the dinosaur era, including the hats of the “fly agaric” of the Mesozoic era and the wing of a dinosaur or bird.

Studying pieces of amber from Burma, Poinar and his colleagues discovered seven pieces of petrified resin at once, in which the full-flowering inflorescences of ancient flowers were preserved, which the scientists at once nicknamed “pyatilistniki”, Tropidogyne pentaptera.

They had extremely miniature dimensions – the diameter of each flower did not exceed five millimeters, and their pistils had a rather unusual “bifurcated” structure, not similar to how other ancient flowers were arranged. These flowers, according to scientists, are close relatives of another ancient plant, Tropidogyne pikei, whose flowers were found by Poinar and his colleagues in Burma about a year ago.

Both these plants are relatives of modern tropical plants from the family of Cunoniidae, which grow mainly in Australia, in southern Africa and in South America. Many of these plants have medicinal properties, and the wood of some members of this family is used for the production of expensive furniture.

How representatives of this family of “southern” plants could be in the north? According to Poinar, in fact they grew in the southern hemisphere of the Earth, just Burma “moved” to the north, moving along with the rest of Hindustan after the split of Gondwana, the southern supercontinent, which happened just about 100 million years ago.