Fossil find: a beetle in the lizard, a lizard in a snake 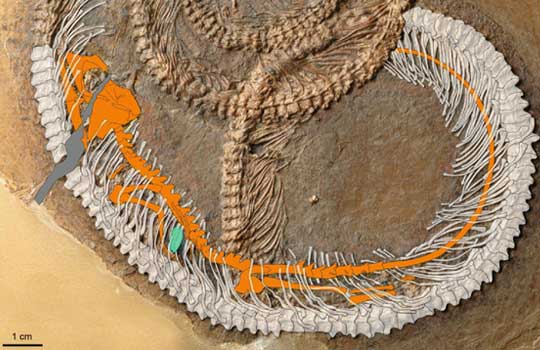 A unique find, which is a nearly complete food chain Paleogene period, did paleontologists in an abandoned German career. They have unearthed fossilized remains of a snake, inside which is preserved the skeleton swallowed by the serpent lizards, the Basilisk in the abdomen which, in turn, were the remains of previously eaten insect.

This is an extremely rare find. Still something like it was known only from Austria, where fossil shark contained the remains of amphibians, had lunch before the death of small fish.

This fossil, which I probably won’t be able to find never in my life, so it is rare, – said the study’s lead author Krister Smith, a paleontologist at the German Senckenberg Institute. – It was an amazement in its purest form.
As suggested by Smith, 48 million years ago, somewhere in the vicinity of the volcanic lake early Basilisk Geiseltaliellus maarius ate a shiny beetle. A few days later the lizard she got for lunch Palaeopython fischeri young snake that lived in the trees near the shore of the lake. What happened next is not entirely clear whether the release of toxic volcanic gases, or something else, but the snake fell into the lake and remained forever at the bottom of it.

This fossil is amazing, we were just lucky that we can learn, ” added another researcher, Agustin Scanferla of the Argentine Institute of biology and Geology (IBIGEO).

Find Eocene food chain enclosed inside the snake, is really a unique event. Something like paleontologists met only once in 2008 in the Permian sediments of Austria by age 250 million years have been found fossilized shark that ate some kind of amphibian, which in turn ate little fish. But that discovery was much more fragmented, and was not allowed to say much about the trophic chains of the past.

It should be noted that the Messel Pit, as they call the place of discovery of nesting dolls, known for well-preserved animal fossils of Eocene age. Hence, for example, occur the remains of one of the most ancient Primate Darwinius masillae, two turtles Allaeochelys crassesculpta hardened during coitus and other notable specimens. Smith and his team plan to continue excavation in this location in hopes of an amazing new discovery.