“Frankenstein’s dinosaur” was the “lost link” of evolution 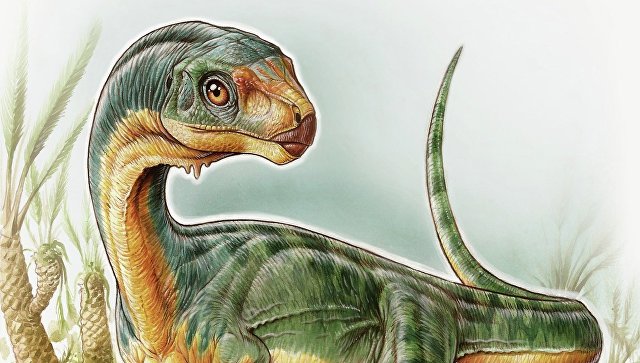 Whimsical herbivore dinozavr- “Frankenstein” from Chile, while similar to the tyrannosaurs and velociraptors, was the “missing link of evolution” linking carnivorous dinosaurs and two-legged victims, say scientists in a paper published in the journal Biology Letters.

“Chilezavr is one of the most unusual and interesting dinosaur ever discovered in the history of science. Truly an” Frankenstein “it features set allows it to occupy a key position on the tree of dinosaur evolution, and helps us understand how to split the path of the largest groups of dinosaurs” – says Paul Barett (Paul Barett), paleontologist from the National Museum of Natural History in London (UK).

Two years ago, British and Chilean paleontologists conducted excavations in the south of Chile, where the rocks formed at the end of the Jurassic period, about 145-140 million years ago. As the scientists told then, they originally studied the history of the formation of the Andean mountains and did not try to look for new species of ancient lizards.

During this expedition the child of one of the geologists accidentally stumbled upon the remains of an extremely bizarre dinosaur, which the scientists and the press themselves quickly dubbed the “Frankenstein dinosaur.” This three-meter creature, named “Chilesaurus,” was similar in its anatomy to the so-called tetanuras (Tetanurae), a group of predominantly predatory dinosaurs that included tyrannosaurs and ancestors of birds.

Despite this relationship, the Chilean “Dinosaur Frankenstein” though he was in something like on tyrannosaurs, and velociraptors, the most famous predatory “dinosaurs terror”, but it was a herbivore or an omnivore with teeth and jaws are not adapted For hunting other giants of the Mesozoic.

The unusual diet and appearance of these ancient and allegedly primitive dinosaurs, whose body is expressed in Mettyu Baron (Matthew Baron), a colleague Baretta like “sewn” from pieces of many other species of ancient reptiles, led many paleontologists doubt that they are indeed Tetanuram.

British scientists tested whether this is in fact making a list of 450 distinct anatomical characters “Dinosaur Frankenstein” and comparing them with similar parts of the anatomy of other herbivorous and carnivorous dinosaurs that lived at the same time or later.

This analysis led to unexpected results – it turned out that the Chilizaurs were not only relatives of the tetanurists, but also the ancestors of all the so-called bird-dinosaurs – relatively “advanced” herbivorous lizards who walked on two or four legs. These dinosaurs were relatively modest in size compared to giant sauropods, but they were able to run fast, and also had a beak and a large intestine that helped them eat almost any vegetable food.

Common evolutionary roots predators of the second half of the Mesozoic and their victims, as scientists say, can explain many similarities in their anatomy, including the presence of feathers, and the existence of unusual species of herbivorous creatures such as terezinozavry and beypyaozavry more similar in their anatomy on tyrannosaurs and Other tetanuras, than on traditional ptitsatzazovyh pangolins.

Such conclusions, as paleontologists themselves expect, will not be positively received by all scientists, since it was previously believed that predatory dinosaurs and their victims are not even distant relatives. As Baron and Barrett hope, the discovery of new “lost links” of evolution, similar to the Chilean “Frankenstein dinosaur”, will help convince skeptics that such a connection exists.