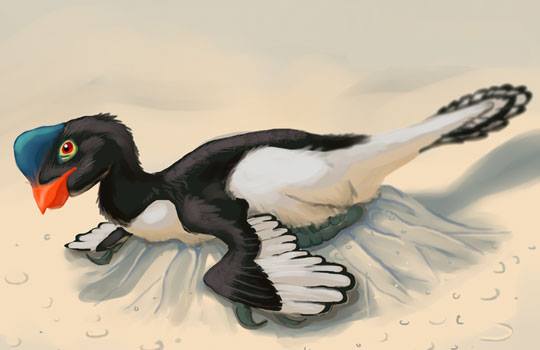 American paleontologists have enriched the collection of original biological tissue preserved for millions of years. In fossils of one of the Mongolian dinosaur they have discovered the real keratin is a protein that forms claws of modern birds and even our own nails.

How an organic substance could withstand the destruction or replacement by minerals? According to scientists, in this particular case, the leading role was played by a good burial – dinosaur brought a sandstorm and all subsequent millionaire he spent in fairly decent conditions

The skeleton of a small oviraptorid Citipati osmolskae, reaching three meters in length and lived about 75 million years ago, found in Mongolia in 1995. Then scientists especially impressed that the lizard was killed, and not left laying its own eggs in the midst of a sandstorm. But now, a detailed study of fossil remains, Alison Moyer (Alison Moyer) from Drechselschule University found on the bones of the limbs, a strange structure that seemed to her the remnants of the claw.

According to the researcher, thin lenticular education, stretching beyond the bones of extremities, was located approximately in that place where were supposed to be claws. In addition, both in color and texture as it differed from the actual bones of the skeleton and the host rock.

What if it’s a genuine claw Mesozoic animal, decided Alison, and sent him on immunohistochemical analysis (IGH).

It is worth mentioning that the claws, nails, hair and the like of the structure of vertebrates consist of a special protein – keratin. In modern birds the claws can come across two modifications: soft alpha-keratin, which is on the inner side of the claw and durable beta-keratin that forms the hard surface of the claw. To establish the presence of keratin in a sample can be due to the antibodies entering with it in reaction.

Armed with antibodies to keratin of modern birds, a paleontologist began the tests. Alas, the results of the first IGH test was completely inconclusive. Not wanting to abandon a promising hypothesis, Moyer looked more closely to the sample, and found that the chemical tests detect in it an unusually high concentration of calcium. Of this element there was a lot more than in the claws of modern birds. Perhaps the calcium interferes with obtaining a valid result, thought Moyer and removed it from the sample.

During the re-testing of the antibodies reacted to the keratin are much more active than last time. Even managed to clarify that in the sample preserved molecules of beta-keratin.

Since this study used well-tested methods, it not only supports the hypothesis of a longevity protein in the geological record, but also suggests how they can be preserved, noted Moyer. – It is likely that the inclusion of calcium in the tissue helped to preserve it, but the calcium had to be removed so we can see its basic molecular composition.

She also added that great importance must have had and the fact that the body of the lizard was almost instantly buried under a thick layer of sediment, which prevented its destruction by scavengers and erosion processes.