From the bottom of the Barents sea raised the tank “Sherman” 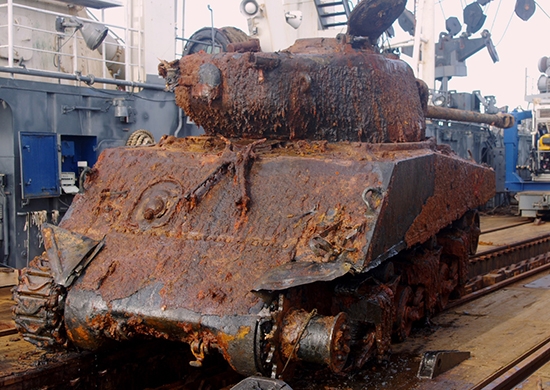 Divers of the Northern fleet is lifted from the bottom of the Barents sea American medium tank “Sherman” during the great Patriotic war. The work was carried out in the area of the sinking of the transport “Thomas Donaldson”, torpedoed by a German submarine in March 1945. The ship was part of one of the last of the Arctic convoys sent by the allies in the Soviet Union with a cargo of military equipment.

Raised the tank has already become the second fighting machine, brought to the surface with the dead transport. Work on the survey of the vessel and lifting of equipment the divers are SF in 2010. In the first year from the bottom of the raised engineering machine (road roller) and transferred to the exposure icebreaker-Museum “Krasin”.

Informed from the holds of transport drew on the surface of the tank “Sherman”, 90-mm antiaircraft gun M2 and two road roller. All this equipment was supplied to the USSR under lend-lease from 1941 through 1945.

This time, in addition to the tank, up the surface of the 102-mm gun, antiaircraft machine gun and steam locomotive, as well as several artillery shells and missiles.

Victim transport is near the Western tip of the island Kil’din near the entrance to Kola Bay. He sank at a depth of 55 m, which allows divers to practice the skills of work under water in a lightweight diving equipment and apply compressed air at great depths have been used for special gas mixtures).