Gait of people over millions of years have not changed 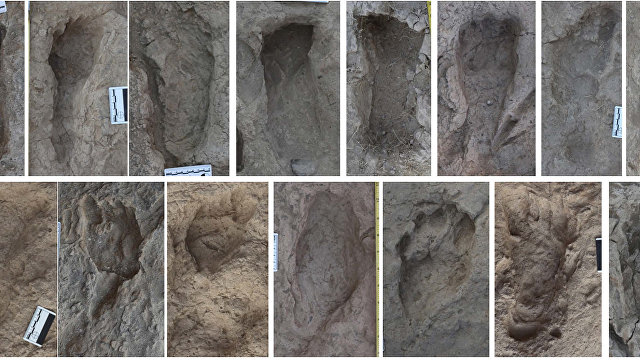 The first representatives of the genus Homo, erectus people had the same gait and manner of walking, like their descendants today, in 1.5-2 million years of evolution, as indicated by their fossilized footprints from Kenya.

“These tracks are so far the only direct evidence of popular beliefs about ancient people really are true. At least one of our ancient relatives, lived on Earth 1.5 million years ago, went through it in the same way as we do today,” said Kevin Hatala (Kevin Hatala) from the George Washington University (USA).

The first undisputed human ancestors, upright-walking humans (Homo erectus) appeared in the East and southern Africa about 1.8-2 million years ago. They are the direct ancestors of modern humans, the Neanderthals and the “hobbits” from the island of Flores, Homo erectus are considered the inventors of the first complex of instruments of labour, the discoverers of fire and the first chefs to learn the secrets of cooking food.

Their characteristic feature was considered to be their ability to bipedalism, but to date scientists have not been direct evidence that these ancient hominids really went the same way as modern people and not combined in himself the manner of motion of the Australopithecus and the genus Homo.

This gap in the fossil record have been filled in by a group Hatala discovered in the North of Kenya, in a place called Ileret, deposits of sedimentary rock that was formed 1.5 million years ago, in which the imprinted footprints of several adult Homo erectus.

According to scientists, they managed to find five sections of the rocks, where he printed hundreds of traces at least 20 different proto-humans, which allowed them not only to “read” how went Homo erectus, but also to reveal some details of their social lives and define their size and mass.

For example, the depth and shape of the footprints tell scientists about the fact that the groups of erectus people were quite cosmopolitan and tolerant societies – at the same time there were a lot of adult males and females. This means that males and females they are tolerated or even welcomed the presence of other individuals of the same sex – in other words, Patriarchal or matriarchal harems in them was absent. The presence of a large number of males in this group, as scientists believe, evidence that the footprints were left by a group of hunters.

While Homo erectus almost inferior to modern humans in size, their average weight was 49 pounds, which fits into the typical weight for a modern Kenyans of ethnic Dassanech. Apparently, people began to acquire familiar to us, to form themselves into companies and walk as much as we already 1.5 million years ago, the scientists conclude.