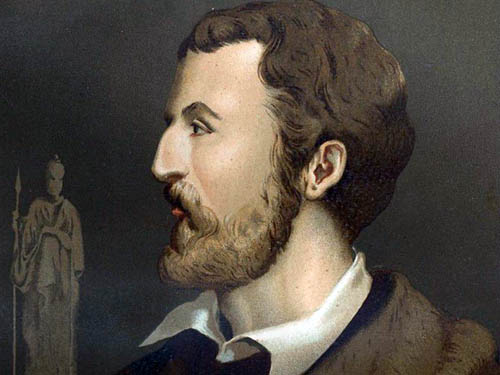 Who among today’s students, and even more motorists, or car manufacturers, do not know what the driveshaft? However, this phrase familiar to all, even far from the automotive industry, because the appearance of the gimbal mechanism has revolutionized the technique.

To read it, but few know about the fate of its inventor, Girolamo Cardano (1501-1576). At the time, he was not only a great engineer, mathematician, mechanic, physicist and physician, but also the largest occultist. To understand this, it is enough to mention just one fact: all the important decisions he took based on the interpretation of his own dreams.

Girolamo Cardano was an absolutely fantastic person, encyclopedic educated. It is on a par with such figures as Saint-Germain, Cagliostro, Swedenborg. From birth to the grave cardan was acquainted with the other world, was known as a powerful wizard, a healer and a connoisseur of arcane Sciences.

In fact, his was truly immense, not only in the occult-magic field. Those, for example, those involved in the intelligence services, and no matter what country, honor him for his outstanding development of encryption system, which was named in his honor as the “Cardano grille”.

This remarkable man invented the famous method of opening the secret mail, that is censorship: the final recipient and not think of that before he addressed to him the message was already someone read. Technique this opening is very unusual.

A thin rod is inserted into the envelope through the slot in the gluing and writing neatly wound on it, then removed through the same slot and read.

After reading the message of his return to the place the same way. Many people know this method: by using it, many scammers since Soviet times the money was taken out of the Bank packages. Of course, the method requires a certain dexterity and experience, but any experience can be purchased.

Girolamo Cardano was the illegitimate son of a Milanese lawyer Fazio Cardano. Fazio was well versed not only in law but also in medicine and mathematics.

He even advised on problems of geometry of his friend, the great Leonardo da Vinci. How to write contemporaries, the father and the son Cardano had personal spirits (or demons) who have helped them in life. They warned them of danger. This files most often during sleep.

Cardano claimed that he was guided by dreams in the most important occasions of her life: in marriage and in his medical practice. As a man he was absolutely untenable right up to thirty years.

In his dream he was informed that he will gain virility, and were even called his future wife, which he till that time never seen.

The dreams prompted Cardano and treatments that are best suited for this disease and the patient. And people thought he heals with magic or evil forces.

In addition to the ability to interpret dreams, Cardano had three great abilities that helped him to solve life and academic problems.

He fell into a trance at any moment when wanted. He could see what he needed, with the help of imagination. He was able to learn about upcoming events, examining his nails.

In 1524 father Girolamo Cardano died, leaving him a house and a small inheritance. The young heir decided that dice, chess and cards will help him to quickly increase the condition.

Man he was hot, he always carried a knife and when he felt that the enemy was cheating, without hesitation, allowed him to move. His impetuous temper brought him a lot of trouble.

In addition, his life was overshadowed by another issue: Cardano is not accepted in the medical Corporation not only because of its unbearable nature, but also due to the fact that he was illegitimate. However, you do not have permission to practice medicine, Cardano was treated and very successfully.

So, for ten years, John Hamilton, Archbishop of Scotland – suffered from asthma. The best the doctors could do nothing to help him and considered the position of the Archbishop is completely hopeless. Meanwhile, flour a patient with each passing day became more unbearable.

Then his surroundings and remembered about the Italian doctor Cardano, who was said to have been subject to any illness. Cardano, never refused from the opportunity to earn a lot of money, immediately set off.

In 1552, he arrived in Edinburgh and immediately visited the Archbishop. And two weeks later Cardano already left the city, having received 2 thousand gold crowns and a lot of expensive gifts.

By this time the illness of his senior patient vanished. This fact is noted in numerous documents. But asthma is not a disease that can be cured in one day, it knows every physician.

Rumors of miraculous healings were forced to turn to Cardano wealthy people, and soon he acquired many influential patrons, among them cardinals, senators, patricians. In 1537 Cardano became the personal physician of Senator Sfondati.

Among his patients was also a Senator’s son – a quiet and painful Niccolo, the future Pope Gregory XIV. Thank Cardano grew rapidly, it became known as the best doctor in the world. He received invitations to act in continuous service from the German Emperor, French king, Queen of Scots and the Pope.

Cardano offered the best terms, but he rejected all offers, appreciating above all their independence. The time, the scientist-mystic spent on teaching, medical practice, research and gambling.

He has published more than two hundred works on medicine, mathematics, physics, philosophy, and problems of religion, morality and music, chess, playing cards, and also in the occult Sciences, astrology and the interpretation of dreams.

He wrote about everything: about the miraculous healings, water, air, poisons, plague, urine, teeth of wisdom. Many of his books have become bestsellers.

In 1543 Cardano published highly appreciated by his contemporaries, the treatise on astrology. Incidentally, among his astrological predictions, was the prophecy of the great changes that will occur in the Christian world, around 1800, Many historians and occultists believe that it was about the coming of the French revolution. Most likely, they are right because anything bigger and more significant than the French revolution in those years on the planet did not happen.

Actually, in astrology, Cardano wrote many books. Still has not lost relevance such his works as “On the restoration of heavenly times and movements, also 47 horoscopes, remarkable because of the events they predict (the first major astrological work of Cardano),””, “About annual, monthly and daily hits”, “Examples hundred genitor”, “the Book of the twelve genitor, comments in 4 books to the “Tetrabiblos” Ptolemy, “Astronomical aphorisms in seven parts,” etc.

Cardano was the horoscopes the most famous of his contemporaries – Petrarch, dürer, Vesalius, Luther. According to reviews, they were surprisingly accurate.

Believing in astrology, he nevertheless in the essay Geniturarum exempla (1554) gives examples of the twelve horoscopes failed to show how easily an astrologer to fall into error.

Using astrology and magic in his medical practice, Cardano had developed a metal-therapy and astrological system octotoma (vosmichastny scheme for the construction of houses of the horoscope). Was also the founder of metoposcopy system of divination by the lines of the forehead.

Cardano wrote a lot about the different types of magic. Some believed that genius, based on the use of hidden forces of things, other on the influence of the stars, some on the separation of the soul from the body, on the relationship between man and nature, etc.

Cardano created the original cosmology, according to which the primal consists of three elements – Water, Air and Earth and Fire – only form of existence of all-pervading heavenly heat.

Of great interest is also held Cardano’s astrological analysis of religions. After Pomponazzi he explained the origin, rise and decline of religions, the influence of the heavenly bodies.

In addition, Cardano specifically dealt with the problem of the influence of the stars on the gems. Stones, as taught by the great Italian, have special forces, which do not have the soft tissue of the plant or animal. So, hyacinth, carry a man affected by the evil eye, fades and loses Shine.

There is no such gemstone that not would have great advantages. Some help to extend the life of others to gain wealth, physical strength, health, love, luck.

However, the stones can make people lazy, timid, sad. It is important at what position of the stars made jewelry with stones, as the stone takes over the power of the heavenly bodies. Curiously, all what has been said of cardan, in relation to gemstones, is confirmed not only by contemporary spirituality, and academics.

The Cardano was a great emerald, which protected him, revealed to him many secrets, but at the same time taught him how to help himself and his sons. The fact that the firstborn Cardano was executed, and the youngest son – Aldo, like his father and grandfather, became a passionate player. So passionate that one day lost everything they had, including clothing.

To pay, he stole his father’s money and jewels. Many times Aldo was in prison, but Cardano was always rescued by his successor. He knew that the other had not. Cardano was, so to speak, a classic illustration of the expression: “Shoemaker without shoes”.

Own troubles Cardano connected with the fact that too often used the help of spirits. They never provide this help unselfishly, while the fee for their services are always immeasurably more than help. (Here would remember modern experts on magic and the occult!) However, the gift to make contact with the spirits is given to few people, so to refuse the help of the lords of the underworld almost no one is capable of.

In 1570, Cardano, despite his connections in the Vatican, was arrested on charges of heresy. The reason prison was his insatiable scientific curiosity. Heresy Cardano was that he made the horoscope is not anyone but Jesus Christ himself (and then of Muhammad), and argued that all the events of their lives were determined by the influence of the stars.

Cardano was imprisoned for only a few months, but in the end suffered: he was forbidden to hold a post at the University and publish their work.

Then Cardano went to Rome, where the throne of St. Peter sat his old patient Niccolo Sfondati, now – Pope Gregory XIV. The Pope pardoned the scientist, she knew that he does it sincerely, following his passion. Dad said cardan to resume the practice of medicine and even gave him a small pension.

Died Girolamo Cardano September 21, 1576, three days before his 75th birthday, as he predicted, made his own horoscope.

In honor of Cardano named a lunar crater Cardanus.