Heritage of Atlantis in the jungle of Cambodia

Last summer published the results of research by the Australian archaeologist Damian Evans. Using air laser scanning technology he found in the jungles of Cambodia a few completely covered with thickets of cities. Hoping to uncover the mystery of the Indochina Peninsula went Viktor Melnikov, the Russian traveler and scientist.

– The opening of Evans wrote the authoritative scientific edition of the Journal of Archaeological Science (Journal of archaeological science”). Age found in Cambodian jungle towns of not less than 1400 years. This confirms the hypothesis that on the plateau of the kulen in the Northern part of this country are numerous, hidden from the eyes of the ancient buildings. Detailed maps made it possible to consider many geometrically smooth regions, which presumably had once been gardens. Found traces of a complex water supply systems. They were built many centuries before this technology, according to scientists, all appeared…

On the way to Cambodia I stayed in Laos. In this country of Indochina is also a lot of amazing. There lives a padaung tribe, whose women have long necks. Starting around 5 years old girls put on the neck of the copper ring, or rather a spiral with a thickness of about 1 cm. every year the number of rings increases, the neck is extended. This continues until the girl marries. The adult female giraffe (they call them tourists), the number of rings can reach two dozen, and their weight is 4-5 kg. the Rings can be removed and put on again, harm is not caused. There is a myth that female giraffes live without them can not, that their neck is broken. But it’s not. Woman who withdrew rings do not suffer from their absence. But if completely abandon this attribute, in a year or two the neck will take the usual form. The researchers examined the representatives of the tribe with the help of x-rays. It turned out that they did not neck is extended and under the weight of the rings gradually lowered the shoulder area.

Even in Laos there are amazing plain of Jars, where the hilltops are hundreds of huge jars of unknown origin, resembling a stone stupa Baba-Yaga. Their height from 1 to 3.5 m, a diameter of about 1 m. The largest one weighs 6 tons the Jugs are made from rocks that are in the area do not occur. The purpose of these artifacts, little is known. Some believe that they kept the rice or wine. Other – what is a furnace, in which the ancient people would burn the bodies of the dead. Many pitchers have trimming at hole, which suggests that once they had cover. Within and near these vessels archaeologists have found teeth, bone chips, and glass beads, fragments of stone and bronze products.

One thing is certain: the age of giant jugs a few thousand years. And the people of Laos believe that once these lands were inhabited by giants, they left mysterious objects. After all, the locals like statues (and even in such quantity!) to create simply could not.

Trail of the dragon

Here and Cambodia. Near the place where the expedition Damian Evans discovered in the forests of the unknown city is a huge temple complex of Angkor Wat. It impresses with its scale. Dimensions of 1.5 km by 1.3 km. along the perimeter it is surrounded by a moat, the width of which is 190 m. This is one of the world’s largest religious buildings. Officially, the complex dedicated to the God Vishnu, was built in the first half of the XII century during the reign of Khmer king Suryavarman II. But a number of researchers have put forward the version that the Angkor Wat is much older. British historian and archaeologist John Grigsby noticed that the temple complex is a terrestrial projection of the constellation of the Dragon, or rather of the whole area of the night sky around him. But there is a caveat: at the position of the main temples of Angkor Wat, these stars were… in 10500 BC This result was given by computer simulation. It is unlikely that the Khmer Rouge in the twelfth century knew how the stars are located on this place for more than 11 years ago! Therefore, scientists came to the conclusion: the buildings were erected on some of the older buildings. But who created them? 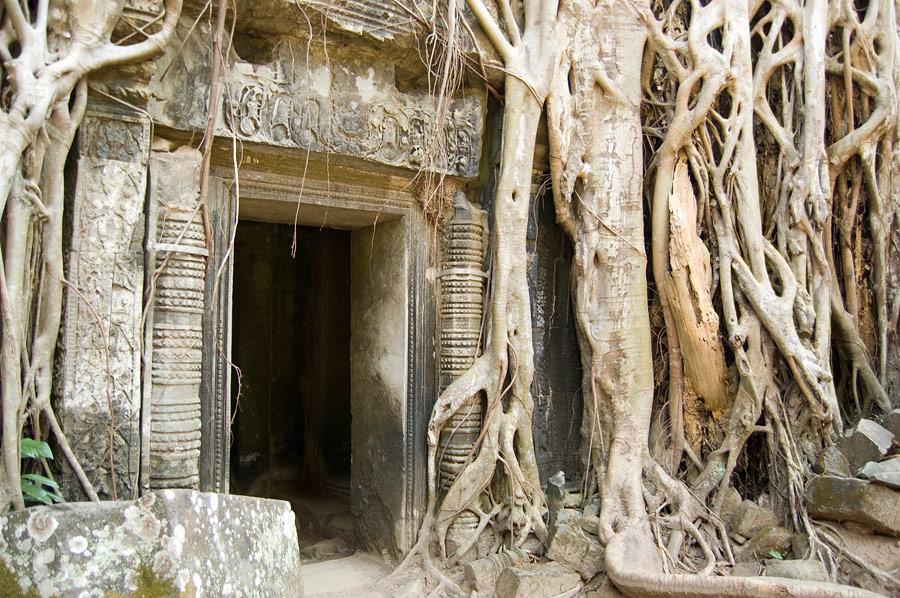 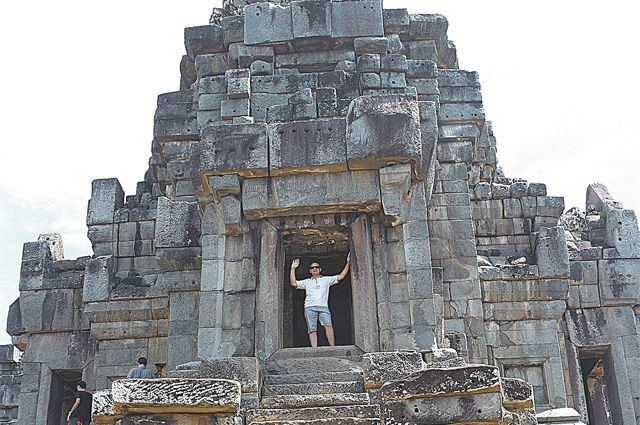 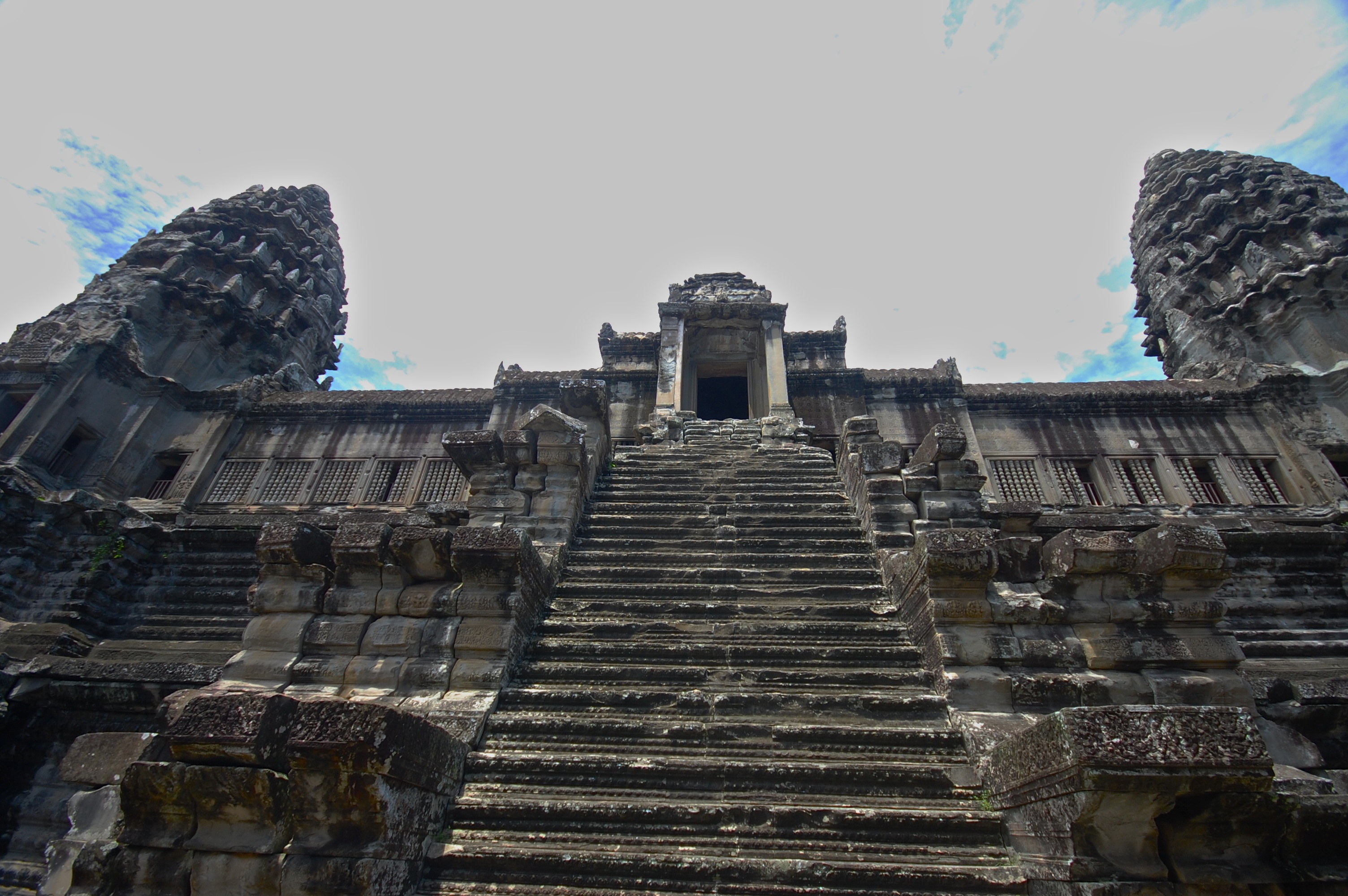 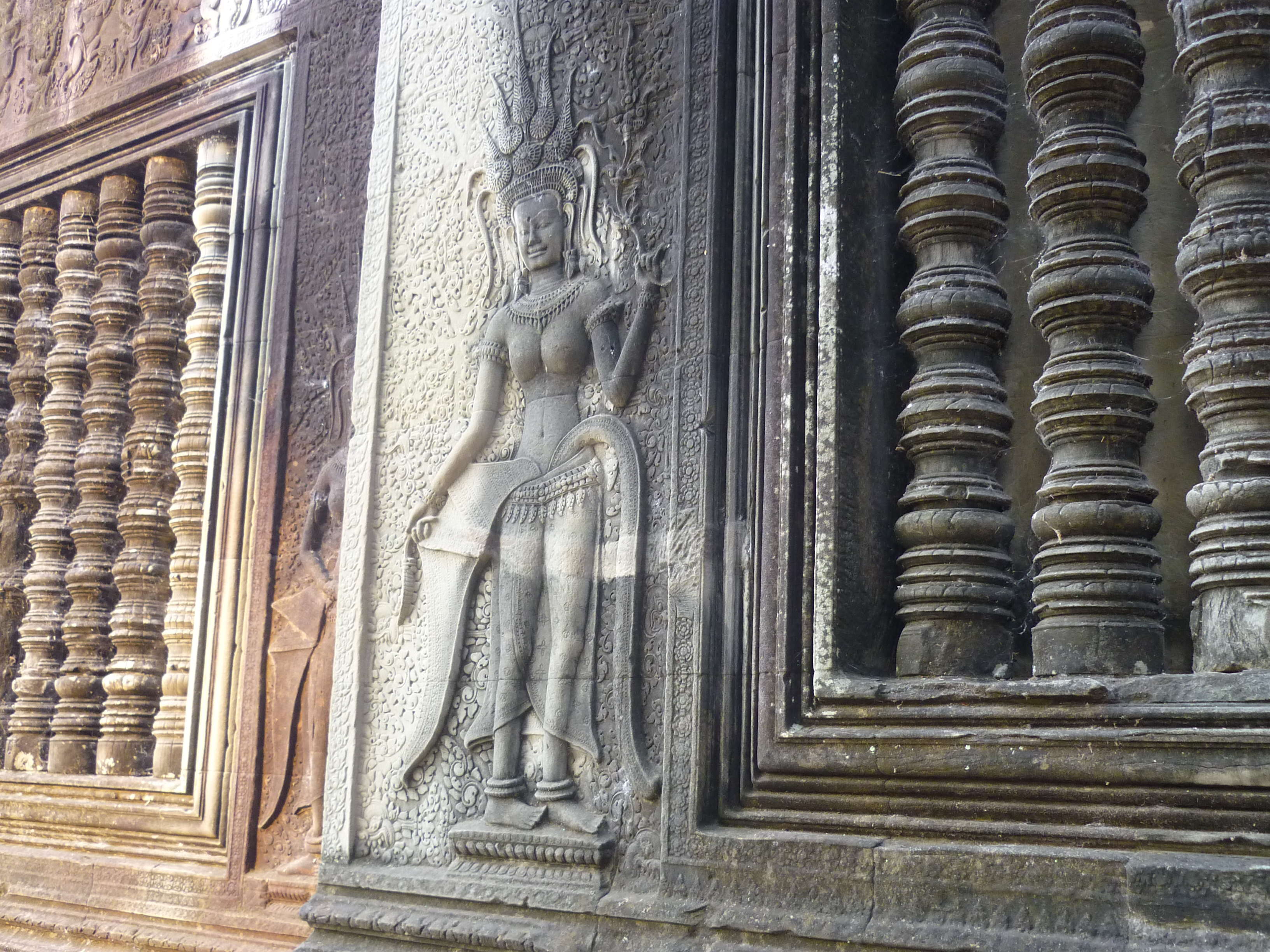 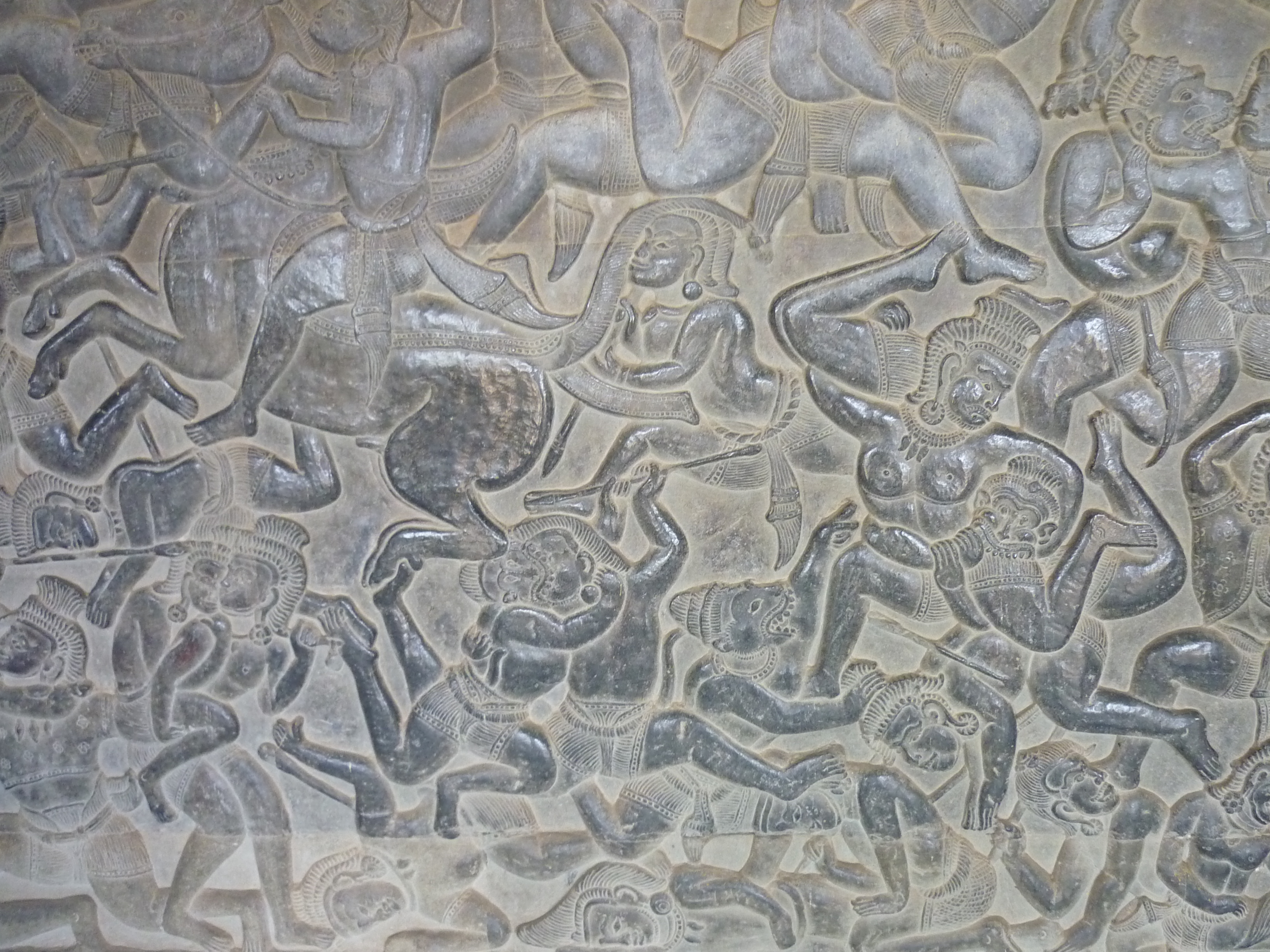 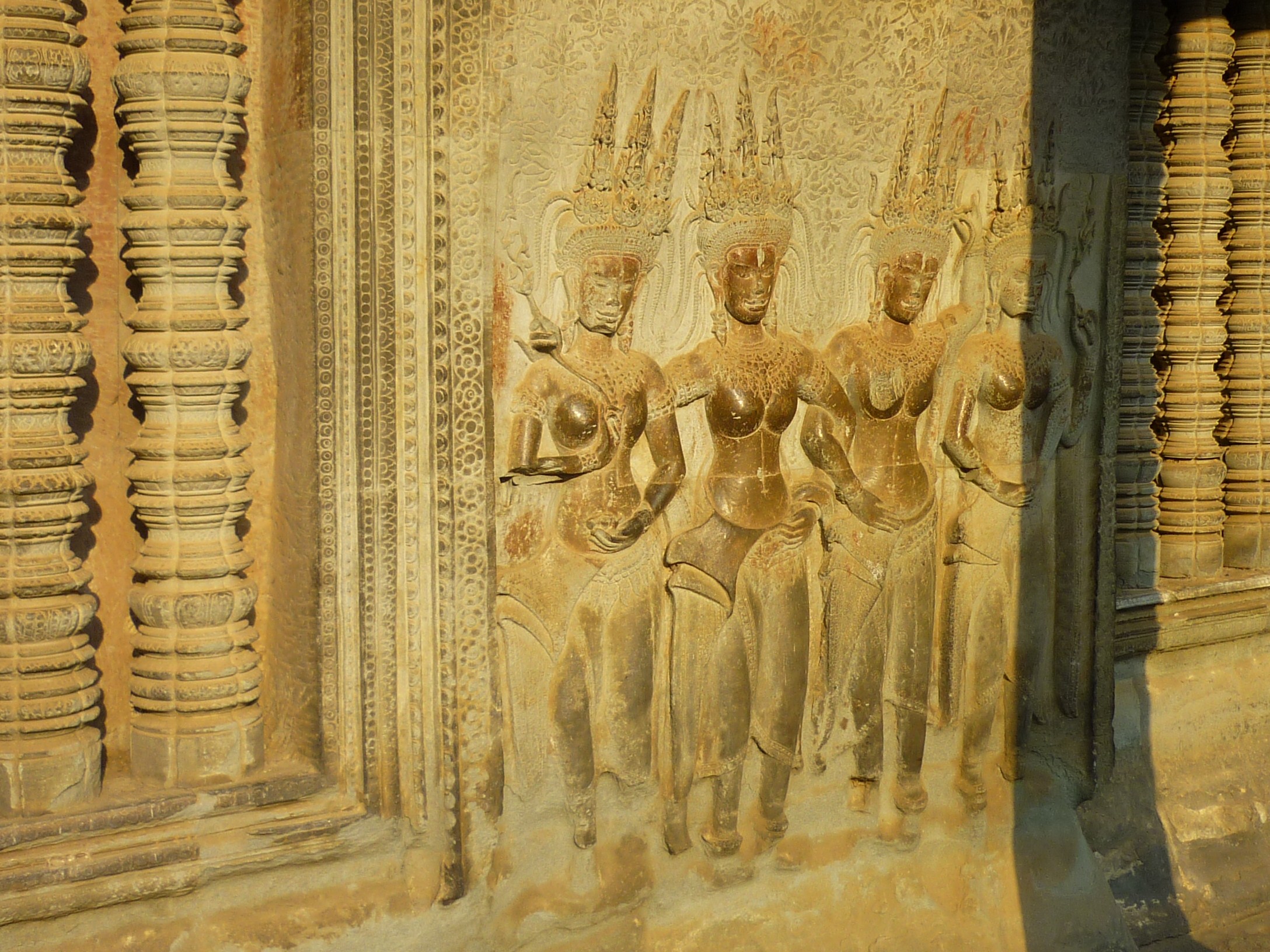 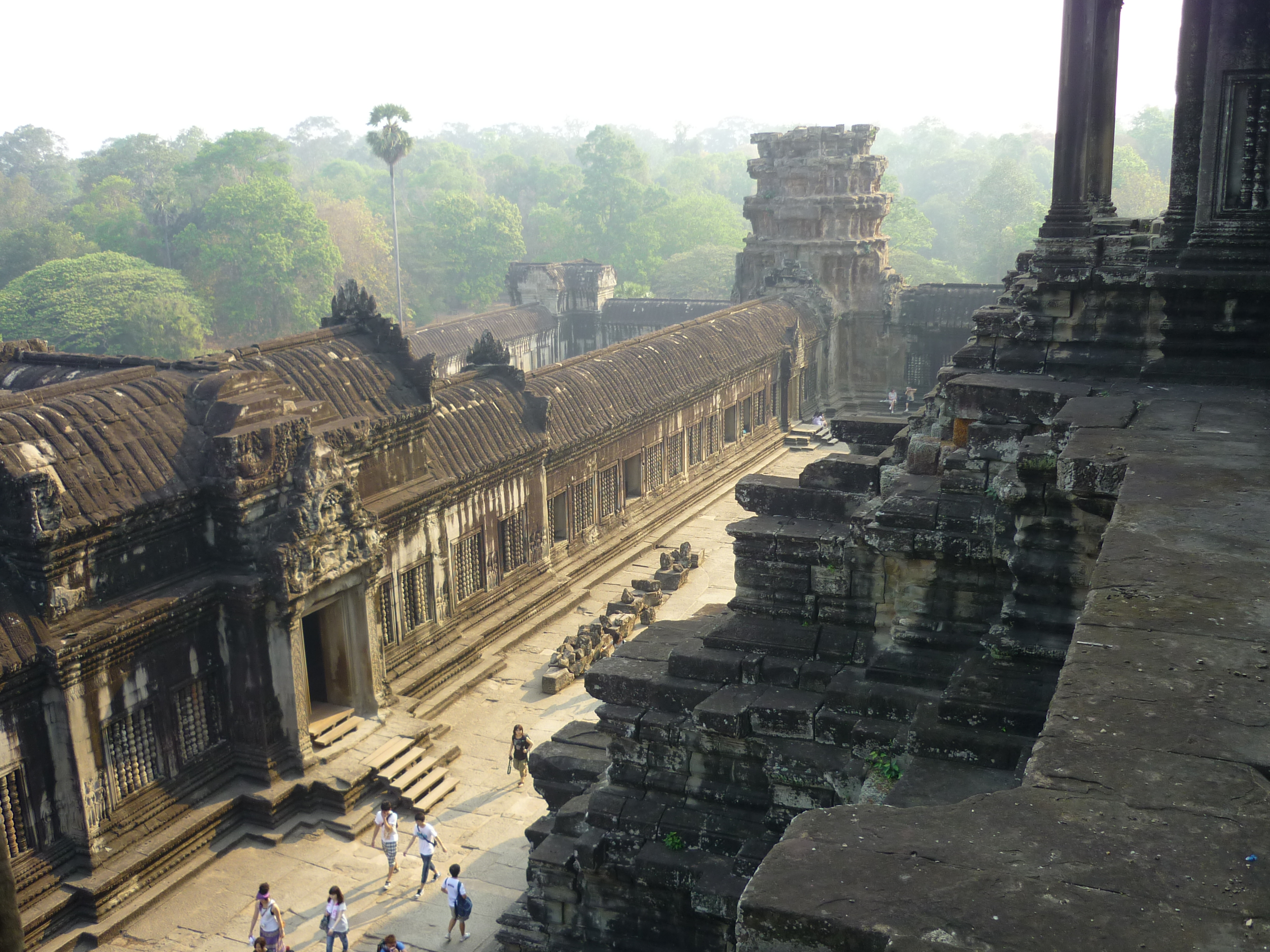 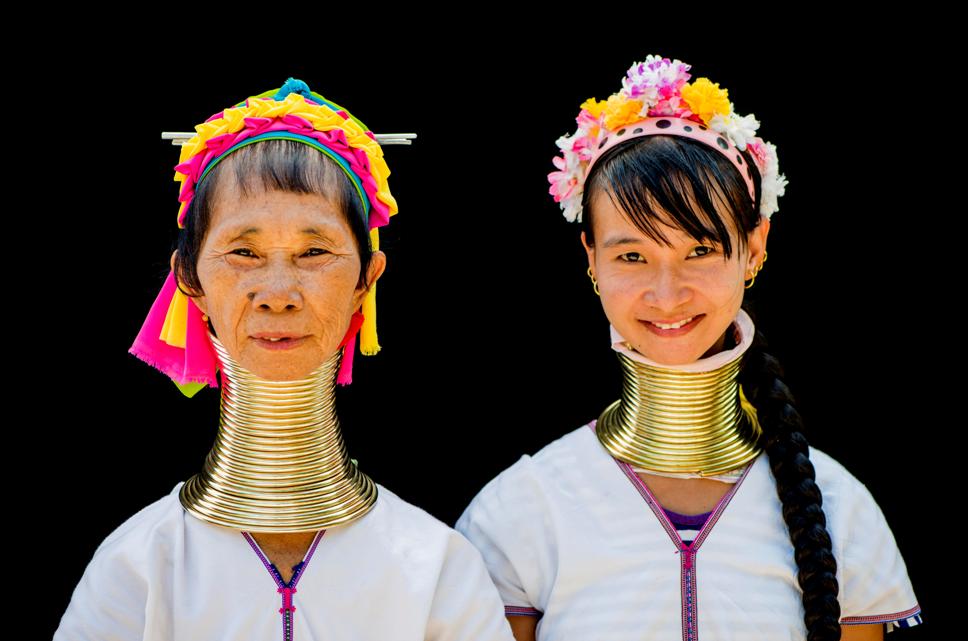 Image of Buddha’s face at UNESCO’s World Heritage Site of Bayon, which is part of the larger temple complex of Angkor Thom, located at Siem Reap, Cambodia. This is one of the temples in Siem Reap where the Hollywood movie Lara Croft Tomb Raider was filmed at.

Hard to believe that these buildings were constructed by an ordinary person. Steps, doorways clearly designed for beings far above us. Blocks of stone weighing up to 250 t have connections. The brickwork was done without mortar, the blocks are so tightly fitted to each other, that seams between them are sometimes impossible to find. Presumably the stones were set in place with the use of elephants, but to repeat that in modern conditions failed. The stones are extremely smooth, almost like polished marble. All surfaces, columns, lintels, roofs covered with carvings. It is made with amazing precision. And the texts of the Scriptures on the stone look like they did laser.

As explained by local researchers or Khmer rulers nor the mere mortals in these buildings lived, and only prayed them to their gods. For housing they constructed wooden buildings around. Complex construction techniques they knew and believed that the Grand structure built by the giants long before the Khmer Empire. The Khmer Rouge came to these churches and began to live nearby.

According to another version, the city of Angkor was founded by the descendants of the inhabitants of Atlantis. It would be extremely interesting to get to cities hidden in the jungles of Cambodia (it is impossible), and to witness the legacy of the Atlanteans.