Historians have refuted the myth of clumsy knights in armor 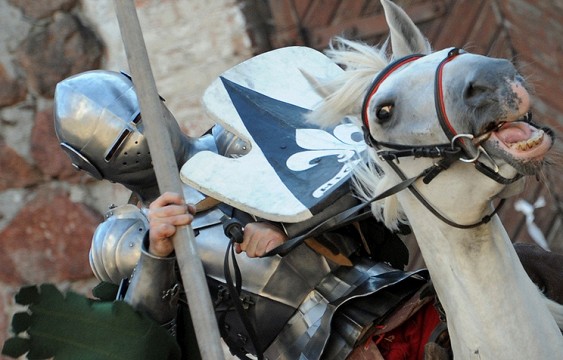 Historians under the direction of Daniel Jacques (Daniel Jaquet) at the University of Geneva in Switzerland showed that the soldiers in armor is not as sluggish as previously thought. To do this, scientists have reconstructed the training lessons of the famous French knight Jean II Le Mangra.

Medieval scholars argued that the armour actually did not make man clumsy and allowed to make such moves that most people did in my entire life. A common misconception about the slowness of medieval warriors tried to refute in the XX century. Educational film created in the Metropolitan Museum in 1924, showed that the heavy knights were pretty slick. However, the specialists had insufficient data to definitively prove their position.

Researchers from Switzerland have recreated the training regime of the French medieval knight Jean II Le Mangra, known as Boucicaut. He won a series of military victories until he was captured by the British at the battle of Agincourt in 1415. There are documents about how he passed his classes, which included jumping on a horse, running, waving an axe or a hammer, and climb the rungs on the hands. The knight was all the time fully dressed in armor.

Scientists asked volunteers dressed in heavy armor, play a workout Boucicaut. It turned out that medieval knights were indeed able to perform various movements requiring dexterity. However, warriors should have high strength and endurance, as the weight of the armor was put on muscles for more energy.

The researchers determined that wearing the armor was gone in two times more energy than walking in normal clothes. However, despite good protection and impressive mobility, the main burden fell on the hands and feet, so the knights were hard to train the muscles of the limbs. Thin slots in the helmet restricted the flow of oxygen, which the warriors quickly exhausted.

Historians have tested only one specific type of armor, but they plan to test a variety of medieval armor to get more data. For example, scientists want to test if the extra clothing under the armor more freedom of movement.