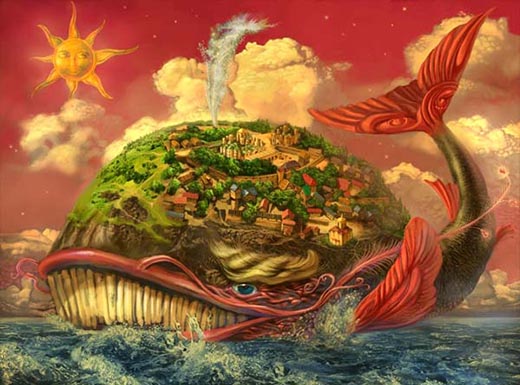 Thanks to the countless books, films, and mid-priced television shows, in our heads there was a fairly steady image of the ancient world. Togas, feasts, Gladiator battles…

All pretty standard. But if you go back in time, you may encounter a completely different world, very different with our views. And all that we show on the blue screen can be very far from the truth.

Let’s start with the period when the earth was infested and dinosaurs, including the Brontosaurus. They became known since 1903 when Othniel Marsh was not able to identify the bones previously discovered Apatosaurus. Due to this error (and Steven Spielberg), a whole generation of dinosaur fans excited by the word “Brontosaurus” and fascinated by the dinosaur that never existed.

At least it did not exist until April 2015, when scientists decided that the Brontosaurus still once walked the planet. The report’s 300 pages, scientists from the New University of Lisbon analysed in Norway for more than 81 different bones of dinosaurs and concluded that it is possible to allocate part of the skeleton of a Brontosaurus as a separate species.

And although it is very similar to the Apatosaurus, it’s a little more narrow and high neck. This difference was sufficient for scholars to distinguish three separate species within the genus Brontosaurus.

They even noted that many of the remains of Apatosaurus, exhibited in museums (including the American Museum of natural history), should be re-examined and possibly reclassified and recognized by others.

Move on to later times, when the Neanderthals lived. It is believed that they mind is not shining. Moreover, the word “Neanderthal” is for us a synonym for “idiot”, a reminder that before man became the chief arbiter of the destinies on the planet, he first had to destroy their more stupid ancestors.

And the image of the Neanderthal man is a classic image of the ice age. But this conception is not entirely accurate. There are data proving that our ancestors were as intelligent as we are.

In 2014, the researchers found that Neanderthals in Northern Europe hunted mammoth and bison in the deep gorges.

which is difficult in logistical terms, the operation required a developed cooperation between the participants and the ability to plan. It was also found a lot of evidence that the tools of the Neanderthals were quite complex and all of them were created using bones, stones and homemade glue.

Also found signs of Neanderthal culture. Archaeologists have found ornaments and pigments for airbrushing bodies that may have been the need to perform complex rituals. In Gibraltar there is even a cave that has preserved samples of Neanderthal art.

With the later time is also associated with many misconceptions. It is believed that in Ancient Egypt had many slaves from Judea. That it is not, will help us to understand one of the most famous early Bible stories – the legend of the Exodus.

After centuries of slavery the Jews had finally managed to escape with the help of the 10 plagues. And though only a few today believe this story is true, it is logical to assume that some of the grounds it still has under itself. If you travel back 4000 years, we will see a lot of Jews wandering the Sinai desert. Right?

But archaeological evidence suggests otherwise. The researchers found no evidence that 600 thousand Jewish families had spent many years in the wilderness.

And when you consider that there are traces of the presence in a particular area, even quite small groups of nomads, such a complete lack of even the slightest signs makes you wonder. Also there is no evidence that at some point, Israel was a large influx of migrants.

The Egyptian government meticulously maintains all the records about all the events of history, including about the migration. If such a number of slaves, who formed more than a quarter of the population of the country, in a moment gone, this surely would have remained of mention in the annals. Because it would mean the labour shortage, and economic collapse. But no, these records are not found.

By the way, in Ancient Egypt treated the slaves much better than in most cultures of the world. Many of them were just debt slaves, who sold themselves to pay debts, and they had a deadline for the end of slavery. Under certain circumstances they lived even better than free peasants. And this is not described in the Bible is a cruel tyrant of Egypt.

Regarding the ancient Romans also a lot of misconceptions. Mol, along with a penchant for violence, they are known for their love of festivals and biorstwa ad nauseam. Roman festivals we submitted mountains of food and rivers of wine.

In fact, the Roman state largely prevented its citizens in the enjoyment. Throughout history Empire has introduced dozens of laws aimed at limiting the amount of money that individuals could spend on entertainment.

In 81 BC, Lucius Cornelius sulla passed a law severely restricting spending on fun. A few years later was introduced another law, prescribing the number and types of dishes that could be on the tables. Other acts could limit everything from the maximum amount of costs of the Banquet to the restrictions people have in other people’s homes.

And since these laws are not always enforced, penalties for violations can be very severe. In Julius Caesar, and the soldiers dispersed of feasting and strictly followed the spending in the markets. Only after Nero these laws have been abolished, and citizens were able to satisfy their appetites.

Another misconception associated with Ancient Rome concerns the fact that in this Empire persecuted Christianity only. This belief has contributed to one of the myths about the Foundation of Christianity – we are talking about the first martyrs persecuted by the Romans.

Preferring to die rather than to renounce their God, the unnamed victim became an example to future Christians. And yet there’s a part of history that is not told in textbooks.

Christians are not persecuted more than other religions. As well as Nero mortally hated Christians, other rulers hated other cults. In 186 BC

The Senate passed a law banning the worship of Bacchus – a new religion based on the worship of Dionysus. As well as later Christians, the followers of the cult of Bacchus slandered, portrayed them as heretics and enemies of the state. They cruelly oppressed. They were tortured and killed.

And they were not the only one. Later persecutions were the druids, the Jews… there was even a period when time stopped persecution of Christians – instead, the victims were followers of other cults. So Christians were not unique people, of persecution, they were among the many who fell under the cruelty of the Romans.

A lot of misconceptions about Stonehenge. It is believed that the ancient stone circle in the heart of a rural part of England was a desolate place, surrounded by a halo of mystery and Enigma.

But this is likely not the case. Probably, once upon a time Stonehenge was surrounded by a large, noisy city. In 2014 a team of scientists has completed the most extensive study of this puzzle.

Surviving in addition to at a distance of 3 km of the giant stones had traces of chapels, grave mounds and other ritual shrines scattered around.

There are traces nearby communities where probably dwelt quite a lot of people. So we can assume that the ancient Stonehenge was a very busy place that is constantly evolving.

And another misunderstanding of the UK. It is believed that black citizens were there only in the last century. However, it is not so: they live there at least 1,800 years.

In 2010, researchers found evidence that Roman York was home to people of North African origin. One of them was “the lady with the iron bracelets. She was buried with lots of jewelry that allows you to take it to a higher class, not as an ordinary traveler or a slave.

But even the “iron lady” pales in comparison to the best known African resident of the ancient city. In 208 ad, the Roman Emperor of Libyan-born Septimius Severus settled there and rules out empires for three years, until his death.

But with the fall of Rome-a multinational history of the country is not over. There are indications that a small community of black people constantly lived in the UK, beginning with the XII century At least some of the remains attributed to the period prior to the arrival of William the Conqueror (1066 ad).

In 1501 Catherine of Aragon was his retinue of Muslims, Jews, immigrants from North Africa who settled in the UK. So the multinational is a typical phenomenon for this country throughout its history.

Now go to the East. It is believed that the silk road is just a huge shopping tract, the symbol of ancient trade. This network of trade routes extending from modern Italy to Indonesia. Only one name evokes the images before my eyes lonely traders, overcoming the hardships of the difficult journey to get to remote corners of the world.

In fact, the silk road was much more than the usual trade route. Along with merchants, it was possible to meet monks, artists, refugees and spies.

Our forefathers silk road gave not only silk. In a world without Newspapers, TV and the Internet he was the medium of communication between different peoples. People passing through him, bringing news, gossip and even Vogue. It was used to spread religious beliefs. The spread of Buddhism as a main religion of Asia has occurred mainly due to travelling along this route to the monks preaching their faith to all the counter travellers.

Of no less importance were refugees. Although rare, the silk road is described as a way for people fleeing from oppression, however, there were a lot.

And this thread has brought culture, science, technology. The great silk road can be exactly as it is written in the textbooks, but traders were only a small part of it.

A lot of misconceptions associated with human sacrifice. Thinking about it, we imagine the bloodthirsty Aztec or Maya who shed blood to the sun. But human sacrifices were common in one culture in Ancient China.

The ancient Chinese were extremely cruel. In 2007, archaeologists unearthed a mass grave filled with the bodies of 47 people, sacrificed to in the afterlife they could continue to serve his master. Early letters the era of the Shang contain information about 37 different types of sacrifices.

If Greece and Rome the practice had been completed a long time ago, the people in China sacrificed until recently.

Even during the Ming dynasty (1368-1644), the wife of Emperor went to the afterlife with the dead ruler. Chinese society was kill people for religious purposes even in the days of sailing of the “Mayflower”.