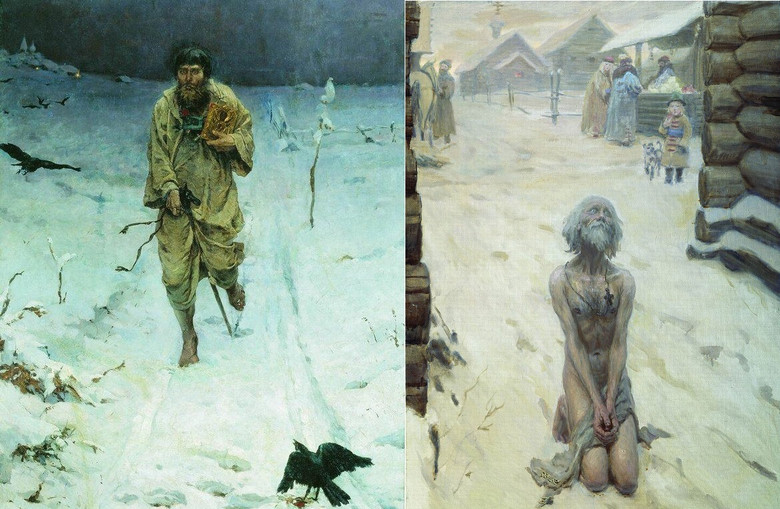 A Holy fool, “crazy town” our ancestors treated with deep respect. It would seem, why such honor half-ragged, carrying some nonsense? However, these people, leading more than, in our opinion, a strange way of life, chose a special way of serving God. No wonder many of them possessed miraculous power, and after death was canonized saints clique.

The fools were known at the dawn of Christianity. The Apostle Paul in one of his Epistles said that foolishness is the power of God. Blessed Wanderers, who refused from the benefits of everyday life, always respected others. It was believed that the mouth of the foolish saith the Lord, many of them have the ability to discern the future.

Special relationship to God’s people recorded in the Byzantine Empire. Fools of Constantinople would publicly denounce the vices of the powerful, their indiscretions without fear of retribution for their insolence.

I must say that those in power have rarely been subjected to repression of the blessed, but on the contrary, listened to their words and “revised” their behavior. The rich ladies of the capital of the Empire even hung out in their home churches, chains of fools, and worshiped them as sacred objects.

However, most revered of the blessed Christ’s sake the Russian land. Indeed, for several centuries the Orthodox Church has canonized 56 “God’s pilgrims”. The most known Maxim of Moscow, the Blessed Martha and John Large Dome, whose warning has saved people from troubles and misfortunes. 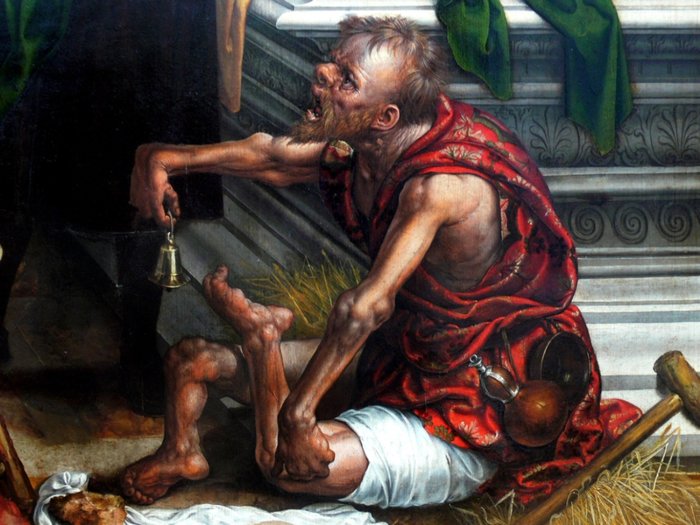 I must say that not only in times of antiquity fools was highly respected. So, at the beginning of the last century, the blessed fool Mitya from the city of Kozelsk was repeatedly invited to the court of Tsar Nicholas II, where he prayed together with him and the Grand duchesses, drinking tea with jam, and then sent to the home of the Royal train.

The image of a blissful, oddly enough, was close to Stalin. While listening to the Opera “Boris Godunov” in 1941, “father of Nations” so imbued with a small role of Ivan Kozlovsky singing the party fool that ordered the actor with the Stalin prize.

Born on the porch

One of the most famous Holy fools in Russia – St. Basil the Blessed (Nag), who lived in the late XV – first half XVI century. It is named after a beautiful Church, erected in the centre of the capital.

Your life path Vasily began on the porch Epiphany Cathedral in Elokhovo village (today it is one of districts of Moscow), where his mother suddenly resolved from the burden.

Since childhood, Basil was struck by the family for his accurate predictions. He was a kind and hardworking boy, and the exploit of foolishness took over at the age of 16, when he was identified as an apprentice in a Shoe shop. One day the owner of Basil came from a wealthy merchant and ordered some expensive boots. When the visitor left, the boy burst into a loud cry, saying to others that the dealer “decided to celebrate the commemoration shoes that never feet will not wear.”

Indeed, the customer the next day he died, and Basil, leaving the cobbler began to wander around Moscow. Soon the fool who walked in summer and winter, naked through the city streets, covering a naked body with only heavy iron chains, became known not only in the capital but also in its vicinity.

The tradition is kept that the first miracle of Basil was the salvation of Moscow from the raids of the Crimean Khan. Through his prayer approaching the capital, the invader suddenly launched his army and went into the wilderness, while before him lay virtually defenseless city. 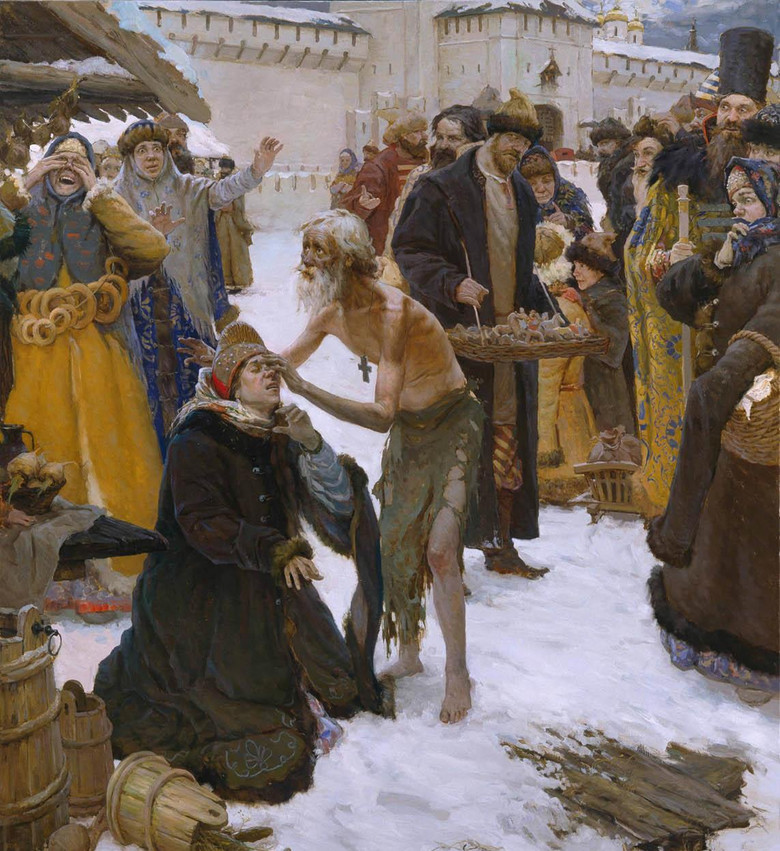 The whole life of Basil were aimed at helping the poor and disadvantaged. Receiving rich gifts from the merchants and boyars, he distributed them to those who especially needed help and tried to support people hesitate to ask others about mercy.

The legends say that even the Tsar Ivan the terrible revered and feared of the spirits. So, after the suppression of the rebellion in Novgorod by order of the king for several weeks in the city were a cruel death. Seeing this, the Basil after Church service approached the king and handed him a piece of raw meat. Ivan sharply recoiled from such a gift, what whacky said that it supposedly the most suitable snack drinking human blood. Understanding the hint of the Holy fool, the king immediately ordered to stop the execution.

I must say that until the death of Ivan the terrible respected fool and listened to his words. When in 1552 Blessed are preparing to depart to the other world, the king together with all his family came to say goodbye. And then, to the surprise of the others Vasili pointed to the younger son Feodor Grozny and predicted that he will rule the Moscow Kingdom. When the Saint died, the king with others nobles carried his coffin at Trinity cemetery, and delivered the body to the ground.

A few years later the Tsar ordered to build near the grave of the Holy fool in the temple in honor of the capture of Kazan, which is now known to us as St. Basil’s Cathedral.

In 1588, the Patriarch job considered Basil to the ranks of the Orthodox saints, his relics were placed in a silver reliquary and placed in one of the chapels of the temple. Today they are one of the main shrines of Moscow and famous for numerous miracles.

The Guardian Of St. Petersburg

Another particularly revered Saint considered to be a Holy fool of Russia, blessed Xenia of Petersburg. She was born in 20-th years of XVIII century in a noble family and was married to a court chorister Andrey Fyodorovich Petrov.

But several years later, spouse of Xenia died and after his funeral the young widow has drastically changed their way of life. She removed the woman’s dress, wearing the clothes of her husband, gave all the property of friends and went exploring the city. Blessed said to everyone that Xenia died, and she, her deceased husband Andrew F., and spoke now only in his name. 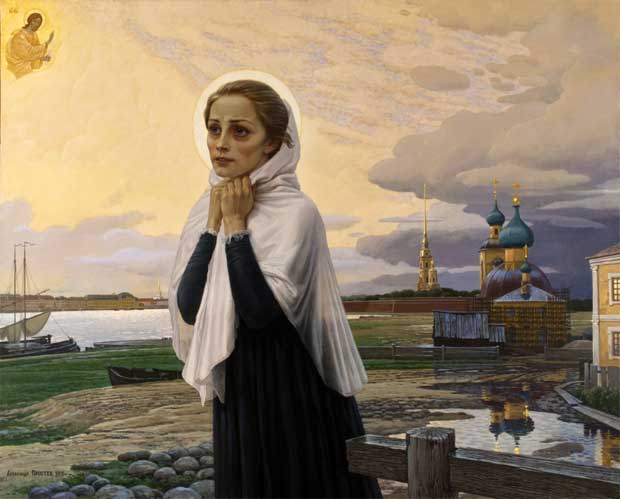 Wandering through the streets, blessed Xenia steadfastly endured all the taunts of urban children, refused alms, only occasionally taking the coin with a “king on horseback” (an old penny), and tried to help people with advice or a timely prediction. So, stopping in the street one woman, Ksenia handed her a copper coin, saying that it will help the fire to extinguish. Indeed, the woman soon learned that in her absence the house took fire but was extinguished very quickly.

Late in the evening, the Xenia went out of town and prayed there in the open field until morning, putting bows on all four sides. Blessed soon became known around St. Petersburg. In a Rich market, it was a welcome visitor, as it was believed that if she tries any product, its owner is ensured a happy trade. In homes where went to relax or dine
Xenia, reigned luck, peace and prosperity, so many people tried to get under my roof a guest.

It has been observed that if Ksenia asked the man something, that soon expect trouble, but if, on the contrary, gifts to any little thing, it promised lucky a great joy. Seeing on the street whacky, mothers rushed to bring their children. It was thought that, if she would caress it, kids will grow up strong and healthy.

Died blessed Xenia in 1806, and after his death was buried at the Smolensk cemetery in St. Petersburg. And soon from all corners of the country to the place of repose reached the sick and the afflicted, desiring to enlist the help of the deceased whacky. In the early XX century on the donations of the faithful was built over the tomb of Xenia spacious stone chapel, and the flow of pilgrims was not exhausted even in Soviet times.

Blessed Xenia of St. Petersburg was canonized Orthodox saints only in 1988. It is believed that it helps all people who come to her for help. Often believers ask her to give them a happy family life and health for their children.