How and why children died in the Middle ages 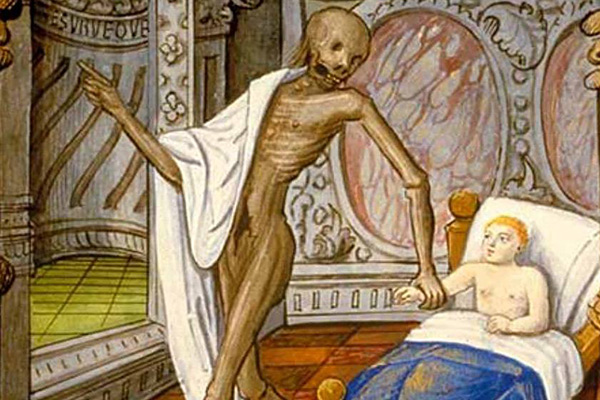 Archaeologists increasingly are asking questions, far from prehistoric eras. How they lived, how sick and died from what the kids in Europe in the Middle ages? And how much better they lived after the “barbaric” middle Ages and the coming of a New enlightened time? How to get information about the life and death of children at the individual brittle bones, scattered over a vast territory? These questions tries to answer the famous British bioarchaeology, expert on the remains and the burial of Rebecca Garland (Rebecca Gowland).

Although the children ranged from 45 to 65 percent of the majority of ancient societies (XIX-XX century), historians and in particular, archaeologists their world is still a blind spot. The younger members of the society were usually deprived of their spaces, social networks and well-developed material culture. The researchers ‘ task is complicated by the fact that in the Middle ages, childhood was not considered a period of special care of the child, his health and development.

In addition, the biological age in ancient times were correlated with social than it is now. For example, under the laws of the Church and the state, the child fell to 10-11 years, worked as a journeyman seven to eight years, and 14 were considered fully adult.

But it is outside the scope. As for the internal content of childhood, the first stage was associated with breastfeeding, the second with an independent game in the house and in the yard, as well as with basic education (obedience to parents, the Christian commandments, the local customs and rules of etiquette). About six years medieval children began to contact with the adult world: the boys dressed and behaved differently than girls, they are assigned more responsible for household responsibilities. 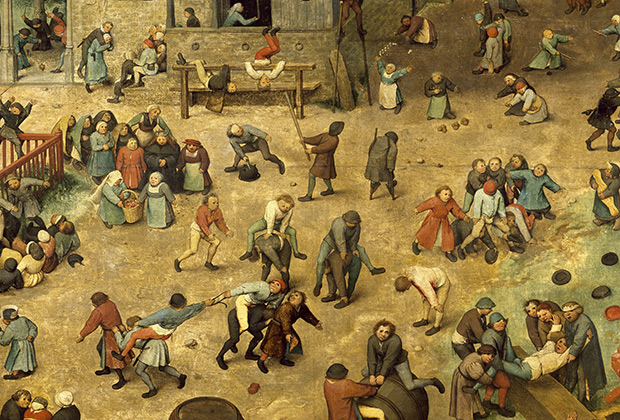 Even games became more Mature and harsh fights wall to wall, counter, dice and chess. About the same time the boys were first allowed to participate in the hunt and encouraged to play war, shoot from a bow. Literacy, not to mention other Sciences, few people studied: for most children, and especially girls, education was limited to the mastery of the craft of the parents and other relatives.

However, marriage in the Middle ages was entered quite late in 16-20 years (early marriage, age of 12 was allowed but the Church did not approve of). It was late age at marriage, particularly for men, created an excess of exuberant youth, which considerably added to the violence of medieval society.

Numerous dangers accompanied the children from birth. If they didn’t die in childbirth and in the first months of life (such was the fate of a quarter to a third of all children), they lay in wait for death by suffocation or accidental injuries. And tight swaddling of infants inhibits the growth (lack of sunlight contributed to rickets).

In the peasant houses had several rooms, and room for livestock. As soon as the children rose to his feet, sharply increased the risk of injury. Many were kicked, bitten and trampled by animals. As evidenced by the reports of coroners and the lives of the saints, most of the children died from suffocation, burns from boiling water, falls from height and drowning (other causes and places of death (see chart). 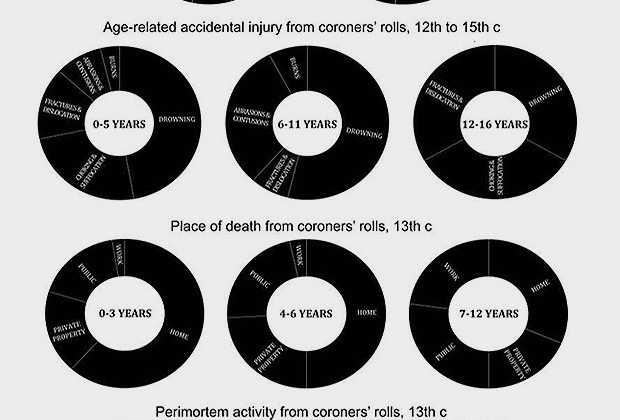 But medieval written sources are fragmentary and unreliable. In search of more serious data scientists are turning to paleopathology — the study of injuries and diseases of ancient people in their remains. And the bones of children — in fact the remains of non-survivors are not able to reach maturity — can tell a lot about the health of mothers, the practice of obstetrics and breastfeeding, and childhood illnesses.

Paleopathology face many problems, sometimes insoluble. The same destruction of bone caused by various diseases — for example, fragile and spongy tissue becomes due to rickets, anemia and deficiency of vitamin C. the Rapid growth and healing of bones in childhood leaves almost no marks of injury. Before coming of age, it is impossible to distinguish the skeletons of boys and girls. Finally, the predominance of organic substances in children’s bones accelerates their decomposition in the soil. Scientists who work with surviving to the present day remains, it is necessary to be extremely cautious about diseases and mortality.

To establish significant patterns, Gowland and her colleagues have tried to collect the maximum information about the children’s remains in England, Scotland and Wales for the years 1000-1700. In articles and reports by archaeologists, and databases information was gathered about the graves 4647 — rural and urban cemeteries, monasteries, parish churches.

The skeletons were divided into three age groups adequately reflect the medieval boundaries of childhood, adolescence and youth: from birth to five years, six to 11 and from 11 to 16 years. Despite the dominance of the monastery (characteristic of the upper strata of society) and city of tombs (due to the fact that a large part of the excavation is now carried out in cities, archaeologists believe that they were able to obtain a relatively complete picture. Special attention is paid to pathologies that best represents the human condition: scurvy, rickets, osteomyelitis, osteoarthritis, tuberculosis, syphilis, fractures and cranial trauma, periodontal disease, and some others. Archaeologists have estimated the prevalence of a particular disease and the average number of patients (due to injuries, infectious and other diseases) in different centuries. 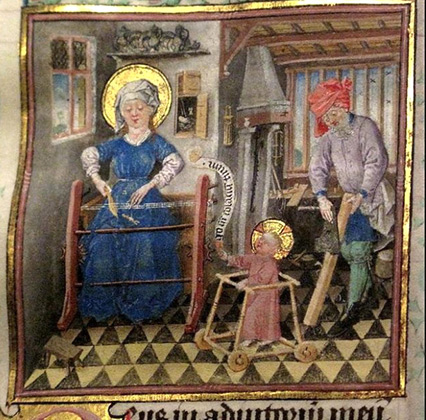 Contrary to stereotypes, children were not dying in pain (or, conversely, did not boast of good health) all of the Middle ages — mortality and morbidity is constantly changing, depending on historical processes. From the XII to XIV century, traces of ailments and challenging life on the bones got bigger the population of the country (and throughout Europe) to grow, food was scarce, and in congested cities and towns broke out of the epidemic. The worst was in the first half of the XIV century, when these troubles was added a series of crop failures (“the Great hunger”).

However, the black death (mow more than one third of Europeans plague), paradoxically, fixed the position: real income has doubled, unemployment has gone on for many decades, and food shortages in the past. Bone health (i.e. health of their owners) in the years 1350-1500 amazingly stable despite all the misery of the hundred years war and civil conflict (“War of the Roses”). So, the climate and the economic stability have more effect on the lives of the people than the socio-political upheavals!

The pacification of the country and the wise fiscal policy of Henry VII took the Kingdom to prosper: high returns, rich harvest, generous donations to the poor, the low rent for the land. The incidence tends to a minimum — and among adults and among children.

However, after 1540, the number of patients and early deaths of children rises sharply. Scientists see only one reason: the reformation. For all the progressiveness of the Church policy of Henry VIII and Elizabeth I — the establishment of a national Church and worship in English, literacy and religious activity of the population — reform dealt a severe blow to the welfare of society.

In the Middle ages the Catholic Church was actually responsible for the social protection of the population — no laws on this subject, the English king issued. Financial assistance to the poor and sick was declared essential to salvation from hell after death. In 1500 five percent of the population living in poverty, survived only by Church alms. The poor were treated in hospitals in monasteries, and with them was brought up an orphan. 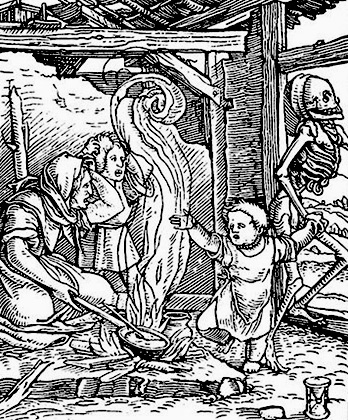 Death carries away the child (engraving by Hans Holbein the elder, 1583)

And all of this infrastructure — health, education, social assistance, charity — was actually destroyed by the stroke of a pen when the state confiscated Church property and closed the monasteries. No state institutions that can take care of the poor, had not been established. In addition, in the second half of the XVI century started to rise steeply prices (pan-European phenomenon associated with the influx of precious metals from the New world) again went poor harvests and plague.

All of these adverse processes are bound to affect children’s health. Among infants, more and more cases of rickets — apparently, due to the fact that internally is hard work mother longer swaddled them (to wear in the field). In children 6-11 years, there has been increased growth oculography bones — a sign of the frequent injuries associated with the need to work from an early age. Adolescents in the XVI century the nature of injuries was the same as in adults: another indicator of the need to work without any discounts for age. Finally, more signs of tooth decay (in children’s diet became less meat and dairy products, increased the proportion of grain).

Scientists once again showed that the end of the middle Ages, the reformation and the Great geographical discoveries were not for Europe “a beacon of light in the darkness”. On the contrary, the children, the most vulnerable members of society, were deprived of alms, children’s homes, and the opportunity to get a free monastic education. The reformation led to more serious fluctuations in health status than all the crop failures, climate change and economic turmoil of the past centuries. Only in the XVII century, when the state and society have adapted to the “shocking” conditions, the situation began to improve, but Britain waited nearly a century of violent conflicts.