How did the Egyptian pyramids were built? 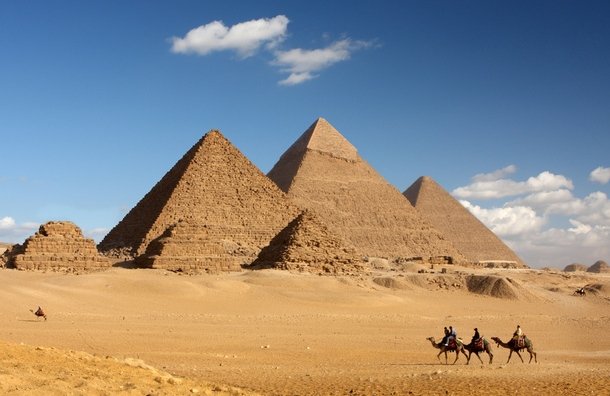 Scientists like to present their hypotheses as irrefutable truth. This applies to the Egyptian pyramids, about which we are told that the ancient Egyptians built them with the help of bronze saws and axes, sawing out giant blocks and lifting them with the help of ropes to a huge height along a previously filled in a huge mound.

And these world scientists, Egyptologists, do not even bother to prove their allegations. Assertions that do not stand up to any criticism. For example, the English engineer Peter James also listened to and read the statements of scientists about the methods of building the ancient pyramids and asked a simple question – how the pyramids were constructed from the point of view of engineering.

Immediately a lot of simple questions without answers to which can not be answered about the method of construction.

How in the Bronze Age, using only bronze tools – saws, axes, chisels, it was possible to cut out these huge blocks for building pyramids. Not to mention the fact that the bronze in ancient Egypt was in short supply, and for this type of work tools would require a huge amount in view of the wear of bronze tools.

We are told that during construction, tree trunks were used as rollers for moving heavy blocks, but from where, in a deserted Egypt where there are no forests, did so much wood appear? To build a pyramid alone, it would take hundreds of thousands of tree trunks. Hundreds of thousands to use them as forests, as rollers for moving blocks. Where did this tree come from? No answer. On ships he could not be brought from Africa, too many and too many small places and rapids on the Nile. That would implement such a massive delivery of forests along the river.

To build the pyramids used a lot of stone blocks, and where the quarry in which they mined? Where the production waste of these blocks, which should be three times more than the volume of all used blocks. The volume of one pyramid is 27 million cubic meters, it turns out that the waste should be 50 million cubic meters, at least, but they are not. If several pyramids are built, then there are hundreds of millions of cubic meters of waste, but they are not.

Scientists claim that one pyramid was built in 20-30 years. If the calculations are made, it turns out that only one 6-minute block was allocated for laying one block with a volume of 1 cubic meter per pyramid. Do you believe that? Do you believe that the blocks in the pyramid were stacked with ropes, rollers, mounds – one in 6 minutes?

James is not new from builders, architects and engineers who ask such questions. Many experts asked scientists to drill the walls of the pyramids to a depth of 40 meters, to understand the principle of construction of these structures, but all these requests always give one answer – it is forbidden, it is impossible.

And moreover, all the questions of engineers, architects and builders, Egyptologists, archaeologists and scientists, respond with a smirk and contemptuously, approximately so – “What difference does it make to you how they were built? The main thing is that they were built and that’s enough.”

None of the world’s scientists, never tried to reconstruct the method of building pyramids. From the beginning to the end. Find the deposits of copper, develop its extraction from the mine, create workshops for smelting copper and create tools for labor on an industrial scale sufficient to begin work on the construction of the pyramids.

Find copper, extract ore, smelt copper, create saws, hammers, axes, chisels, cut out a stone block with these tools, drag it tens of kilometers using wooden rollers and ropes, and even beforehand deliver these trees from Africa on ships of the same design that Was in Egypt. Deliver the blocks to the pyramid and build it by raising huge blocks to a height of more than 100 meters and all this without using modern technology at 40 degree heat.

There are many questions, the answers are not just small, they simply do not exist at all. Why should we blindly believe the words of scientists, words that are not confirmed by anything other than the authority of these eminent and famous scientists. Famous in their own words and nothing more.