How did the Vikings make sea voyages without a compass? 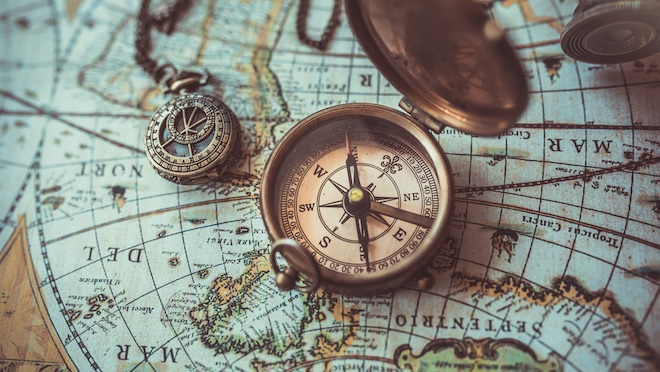 For a long time scientists could not understand how the Vikings traveled from Scandinavia by sea, overcoming thousands of nautical miles. It is known that they were fine navigators and in the 9-11th centuries reached Russia and Ireland, and in the 10th century Greenland was discovered. However, how did they orient themselves, overcoming such large distances, if the compass was discovered only in the 16th century?

The sagas and legends speak of “solar stones” that were used for navigation even in bad weather – the stones helped them to find the sun in the sky, even if it was completely covered by clouds. In particular, this is mentioned in the saga of the settlement of Greenland from the life of King Olaf, who ruled Norway in the late 900’s. It is interesting that in 1948 a copy of the Uunartok disc was found, which in combination with that solar stone (Solstenen), and could serve for navigation. According to scientists, the device was a sundial with marks-sides of the world and carvings, indicating a change in the shadow.

The first person who suggested that such stones really existed was an archaeologist from Denmark Torvild Ramsku. In 1969, he said that it could be a natural crystal, polarizing light (for example, calcite). In the process of observing the cloudy areas of the sky, rotating the crystal, it was possible to find those regions from which, due to Rayleigh scattering, completely polarized light emanates. When carrying perpendiculars to the line that connects these areas, you can detect the sun hidden behind the clouds, having learned its exact position.

Archaeologist Gabor Horvath and his colleagues made computer simulations of viking travel from Bergen in Norway to Hvarf on the southern coast of Greenland – then this sailing took about three weeks. The model took into account 1000 such trips and the use of calcite (as well as cordierite, tourmaline and aquamarine) for navigation – an error was indicated for each stone. The journey began at the time of the summer solstice or the vernal equinox, cloudiness was set randomly. The model showed a very high probability of the success of this mode of navigation – 92%. However, this indicator was only valid if the stone was checked every 3 hours – with the correction of the rate every 4 hours the probability of success fell to 32-58%, to reconcile every 6 hours – up to 10%. Scientists suggested that it was a mistake in navigation that led to the Vikings landing in 985-1000 on the coast of Newfoundland in North America (the territory of modern Canada). Later they founded the Vinland settlement there. Either way, the Vikings discovered North America and explored its territory long before the voyage of Christopher Columbus.

Although the theory that calcite was the “sun stone” is not proved (it was not found in their graves or in places where settlements were located), this assumption explains well the navigational abilities of ancient seafarers. Moreover, calcite was found among tools on the sunken ship of the British in 1592, and there are also data on the use of polarizing stones by pilots in the 20th century, when the compass could malfunction.