How many nuclear bombs lost in the ocean? 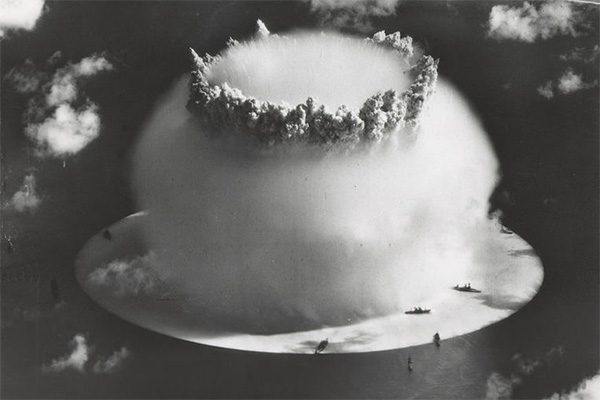 Creating nuclear weapons and nuclear technology, the superpowers repeatedly experienced related incidents. During the years of the cold war in the World’s oceans got (and stayed there) reactors, bombs and torpedoes with nuclear warheads.

The Americans left in the ocean for two nuclear submarines. April 10, 1963 during deep-sea trials in the Atlantic, 200 miles East of Cape cod sank the submarine “Thresher” (a nuclear reactor). The boat lies at a depth of 2560 metres.

May 22, 1968 on patrol in the North Atlantic disappeared submarine “Scorpion” (on-Board reactor and two nuclear torpedoes). The boat was then found at a depth of over 3000 meters, on the ground of 740 kilometres South-West of the Azores. The cause of death of the boat, by the way, has not been elucidated so far.

But the main “nuclear exploits” of the us military in the seas, of course, related to aviation.

February 14, 1950, the bomber B-36 taking off with the Alaskan base Also, participated in full-scale simulated nuclear strike on Soviet territory. In the role of “purpose” was used in San Francisco. On Board the bomber was a regular nuclear bomb Mk.IV. From it were extracted plutonium weapon, but the bomb was a shell of metallic uranium and 5000 pounds of explosives.

The aircraft was in the area of bad weather over the sea off the coast of British Columbia, frozen, he refused three of the six engines. The crew, seeing this thing, dropped a bomb (“normal” part detonated, as there is evidence: the flash of an explosion seen from shore), and then left the car falling into the water.

On 10 March 1956 over the Mediterranean sea disappeared, the bomber B-47 taking off from Florida. On Board the plane were two nuclear bombs. No trace of the aircraft, and nuclear weapons not been found so far, the official version looks like “lost at sea off the coast of Algeria.”

28 July 1957 transport aircraft C-124 transported from Delaware to Europe three curb nuclear bombs and plutonium charge for another. Over the Atlantic off the coast of new Jersey, the plane began to lose power, two engines of the four stalled. The crew threw into the ocean two of the three bombs about a hundred miles from Atlantic city.

On 5 February 1958 near Savannah (Georgia coast) the F-86 collided with the strategic bomber B-47. The fighter crashed, and the damaged B-47 held out in the air and returned to base. However, this had to ditch in the Atlantic thermonuclear bomb Mk.15 (output power when blasting about 1.7 megatons). There she lies still, covered with mud, — a search came to no avail.

5 Dec 1965, near Okinawa from the aircraft carrier “Ticonderoga” because of the strong pitching fell into the water floating attack aircraft a-4 Skyhawk tactical nuclear bomb and sank at a depth of about 4900 meters. The Pentagon did not recognize this episode until 1989.

In 1960, the United States in terms of “further aggravation of the international situation” began “operation Chrome dome” (Chrome Dome), involves the creation of a system of continuous duty in the air strategic bombers with nuclear weapons on Board. The aircraft were in constant readiness to strike against the planned targets deep in the territory of the USSR (service of this bomber is shown, for example, in the film Stanley Kubrick’s “Dr. Strangelove”). Not all of these flights ended with good.

January 17, 1966 Palomares from the Spanish on duty in the air bomber B-52G collided with the aircraft and the KC-135. As a result, “the environment” were four thermonuclear bombs such as Mk.28 (B28RI) capacity to 1.45 megatons each. Three of them fell on land (and two collapsed and contaminated with plutonium is a 2.6 square kilometer of territory), and one drowned in the sea. She was found and raised in 81 days after the disaster.

Despite harsh criticism of the practice of regular duty bombers with nuclear weapons on Board, which began at the end of the incident in Palomares, operation Chrome dome” turned only after the incident on January 21, 1968 in the area of the Greenland Thule airbase, which caused an international scandal. It collapsed on duty B-52 with four nuclear bombs on Board. The aircraft struck the ice and went to the bottom part of Baffin Bay. The us military staged the whole operation to lift parts of the lost weapons, and then reported that all four bombs fetched. Years later, however, the publication of the results of the examination showed that there were found only three components of ammunition, the fourth and lies somewhere in Greenland waters.

Information on possible losses of the Soviet and Russian nuclear weapons is still highly classified. However, regularly reports (though unconfirmed) incidents with nuclear weapons aboard aircraft.

One time thanks to the former Deputy chief of intelligence of the Pacific fleet kontr-Admiral Anatoly shtyrovu widely dispersed reports of the death in the spring of 1976, the Tu-95 Soviet long-range aircraft that crashed into Terpeniya Bay (off the southern tip of Sakhalin). On Board the aircraft allegedly contained two nuclear warhead, subsequently raised from the ground by American submarine special purpose “Greyback” (according to another version, “Greyback took only the equipment and the bombs lie on the bottom).

However, the defense Ministry does not confirm the holding of the flights of strategic aviation in the area in 1976, Rosatom (the successor of the Soviet Minsredmash) incidents with nuclear facilities in the area denied, and the message about the crash “unbreakable” with the well-known registers of accidents and disasters long-range aircraft. Information about duty of Russian aviation with nuclear weapons is still closed, so further investigation of this story is difficult.

Volume of patrolling Soviet aircraft were more modest American, respectively, purely statistically, the number of incidents, no matter how they were classified, it was still less than the United States. But without exception are known (murder will out) the results of accidents of nuclear submarines and the disposal of reactors.

In 1965 off the coast New Land was flooded reactor compartment of the submarine K-19 (project 658), the victim in 1961, near the island of Jan Mayen severe radiation accident. In 1966, the neighborhood was flooded reactor compartment from the submarine K-11 (project 627А “kit”), which in February 1965 in the repair of accident with release of radioactivity due to irregularities in the charge of the reactor. In the fall of 1967 in the Gulf of Tsivolki (North-East coast of New Land) flooded the screen Assembly of reactor the world’s first atomic icebreaker “Lenin” suffered from damage of the active zone.

In March 1968, to the North of midway Atoll in the Pacific ocean sank at a depth of about 5000 meters diesel-electric submarine of the Pacific fleet, the K-129 (project 629А). The cause of death is not known so far. On Board the boat were three ballistic missiles R-21 with monobloc nuclear warhead capacity of about 1 megaton, and two nuclear torpedoes. One or two torpedoes were raised by the Americans in 1974, however, to raise the rocket failed.

8 April 1970, during the exercise “Okean-70” there was a fire at a nuclear torpedo boat K-8 (project 627А), located in the Bay of Biscay. On April 12, after a long struggle for survivability, the submarine sank at a depth of about 4700 meters. At the bottom were two reactors and, according to various sources, four or six torpedoes with nuclear warheads.

In 1972 (according to other sources — in 1974) in the Novaya Zemlya trough of the Kara sea flooded the reactor recovered after the nuclear accident in 1968, the nuclear submarine K-140 (project 667A “Navaga”).

10 September 1981 in the Kara sea flooded nuclear submarine K-27, project 645. Pilot a ship with two reactors RM-1 with liquid metal (alloy of lead and bismuth) coolant in may 1968, suffered on a combat heavy radiation accident, after which the operation became impossible. After a long period of sludge boat with the reactor compartment, filled with 270 tonnes of bitumen, sank at a depth of 75 meters. At the moment there are plans for its recovery and disposal.

3 October 1986 at the strategic submarine K-219 project 667АУ “Burbot”, located in the Atlantic East of Bermuda due to the depressurization of the mine explosion the fuel of one of the missiles. The boat surfaced, but after a long struggle for survival sank on the night of October 6 at a depth of 5600 meters. At the bottom of the ocean were two reactor, two nuclear torpedoes, and (according to various reports) 15 or 16 ballistic missiles R-27У, each carrying three warheads with a capacity of 200 kilotons.

7 April 1989 in the Norwegian sea after a major fire at a depth of 1858 meters sank the boat K-278 Komsomolets (project 685 “Fin”, multi-purpose nuclear submarine with a diving depth of 1000 meters). At the bottom were two nuclear reactors and two missile-torpedo “Squall” with nuclear warheads.

Sank in August 2000 in Barents sea the nuclear submarine K-141 “Kursk” was raised as the K-429, drowning in the Bay Saranda (in the Pacific) in July 1983. But on 30 August 2003 near the island Kil’din (near Murmansk) sank at a depth of 170 meters nuclear submarine K-159 project 627А, which is hauled for disposal in Severodvinsk. At the bottom were two more nuclear reactors.

There is another “wonderful” source — radioisotope thermoelectric generators (RTGs). This is something like the “nuclear battery”: uses the energy from natural decay of radioactive materials to generate electricity. Widely used as Autonomous power source. Several of these objects were drowned in the sea for different reasons, with at least one (lost in 1987, the Sakhalin Cape) not found so far.