How much power do you need before Moses parted the sea? 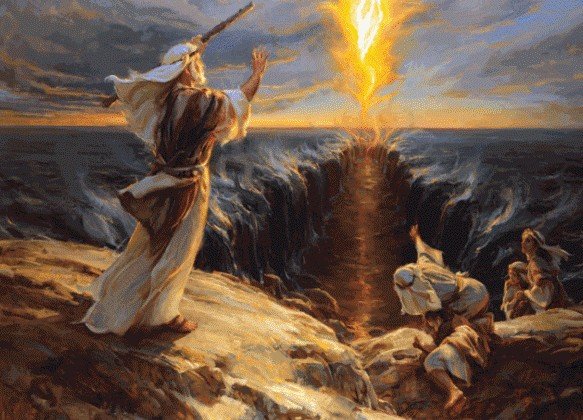 At the University of Leicester, it was calculated how many watts it would take to open the Red Sea, and how many Newtons to keep it all the time needed to go from shore to shore, as in the biblical legend

In the traditional pre-New Year issue of the journal of the British University of Leicester Journal of Physics Special Topics, physics students sort out from the point of view of science the most diverse phenomena familiar to us from books and films. In one of the articles entitled “Power for a miracle,” physicists turned to the biblical story of Moses moving with his flock through the Red Sea.

According to the Old Testament, Moses waved his staff, a powerful wind rose, which raised the sea waters by a wall, creating a passage through which the Israelites could go to Egypt. Physicists have calculated the amount of power that would be needed to do this. According to their data, this is about 5.73 * 1013 watts.

For comparison: the power of the rocket on takeoff is about five orders of magnitude smaller. They also figured out how much force in Newton would be required to keep the water wall for the time the fugitives passed to the other side. This is 8.63 × 1012 newtons. For comparison, the air presses on each of us with a force of about 2 × 105 Newtons.

The exact place of passage, referred to in the Bible, is still the subject of scientific debate. The authors of the work took the main version for the passage through the Aqaba Strait. Modeling with Google Earth showed that the distance that had to be crossed by the Israelis is about 19.03 km. The depth of the sea in this place is from 70 to 205 meters.

Based on this data, scientists were able to calculate how much power would be required by the wind to create a passage about 800 meters wide. To understand how much time the wind would have to keep the passage open to pass about 2.4 million people, scientists took into account the average size of the human body, the minimum distance between people walking and the average walking speed. In total it would take 6.46 hours, the physicists calculated.