How the Mayflower Pilgrims Created the USA 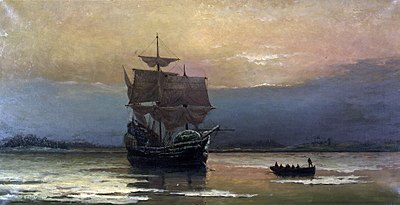 On September 16, 1620, 102 English colonists sailed for North America on the Mayflower. These deeply religious people did not accept the Anglican Church and sought to achieve greater freedom of religion. Having crossed the Atlantic in two months, the pilgrims signed the so-called “Mayflower Agreement”, the principles of which formed the basis of later American documents. It was with the journey of the Mayflower that the purposeful colonization of North America began.

English colonists managed to gain a foothold in North America only at the beginning of the 17th century. In 1606, King James I bestowed the charter of the Virginia Company. It included the London and Plymouth branches, engaged in the development of the northeast coast of America, including the delivery of British colonists to the continent. Numerous immigrants traveled to the New World with families and even entire communities at their own expense.

It was assumed that the Plymouth Company would manage the settlements that are located in the northern part of the continent, and the southern territories, along with all the colonies, would go under the jurisdiction of the London Company. As a result, the Plymouth agents were not very successful in settling distant American lands, but the London group achieved visible success, organizing a colony on the southern coast of the Chesapeake Bay.

In 1607, a town called Jamestown grew up on the banks of the James River.

At first, it seemed that the venture was doomed to failure: the colonists who arrived from England did not find any deposits of precious metals, or the north-western passage to India. Investors in the metropolis were understandably disappointed because they did not see any sources of get rich quick. The colonists themselves also had a hard time: interruptions in food supplies, a hostile environment of Indian tribes, repeated outbreaks of malaria – all this naturally reduced the morale of the settlers.

On the other hand, virgin forests, stretching for more than 2,000 km along the entire Atlantic coast, abounded with everything necessary for the construction of houses and ships, and the rich nature satisfied the needs of the colonists for food. The more and more frequent calls of European ships into the natural bays of the coast provided them with goods not produced in the colonies.

For the sake of income, the colonists established the import of goods into the metropolis. In 1608, the first ship sailed to England with a cargo of timber and iron ore.

In 1610-1620, things began to improve: the colonists discovered a promising agricultural crop – tobacco, and began to cultivate it with enthusiasm. They defended their land rights against the Indians for many years and achieved self-government through a representative assembly. Within a few years, Jamestown became a thriving city thanks to the extensive tobacco plantations established there in 1609, which became the main source of income for residents.

In the conditions of economic recovery in agriculture, there was an acute shortage of labor. The colonists had to hire hired workers (servants) and even use slave labor on a small scale. In 1619, a Dutch ship arrived in Virginia with the first black Africans, twenty of whom were immediately bought by the colonists as servants.

Blacks were made slaves for life, and slave status in Virginia and Maryland became hereditary in the 1660s.

“Not all settlers came to America for gold or other benefits, many emigrated in search of religious freedom,” notes American historian Robert Rimini. – After the Protestant Reformation and religious wars between representatives of various sects and religions, persecution for religious reasons was in the order of things. In England, monarchs led the Anglican Church, which opposed the Roman Catholic Church, although Anglicanism retained many Catholic rites and rituals. Protestants who felt that the Church of England needed to be cleansed of such attributes became known as the Puritans. Even more radical Protestants sought to separate from the Church of England altogether. ”

Exactly 400 years ago, an event occurred that went down in American history as the beginning of the purposeful colonization of the continent by the British. On September 16, 1620, 102 pilgrims sailed from Plymouth to the New World aboard the Mayflower galleon. These people chose to leave the bosom of the Anglican Church, being dissatisfied with its religious hierarchy, dogmas and rituals, which, in their opinion, were too reminiscent of Catholic ones. Initially, a group of English religious dissidents, striving for even greater religious freedom, fled to Holland, whose authorities showed religious tolerance. The pilgrims, however, never managed to adapt to the local way of life. After receiving permission from the London Company to settle in Virginia, they left Holland, sailing to the New World.

The two-month voyage in the Atlantic Ocean was difficult. Due to storms and gales, the ship deviated far north. Two people died on the way. One child gave birth