How to survive after a shipwreck 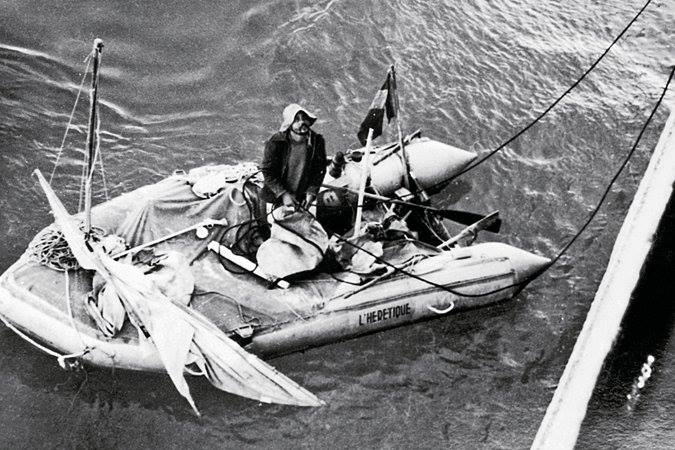 Alain Bombing was the doctor on duty in the hospital of Boulogne, when brought back 43 of the seafarer – victims of a shipwreck at the pier Carnot. None of them could not be saved. Allen felt bad that nothing could be done for them. He began to collect information on shipwrecks.

It turned out that all over the world in such accidents annually kill about 200 thousand people. Of these, 50 thousand time to move to the lifeboats and rafts, but still after some time die a painful death. And 90% of victims die within the first three days after the shipwreck.

And he decided to cross the Atlantic in a tiny inflatable boat. Without water and food – to prove that a person able to survive after a shipwreck.His boat he called a “Heretic”. It was a tightly inflated rubber punt 4 m length 65 cm and width 1 m 90 cm, with wooden beam and light wooden flooring at the bottom. Moved “Heretic” with quadrangular sails about the size of 1.5 x 2 m Retractable keels, oars, mast, hoist and other equipment was extremely simple and maloudobnye. No rods, no nets, he did not take with him in principle, decided to make a improvised, as befits someone shipwrecked.

In the first night Bombing was caught in a storm. In a rubber boat to actively resist the waves impossible, to bail the water out. Scoop to take with him he guessed, so use a hat, quickly became exhausted, lost consciousness and woke up in the water. Boat completely filled with water, the surface was only the rubber floats. Before the boat was afloat, he scooped the water two hours: every time a new water nullified all of his work.

Soon as the storm subsided, burst sail. Bombing replaced it with a spare, but after half an hour the oncoming squall broke new sail and took along with all mounting hardware. Had the Bombing to sew old, and go under him all the way.

It is believed that without water man can not live more than 10 days. The bombing only on the 23rd day of sailing was able to drink fresh water, hitting a strip of heavy rain. How did he survive? Used sea water. “Alas, more than five consecutive days of sea water can not drink, – said Alain. – I say this as a doctor, otherwise you can ruin the kidneys. Need to take a break for at least three days. And then this cycle can be repeated.

In these three days of Bombing get their water from fish. The bombing cut the meat into small pieces and wrung out the liquid through his shirt. The result was a slurry of fat and juice, nasty taste, but fresh. With large fish easier: her body can make cuts and immediately drink the juice. To avoid scurvy, the sailor was fed daily on plankton – it is rich in vitamin C. “it was Enough to throw overboard a normal sock on the rope, so during the day to produce a total of two tablespoons of plankton,” insisted the Bombing. In contrast to raw fish it good taste. The feeling that eating lobster or shrimp”.

Bombing refused rainproof workwear. He was wearing the usual pants, shirt, sweater and jacket. The Frenchman believed that he and so superbly equipped. After all, when the ship sinks, people usually do not have time to think about your wardrobe. On the second day after the departure was soaked through, the Bombing found that even wet clothing retains body heat. Thus was born another rule: “a shipwrecked should not remove clothing, even if it got wet”.

Sixty five days of sailing after the Bombing reached the island of Barbados. He has lost 25 kg, the level of erythrocytes and haemoglobin bordered on deadly, he was diagnosed with serious vision problems, the nails on the toes fell, the whole skin was covered with a rash and small pimples. The body was dehydrated and extremely emaciated, but he reached the shore. On his boat was still there the supply of products, the safety of which has been officially certified at the end of the experiment he never touched the NT.