Humanity survived the fall of a giant comet 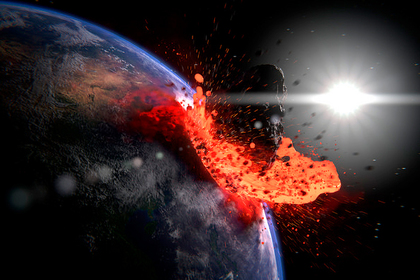 Scientists at the University of Chicago have found evidence that about 13,000 years ago a comet with a diameter of over 100 kilometers fell to Earth. The cosmic body broke up into fragments that “bombarded” North and South America, the west of Europe and Asia. This caused an “asteroid winter,” the massive extinction of the Pleistocene megafauna and abundant forest fires. This is reported in an article published in The Journal of Geology.

Traces of the catastrophe were found in the analysis of ice cores extracted from the Greenland glaciers. Thus, an anomalous amount of platinum was found in the ice layer formed in the late Dryas (the last stage of the last glaciation), which indicates that this element was thrown into the Earth’s atmosphere as a result of a catastrophic event. At the same time, salt and dust concentrations have increased in cores, which indicates that winds are increasing due to global climate change.

Also in the deposits of ice, there were signs of global forest fires. An increase in the content of combustion products of biomass – ammonium, nitric oxide and acetate was detected. The area destroyed by fire vegetation is estimated at 10 million square kilometers (9 percent of the total biomass of the Earth). In particular, most of the pine forests burned, on the site of which poplars grew.