In Abkhazia found the skull of a mysterious animal 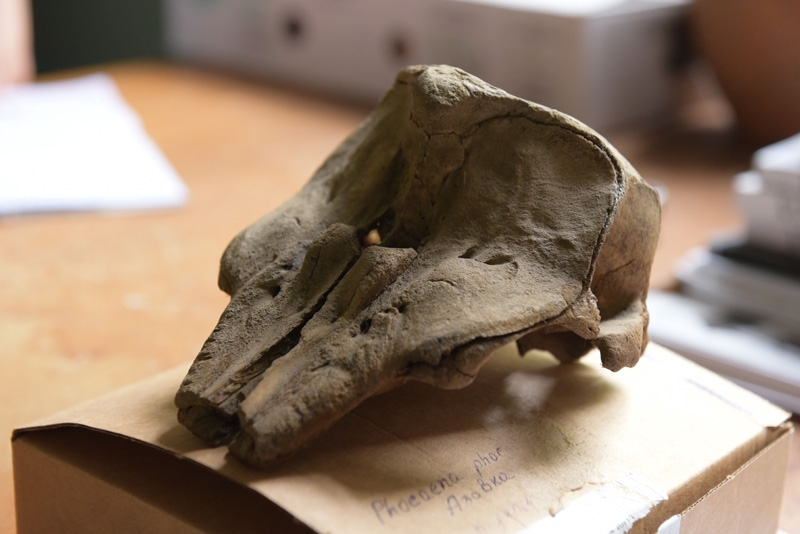 About the problems of archaeology in Abkhazia and the inability to identify some findings said the senior researcher of ABIGI Ruslan Bartsits.

Dolphin with no teeth

According to Ruslan Bartsits, among the Abkhazian archaeologists keenly felt the lack of specialists.

Paleontologists in Abkhazia no, — said the archaeologist. — Findings related to the animal world before humans, come across anyone who leads the excavations, but to say exactly what it is, we can’t. For example, an archaeologist Zurab Jonze not so long ago found the vertebra of impressive size and a fragment of the rib of a large animal. What is difficult to say. In the fall I will carry to Moscow for examination here is the skull. It was found in a swamp Colchis workers of the farm. My colleague Victor Malanje says that it is the skull of Dolphin mass stranding of harbour porpoise, but look, it has no teeth, and a feeling that was not. In my version, this skull of a giant snake, which could be found here. It lacks the anterior part of the jaw, where they could be fangs. What is an animal crawling or swimming – obviously, at the place of attachment of the spine — not from the bottom, and the back of the skull.

— Let’s try to reconstruct life in Abkhazia before the advent of man. Were carried out there are dinosaurs, mammoths?

The fragments are so large animals are rare, again due to the lack of specialists in this area they can’t identify. The raw material base for the giant herbivores were not here, they need plain, vast pastures, where they could migrate. But mammoths were able to get here in the ice age. The glacier was going and drove all life to the South, leaving behind the icy wilderness. Dinosaurs also could be driven, but not the largest. In Georgia, under Kutaisi, there is a reserve Staple”, where preserved fossilized dinosaur footprints. I was there, saw them. The clarity of these tracks is striking, is seen as located the toes, claws. It is there, so here, too, the dinosaurs were probably.

And that comes from the paleontological finds?

— Fossils of plants, fish and shellfish. A lot of them. In Abkhazia such finds are ubiquitous. First they drew the attention of engineers, who blew up here the rocks when laying a military road in the nineteenth century. Marine fossils are generally weight. Well, look, some old jellyfish washes ashore and ” a strong wave in a viscous ground. It decomposes, it fills with dust, are millions of years old, and we have a clear imprint of sea creatures. In childhood, I remember I found strange stones convex shape similar to khinkali with dotted pattern, folded them at home. They still kept me. This fossil molluscs. The coastal strip is unstable, the sea changed its shape many times, so it found them and in the coastal strip and in the mountains.
Where to find the Argonauts

— The black sea so much changed their Bank?

Yes. 30-40% of our archaeology in General on the bottom of the sea, are the ruins of the Greek colonies, the same dioskuria, for example. But the dolmens are mostly located in remote hilltops. Maybe when they were built, the coastline was quite different, and these buildings were situated in open coastal areas. By the way, it is possible that this is one reason why not found traces of the Argonauts. All of the expedition that hoped to find them, searched the shore, but maybe you need to look in the mountains?

In Abkhazia a lot of caves, excavations have been conducted there?

— Another problem. Their fellow cavers we have, working newcomers of the expedition, black diggers is also not asleep. Remember, as a child I was shocked by my first discovery. I was a teenager and lived in the village Barmish of the Gudauta district. There, in the tract Mazahua there is a large open cave. The boys climbed into it and found traces of the black diggers. They did not even bother to dig that unearthed. They were looking for, of course, gold and jewels, the rest was not paying attention, and I found the classical chops of ancient man, such as in the history books, with a cutting surface, the protrusions, that was easy to hold in hand. It was an unexpected delight, a story we studied in school, were not just written in books – it is all around us. In to explore the caves, along with evidence of human encampments, are found the bones of cave bears, tigers.
The place of exile for early Christians

In the first centuries of our era, Abkhazia was a place of exile for Christians of the Roman Empire. It is written in any text about Abkhazia, but how much do we know about this period?

— Quite a lot, mostly biographies of our saints. The Apostle Simon the Canaanite, and John Chrysostom does not quite fit in with the exiles for the faith, but the era reflects. Simon the zealot with Andrew the first-called preached here voluntarily, choosing a missionary path, John Chrysostom was exiled after the Roman Empire adopted Christianity. It was not faith, and that he spoke of the Imperial family. Know then wallowed in debauchery, and the preacher couldn’t keep quiet about it. Exiles for their faith? No, but that era. We know that St. John Chrysostom, the convoy legionaries had to smuggle in Pitsunda, but John was old, he drove, he died in Camano.
Secrets of the Pitsunda temple

— What other problems are encountered by archaeologists?

— The mass of historical sites are located in residential areas. On ancient burial grounds are cemeteries, as they dig up? My pain aqueduct in Pitsunda. On it the water from the mountains fell in the Pitsunda temple. I wanted him to completely recover, to collect from the ceramics from which it was made, where there are not enough large pieces to finish building of modern synthetic materials, but in the end, I broke up with this idea.

The aqueduct goes through private gardens, the people digging do not give, I am afraid that we have something valuable we find it, and they will always regret it, do not do that, workers are paving the road and just break down Roman pottery, not realizing its value. In one yard man does the toilet on the pipe of the aqueduct supplied – punched him with a crowbar. When greenhouses in Pitsunda is also built on the site of the aqueduct, I went to authorities, told them to wait, given the work of archaeologists, but they have all quickly the money invested, it is necessary to build.

I really want to explore the dungeon Pitsunda temple. They exist. In the XIX century it descended people, preserved written sources. It is believed that there, in addition to the catacombs was a tunnel to the chapel on the shore. The chapel that was demolished long ago and is located on the bottom of the sea because of the sea. Guide the underground passage is cypress Avenue. It confirmed my observations. Part of the Foundation stones of the temple are periodically covered with a touch of salt in this place. In 1975 when the temple was done, the concert hall and established the authority of the last loopholes in the catacombs earlier. In the eighties the research was conducted in the temple. Ultrasound checked cavity.

Moscow specialists have left the conclusion that there is a lot of space and there are objects, absorbing the sound, perhaps the boxes are sealed with wax. When I go to the authorities, seeking permission for the excavations, saying that it may be part of the Patriarchal library or hidden religious values, perceive me as a dreamer and just shrug off, what is science, and archaeology in particular, is not the dream to find his treasure?!