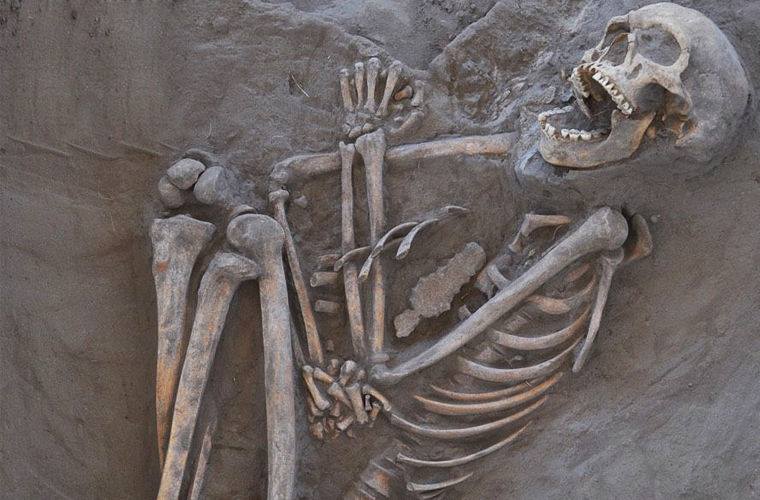 In Australia found an 800-year old skeleton of a man supposedly killed by well-aimed throw of a boomerang. This is the first such case in the practice of archaeologists. The bones were found two years ago in South Wales due to the fact that the river eroded the shore.

Skeleton men of 25-35 years, were buried in the fetal position, perfectly preserved. It was called Yakutia that the language of the local tribe baanante means “older brother”.

The researchers found that Kakuta last time before his death, had dined on crawfish and possum. Study of his bones revealed that violence was an integral part of the lives of men. He had two partially healed traumatic brain injury and fresh wounds without signs of healing, apparently, deadly.

The native had broken ribs and injured forearm, and the right side of the skull there was a long wound extending from the frontal bone to the mandible. Typically, such traces leaves a sharp metal weapon. But the radiocarbon analysis showed that Yakutia died in the XIII century, about 600 years before the Europeans brought metal weapons on the Green continent.

To determine the cause of death, paleoanthropologists from Griffith University studied the traditional weapons of the aborigines. Scientists reasoned that because the head wound of the deceased was 15 cm long, the blade of the weapon must be of a similar size. As it turned out, most it was like a wound inflicted by a sharp edge of a long wooden boomerang. This type of weapon indigenous Australians used in the early twentieth century for hunting. This boomerang was heavy and long, and his “blade” in size resembled a sword.

Rock paintings in Australia show that the local men used the boomerang for hunting and warfare for thousands of years.