In Belize are the largest excavations of the Royal Maya tomb 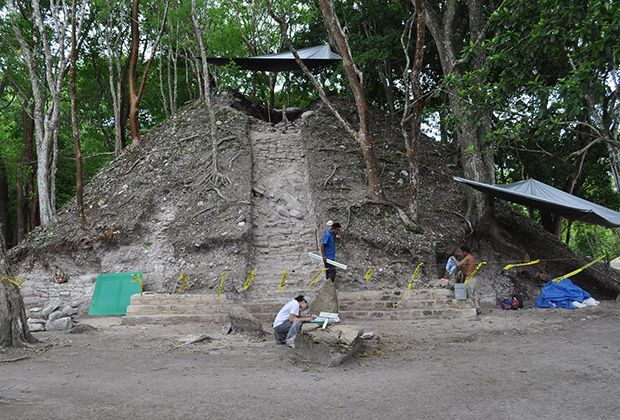 Archaeologists have discovered the largest “Royal grave” for a hundred years, excavations of Mayan ruins in Belize. In addition, they found the remains of the monarch, his treasures and steles with hieroglyphs that tell about the mysterious “Snake dynasty”.

Burial found among the ruins of Xunantunich, a town to the mopan river in Western Belize. In the last century, the hegemony of the Mayan (600-800 years), he acted as an important religious center. Unearthing the Central staircase a large structure, archaeologists discovered the tomb at a depth of six to eight meters.

In addition to the remains of a man aged 20-30 years, in the burial were the bones of jaguars and deer, jade beads, obsidian knives 13 and 36 ceramic vessels. The uniqueness of the tombs lies in the fact that it is not attached to an existing building, and immediately laid the plan of the building — as it did in Ancient Egypt.

Panel with hieroglyphs around graves pointed to a number of unknown facts from the history of the dynasty of the Snake (Kan). Ordered their Prince Kan II in the year 642, and they tell us about the death of his mother and little-known representative of the dynasty — Uaxaclajuun UBA cane, who ruled from 630 to 640 a year. Finally, judging by the panels, there was a dynasty of Snakes in the city Cibane (on the Yucatan Peninsula), and only then settled in the town of Calakmul. It is not clear how these entries appeared in Xunantunich, probably at some point, he was under the authority of the dynasty.