In Bethlehem they found a mural of an unknown angel 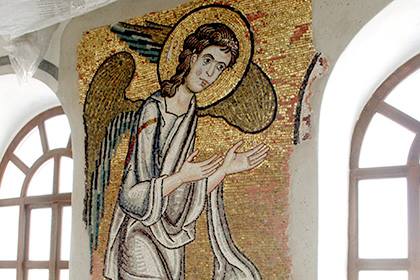 In the temple on the alleged birthplace of Jesus Christ, the restorers discovered hidden many hundreds of years under a layer of plaster mosaic.

The discovery was made by Stringari Silvia (Silvia Starinieri), assistant restorer. She slowly held thermographic camera on plaster covered wall of the Church of the Nativity in Bethlehem, and noticed an unusual bulge on one of the sites.

When Stringari and her colleagues carefully removed the plaster, they saw the shining face of mother-of-pearl, and then the “Golden” plates of halo. Scientists have discovered an angel with a height of two and a half meters — the seventh in the decoration of the Church.

Just since 2013, the Italian restorers were able to return the original appearance of dozens of mosaics, including images of Jesus, St. Joseph, the virgin, the 12 apostles, saints and old Testament patriarchs. All of the mosaics are signed with the name of Basil. According to scientists, they ordered the artist in the era of the Crusades the king of Jerusalem Amalric I and the Byzantine Emperor Manuel I Komnenos.

The last restoration of the Church occurred in 1479. Since then the temple was in disrepair, and in 2011, the Palestinian authority urged all Christian denominations to put aside their differences and hire a team of restorers for the salvation of the Church.