In Brazil, found a mushroom of the dinosaurs 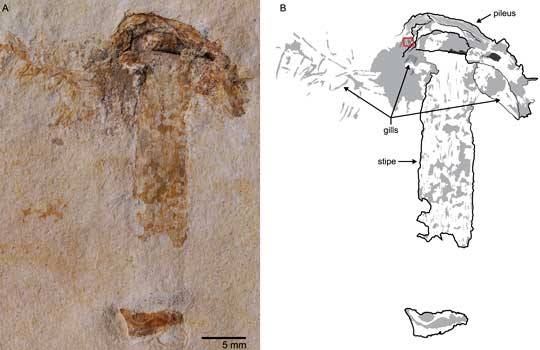 Archaeologists have found an ancient mushroom, literally miraculously preserved in the limestone of the Brazilian Crato formation, whose age dates back 115 million years.

It was not possible to find out exactly the taste qualities and even the regularity of the fungus – its fruit body was completely replaced by minerals, and the dispute, which is usually identified with such samples, was not found in the breed. And yet paleontologists are almost sure that the mushroom of the dinosaur era was a close relative of the famous hallucinogenic fungi Psilotsibe, widespread in Russia

The oldest mushroom, also the first fossil fungus from the collapsed supercontinent of Gondwana, was named Gondwanagaricites magnificus. Its generic name is made up of the name of the supercontinent and the Greek word agarikon, which stands for the mushroom itself. Specific name, translated from Latin – magnificent – emphasizes the degree of preservation of a single sample.

“Gondwanagaricites magnificus is the oldest fossil evidence for the existence of plate-shaped fungi and is the only fossil preserved by mineralization,” said Dr. Sam Heads of the University of Illinois, “The unique sample extends the geological range of spreading of plate-shaped fungi by about 14-21 million Years and confirms their presence in Gondwana in the era of the Early Cretaceous. ”

According to him, the mushroom, grown up during the Cretaceous on land, somehow found itself at the bottom of a warm saltwater lagoon, where it was quickly filled with a fine-grained carbonate sediment. Soft tissue of the fungus was replaced by iron sulphide – pyrite, which eventually gave way to goethite.
“Prior to this discovery, the most ancient fossil fungi were found in amber of Southeast Asia and dated 99 million years ago,” said study co-author Dr. Andrew Miller, also working at the University of Illinois.

“They were immersed in sticky wood tar and preserved in the form of amber inclusions,” Dr. Heds added, “This is a much more likely scenario for conservation of the fungus, since the resin dripping from the tree directly onto the forest litter can easily retain such samples.”

The systematic membership of the oldest plate-shaped fungus in the world is still a mystery.

“Although Gondwanagaricites is undoubtedly a plate-shaped fungus of the order Agaricales, its membership in a particular family is currently impossible to establish, because during the CEM-study (the comparative electron microscopy) of the sample, the presence of basidiospore was not detected,” The common habit of Gondwanagaricites resembles the fungi of the family Strophariaceae, in favor of placing it in this family also speak of small dimensions, a dense shape of the fruit body, a thick hat, But the similar morphology has a number of other families of fungi, and it is possible to distinguish them from each other only by detailed studies of the spore.As the Gondwanagaricites have not been observed, we refrain from relating the new genus to a specific family. “