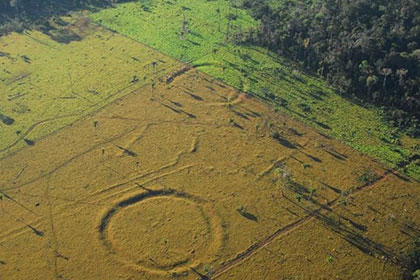 Brazilian, British and canadian archaeologists have discovered in the tropical forests of the Amazon lowlands hundreds of earthen constructions reminiscent of Stonehenge.

The age of the objects is estimated at 1.4-2.3 million years. Most of them are geoglyphs drawn in the earth, circles and squares with a length of about 300 meters. To detect objects managed with the aid of drones, which explored areas of the Amazon lowlands after deforestation..

Scientists obtained data indicate that the ancient inhabitants of South America burned or cut down forests, then their place formed an earthen geometric pattern. Education, which was able to observe the scientists, reminded geoglyphs located in the heart of the British Stonehenge.

The latter appeared about 2.5 thousand years, which, according to archaeologists, outlines the framework of cultural-historical backwardness of one world from another. While scientists agree that the Brazilian geoglyphs occurred sporadically and probably ritual function.

Stonehenge, located in the British County of Wiltshire, was built around four thousand years ago. The most severe of its stones weigh 30-40 tons. The final purpose of the complex is still unknown. In ancient times, as shown by the studies of archaeologists, the basic design of Stonehenge was moved from Wales to Wiltshire. Most likely, the monument was transported to the ancient Welsh, because, as suggested by the archaeologist Mike Parker-Pearson of University College London, he was the “physical embodiment of ancestors.”