In Britain found the predecessor of Stonehenge 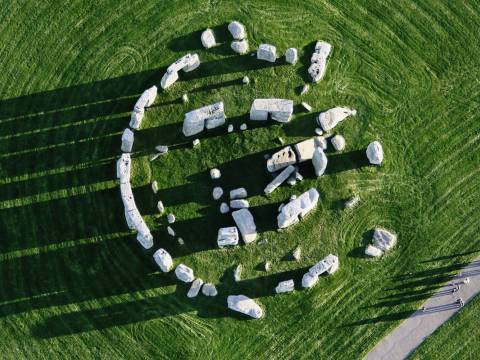 Scientists have discovered in the UK Neolithic complex, which were established several centuries before Stonehenge.

The complex is located 2.5 km North-East of Stonehenge. It consists of two segmented ditch, forming concentric circles with an external diameter of about 200 meters. Element of the monument can also be a system of earthen ramparts. To date, scientists have mastered the 17 percent of land, while the overall safety of the complex is unknown. It is assumed that it was erected about 5,650 years ago — long before Stonehenge.

According to researchers, the complex could be used in ceremonial and ritual purposes. At this point a large quantity of beef bones, and also fragments of bowls (diameter 25 cm), which were deliberately broken. These fragments and the presence of animals can speak about the sacrifices. In addition, the site found fragments of human skulls (four people): the remains could be brought from nearby tombs.

All on-site excavation found 15 bowls, their total number could reach 200. In the near future, scientists will conduct a chemical analysis of dishes for determining the composition of the products which it holds. Until now was known only to one monument of the early Neolithic, is located close (four kilometers) from Stonehenge, its construction dates back to the year 3650 BC. In Britain there are about 70 such complexes.

Stonehenge — a megalithic construction, which is located in Wiltshire County, 130 kilometers southwest of London. According to estimates of archaeologists, the monument was erected between 5000 and 4000 years ago. Plot functions are not installed, according to one theory, the position of the stones located here corresponds to astronomical phenomena and could be used as an Observatory. It is known that Stonehenge was also used for burials.