In Chad, the femur of the ancient human ancestor was found 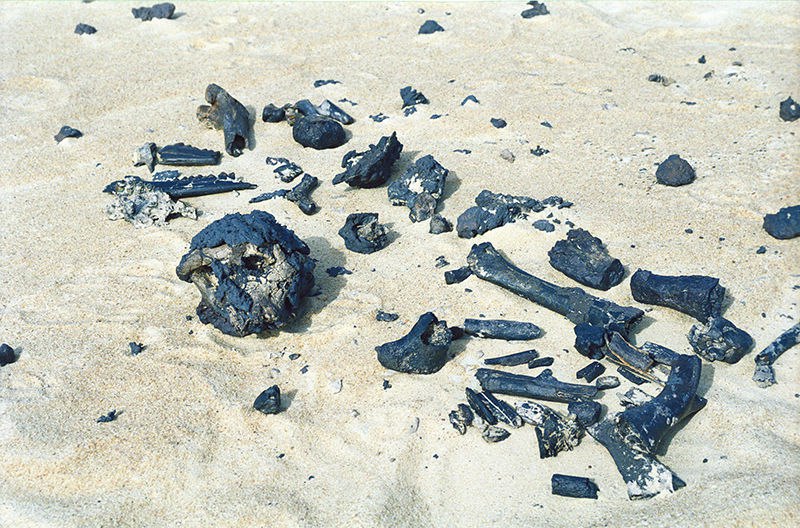 The thighbone, which belonged to the most ancient human ancestor – the sahelanthropus – still exists. Recall that the bones of the famous hominin group of French scientists, led by Michel Brunet (Michel Brunet) from the University of Poitiers (fr. Université de Poitiers) found in the desert in the north of the Republic of Chad on July 19, 2001.

Then it was reported that a skull 7 million years old, several lower jaws and teeth, and “animal remains” were found. Apparently, among these remains, a fragment of the femur was wedged. However, there were vague conversations about him, but in scientific publications the authors remained silent. Only the skull quickly became famous. At the same time he was christened Tumai, which in the local dialect meant “hope of life.”

Now it turns out that soon after the discovery, the femur found there was examined by scientists – Roberto Macchiarelli, an anthropologist from the University of Poitiers, and Aude Berger, director of the Museum of Natural History of Victor Brun in Montauban (Le Musee d’Histoire Naturelle Victor Brun). The fact is that the bones collected by the Brunet team were sent to Poitiers in 2003, where they were stored in a collection of fossil remains. A year later, analyzing the materials of the expedition, Od Bergeur, at that time a post-graduate student of the university, came across a severely damaged and blackened femur. As Brune at this moment again went to Chad, Bergere asked Roberto McCarelli to help with the analysis of the find. The authors of the study recall that at first they joked, as if they found the thigh bone Tumaya, but soon realized that, perhaps, this is not a joke at all.

Then, in 2004, scientists prepared a preliminary report on the study and intended to present it at a meeting of the anthropological society of Paris held in Poitiers, but for some unknown reason their report was rejected by the organizers of the conference. The management of the anthropological society of Paris informed the editors of Nature that, in preparing for the conference, they rejected 6 of the 65 reports submitted, and the decision was made by an “independent and impartial scientific commission”. What did they not like the material of McCarelli and Berger? Scientists hide …

The site Nature says that now the authors have provided their unpublished text to the editorial staff of the magazine, but they do not hurry to publish the material in Nature. It is reported only that the alleged bone of the Sahelanthropus is very different from the hip of another ancient hominin – Orrorin, who lived in Kenya about 6 million years ago. In general, the mystery continues to be pumped.

Femoral Sahelanthropus – this is not a joke! Indeed, the statement of the authors of the finding that Tumai was bastard, has been controversial since the discovery. This conclusion Brunet made on the basis of the location of the large occipital orifice, which is shifted in front of the Sahelanthrope and is in a position intermediate between the variants of the great apes and man. Some scientists were not satisfied with this argumentation, they stated that for bones to be unambiguous, bones of other parts of the skeleton are needed. Especially loudly objected to the authors of another sensational find – the mentioned Orrorin, whose remains, found in 2001, also claimed the title of the most ancient of the upright. That’s where the thigh bone Tumaya, perhaps, would put an end to the dispute!

Brune then managed to defend his point of view. I must say that the Sahelantrop is not the first significant finding of the French anthropologist. In 1996, on the findings in Chad, Michel Brunet’s team described the australopithecus of Bahr el-Gazal. But it was with the opening of Tumia Brunet became famous in France, and especially in Poitiers, where in his honor even called the street.

Why did the femoral of the Sahelanthropus (if it is she) stay out of sight of scientists so long? Maybe it is so fragmented that nobody paid attention to this fragment? Or is its structure too different from what anthropologists expected? So far, Brunet has refrained from any comments, saying that “the study is still ongoing.” We will all have to wait for the publication. True, nothing is reported about the timing of its release, but since such an authoritative magazine as Nature has started talking about the find, I hope that the matter has moved from a dead end. And what if it turns out that the Sahelantrop is not hominin at all? Just an extinct anthropoid monkey, the ancestor of a gorilla, as suggested by another famous anthropologist, Milford Wolpoff? In any case, McCarelli expressed doubts about the status of Tumai, adding that the conclusion should be made only after a more thorough study of all the remains of the Sahelanthropus.

For the time being I have to be satisfied with the memories of a few witnesses. Thus, David Pilbeam of Harvard, co-author of the description of the skull and lower jaw, Tumai, claims to have seen this very femurs glimpse when he visited Poitiers more than 10 years ago, but did not participate in any analysis of the find. “All I remember is that she did not have enough ends, and that she was very black,” says Pilbim.