In China, found traces of dinosaurs 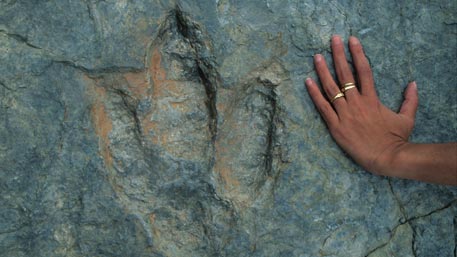 Chinese archaeologists discovered in the southern province of Guizhou more than 200 well-preserved traces of dinosaurs that lived on the planet 170-180 million years ago.

Scientists have established that these rare fossil imprints belong to sauropods – large herbivorous reptiles with a small head and a long neck.

“These tracks are a very special find,” said Professor Xing Lida of the Chinese Geological University (Beijing). “I think they will allow us to create a clearer idea of ​​the migration of these giant creatures at the very beginning of the Jurassic period (201-145 million years ago).”

According to the expert, he went to the place where rarities were found, as soon as information about them was received. Shin Lida carried out a preliminary analysis of the tracks before the professional working group for their study was formed, which he headed. To date, experts have completed the measurement work and have begun to study the accumulated material.

Traces of dinosaurs of the early Jurassic period in China archaeologists have been found several times before, however these were a few and poorly preserved specimens.