In China found traces of the legendary Great flood 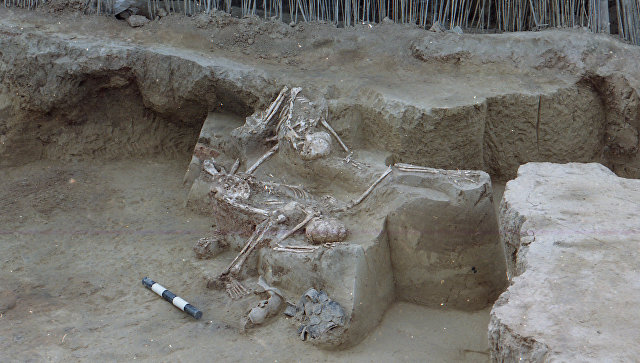 Archaeologists have found traces of that in the days of the Xia dynasty, which according to legend belonged to the founder of China, Emperor Huang di really was a massive flood of the yellow river and the great flood with a height of 38 meters, the defeated Emperor of Uiem in 1920 BC.

The founder of China traditionally is considered to be the legendary yellow Emperor Shi Huang di, who ruled China around the year 2800 BC. One of his descendants, Yu is considered the first real Emperor, the founder of the Xia dynasty, which the legends of Ancient China is credited with magical powers.

In particular, Yu is the main character of the Chinese version of the legend about the Great flood, which swept the Empire during the reign of Yao, one of the descendants of Huang Di. In accordance with the legend, the mind of the future Emperor and his magical abilities have helped him harness the streams of water that threatened to flood the whole of China. Created the channels and the focus that had been required for their preparation is considered to be the cause of one China and the Xia dynasty.

It takes (Qinglong Wu) from the University of Beijing (China) and his colleagues found unexpected evidence that legends really do not lie, and that the flood really was, studying the rock deposits of that time are preserved in the gorge czichi in the West of China, near the Northern boundary of Tibet, through which flows the yellow river.

Studying the floodplain of the yellow river, the researchers found just downstream of the yellow river strange silt, black sand, as they call them, which testified to a powerful stream of water that swept through the gorge, burst river banks and left a large number of pebbles, sand and boulders away from the river.

The reason for this, judging by other unusual marks up the river, was a massive landslide which blocked the course of the yellow river and became a giant natural dam height of 200 meters, outside of which there was a whole reservoir. After a while, 8-9 months, the water reached its peak, the wall gave way, and streams of water rushed down the river.

As a result, its level almost instantly increased by 38 meters, width has increased several times. Every second the yellow was thrown more than 500 thousand cubic meters of water in excess of that, in the words of Darryl Grainger (Darryl Granger), one of the participants of the excavation exceeds the power of all documented floods that occurred in the Amazon, the largest river of the Earth.

Apparently, the flood was so strong and long that it flooded all the settlements of the ancient Chinese, is located on the banks of the yellow river, 25 kilometers from the gorge, and led to major cultural and governmental shifts. Their traces can be seen in that looked like tools and artifacts to 1920 BC, when there was a flood, and after this point – at this time the culture of the stone age are replaced by traditions and know-how of the bronze age.

This date, as they note, is relatively unexpected – legends, and other sources have indicated that the flood happened a little sooner in the 22nd century BC or in the 21st century. Thus, it is possible to say that China has become slightly younger, as the Xia dynasty, if it really was the result of the flood, appeared two centuries later than previously thought.