In China have found an ancient “Altar of the Sky” 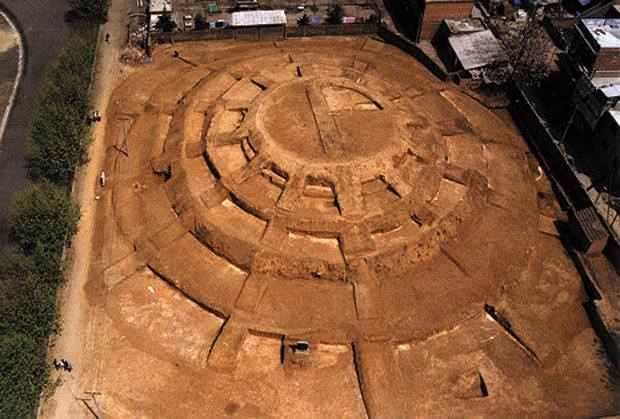 Chinese archeologists discovered in Shaanxi province in Central China Imperial ritual complex, the Altar of heaven. Scientists have dated the construction to the beginning of the Qin dynasty (221-207 years BC), it was used for sacrifices, which were held by the emperors of China.

It is the oldest and largest Altar of the sky found so far. Message about the discovery was published news.youth.cn, briefly about it it is reported in the press release of the Institute of archaeology Chinese Academy of social Sciences.

The ancient Chinese worshiped the Eternal blue sky, the Supreme deity. It was believed that China’s rulers for their virtue has earned “the trust of Heaven” and each of them received from the deity heavenly mandate that allows for control of China (China) on its behalf, and served as proof of the legitimacy of the ruling dynasty. The ruler bore the title “Son of heaven”, and to maintain ties with his “father”, he had to hold an annual ceremony specifically for this complex, the Altar of Heaven.

Accompanied by a band playing religious hymns, the ruler of barefoot climbing the stairs of the Altar, stretched prostrate before the deity and prayed to the Sky. Apparently, in ancient times during the ceremony as a sacrifice to the Sky still sacrificed animals. The efficiency of the “Son of Heaven”, as a ruler depended on the proper performance of the ritual. If next year the country has seen a crop failure or natural disasters, their culprit was considered the ruler who failed to “appease” God.

Archaeologists have discovered a ritual complex during the excavations conducted from April to November this year. The building is located on a hill 15 kilometres from the ruins of the ancient capital of the state of Qin Junchen (Yongcheng). Today, scientists have more than 2000 objects, particularly bones of horses, cattle and sheep, which, apparently, sacrificed, and artifacts: jade plate, bronze spearheads, wooden wagon. In addition, it was discovered the pit where they kept the cattle, the place of sacrifice, the residence of the Manager of the complex.

One of the most important findings were concentric circles of pressed earth, one above the other, the diameter of the bottom made up of 31 meters. According to archaeologists, the description in ancient literature and the location of the ruins similar to the Altar of Heaven where the emperors of the Qin (221-207 years BC) and Han (206 BC-220 ad) were religious ceremonies.

According to the head of the excavation, Si Tien (Tian Yaqi) the total area is about five million square meters. Until now, scientists have unearthed only a small part of an area of 2000 square meters. The researchers also confirmed the presence of more than 3,200 related to complex objects, including buildings, roads and pits for sacrifices.

Until now the oldest altar of Heaven was believed built in the late VI – early VII century in XI’an (now Shaanxi province) structure consisting of several concentric platforms with a height of about eight meters. The most famous and well-preserved Altar of the Sky remains a ritual complex in Beijing, constructed in XV century.

In 221 BC the ruler of Qin conquered the six neighbouring States and established the first unified Empire. He took the name Qi Shi Huang (“First Emperor of Qin”) and founded the Qin dynasty, which fell apart a few years after his death. Replaced the Qin dynasty came the Han emperors which, thanks to the wise domestic policy, was able to stay in power for more than 400 years.