In Copenhagen found the burials of ancient people 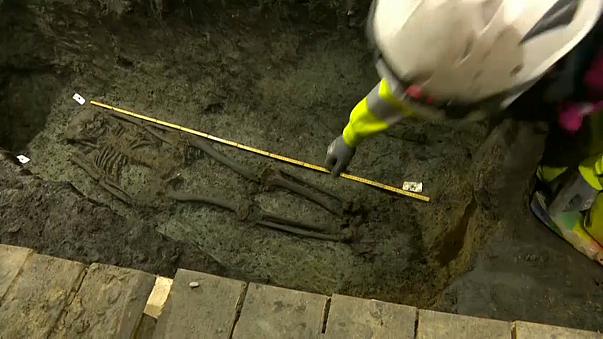 A group of archaeologists from Denmark discovered traces of the first inhabitants of Copenhagen. According to scientists, in the center of the Danish capital, under the square near the town hall, they found the burials of ancient people who lived about 1 thousand years ago.

“It’s just incredible,” the archaeologist and curator of the Copenhagen Museum Jan Jensen told the agency. “In the busiest place in Copenhagen, at a depth of only one meter, we found two large graves, supposedly made a thousand years ago.”

According to scientists, they managed to find the remains of 20 ancient people, both adults and children. Now the findings will be sent to the Museum of Natural History of Denmark for research.

Archaeological excavations were conducted in Copenhagen from December last year, but information about this was not widely publicized. It is noted that scientists did not want to attract the attention of onlookers who might interfere with the work.

Discovered burials archaeologists refer to the times when the place of the Danish capital did not exist city. Until the 12th century, there was the coastal village of Havn, which turned into a city in 1167 after the construction of the castle and defensive fortifications. The modern name of Copenhagen, which from Old Danish is translated as “harbor of merchants”, appeared in 1254. The city acquired its capital functions only at the beginning of the 15th century, when King Eric Pomeransky, who united Denmark, Sweden and Norway into an alliance known as the Kalmar Union, made Copenhagen his residence.

As Jensen noted, “the ancient finds in Copenhagen will give scientists a completely new level of knowledge” about the origins of the ancient Vikings who inhabited these places in the distant past.