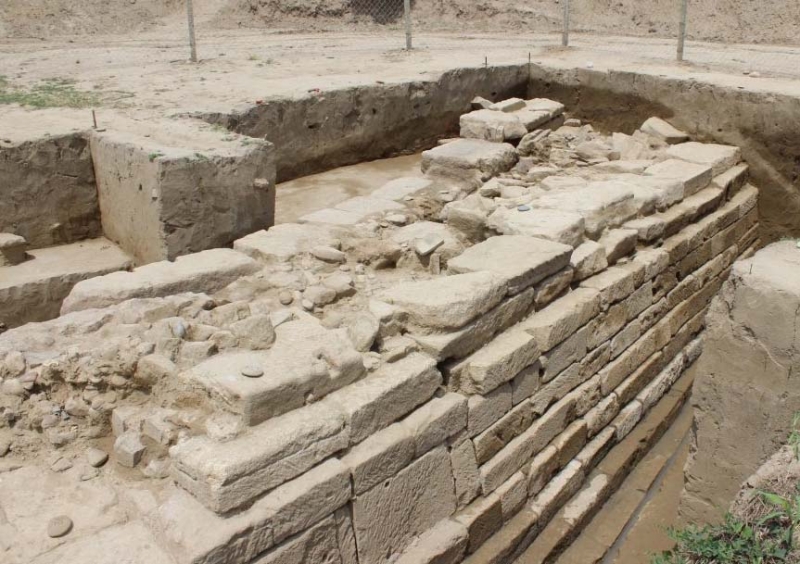 The Rabaska fragments of ancient walls, which were described by travellers in the XVII-XVIII centuries, unearthed archaeologists near the Dagestani city of Derbent.

In February 2014, in the valley of the river Rubas, in place of its exit on the coastal plain (rural Municipality of Derbent region) was opened the remains of old buildings, covered with mud deposits of the river. Until 90-ies of XX century terrace above the left Bank of the river low, where the culture was occupied by areas of relict forest.

Speaking about the discovery, leading researcher of Institute of history, archeology and Ethnography Dagestan scientific center of RAS Ludmila Gmyrya noted that these unique stones open a new page in the history of Dagestan, the wall more than 1,5 thousand years.

“The pit dug to a depth of three meters, filled with different sized stones, earth and white lime mortar. The wall itself has a length of 20 meters. During the examination of the monument became known that this fortification, built to protect from enemy attacks,” she said.

There is speculation that this building can be dated earlier than the building of the Derbent wall, as discovered 3 plates with a size of 2.6 meters, which was not even used in the construction of the Derbent walls. And the technology of masonry and the dimensions of the plates of the two walls is different. However, there is speculation that this structure also built by the Iranians, but only in an earlier time, when the technology of construction has not yet been determined.

The wall was built of smoothly hewn well of large stone slabs laid in horizontal rows on a clay solution. Preserved 9 rows total height is 2.2 meters, the bottom four rows had a stepped design. One plate is of rectangular shape were put in the masonry to the edge facing. The cavity of the tower was filled with small gravel and rubble stone, covered with white lime mortar. The pit is enclosed by a fence. This was done by the locals for security reasons, so they wanted to keep small children and animals from falling into excavation.

The collapse of the castle tower Rabaska structure was discovered large pieces of burnt bricks used in the buildings, small amount of fragments of ceramic vessels, among them the part of white clay water jug decorated with a print of Arabic inscriptions. Specialists of the Department of Oriental studies, Institute of history, archeology and Ethnography Dagestan scientific center of RAS reconstructed the full text of the inscription, part of which have not survived. The vessel was caused to the text of the verse of Surah of the Qur’an: “It is the grace of my Lord to test me whether I am grateful or not] true.” This vessel with the impression of the Arabic inscriptions, characterized by labor-intensive technology, discovered on the territory of Dagestan for the first time. As it turned out this pitcher on the collapse of fortress construction of the VI century, will be explored in the further study of the Rabaska wall. 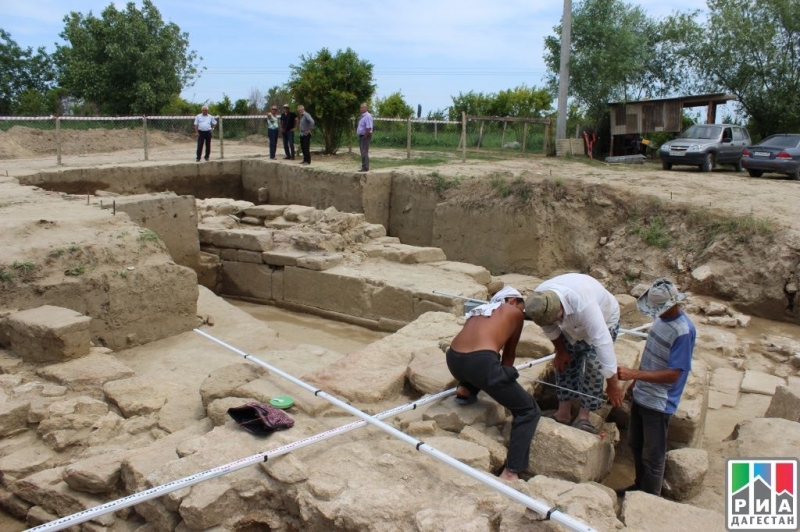 “It’s so exciting to open up one stone after another. We thought now would be a twist, and we’ll find it, then it will be the second turn, as it is a square tower, and at least something will understand. But it turned out differently, and this wall is supposedly up to the sea. This is a new Grand object, which has a lot of mysteries. We must unravel the plans of the builders, why they built a wall so and not otherwise. We thought that there is a tower, it was a wall. We thought that buildings connected to each other, but it was not so. We’re going to dig more in depth of three meters, as well as in the sea. A lot of work, there are lots of plans n we are glad that something new in Dagestan opened. In the world have already discovered everything. And suddenly this huge building – it is a great luck,” – says Ludmila Gmyrya impressions.

Two months lasted the expedition. A group of researchers, which included several local residents, working with blades, brushes, brooms, shovels, hoes young. This is manual work during which it managed to clear up part of the Eastern and Western walls tower over 2.3 metres, and two building projects, the purpose of which is not clear. On the undisturbed area adjacent to the excavation from the West, found the fragments of one building block monumental structures, including a massive stone slab with a length of 2.4-2.6 meters with a width of 0,6-0,7 m. The other object is located from the Eastern edge of the wall, destroyed a resourceful local resident.

In 2006 archaeologist spent on this earth excavations of the Palace-Syrtsova of the burial mound. All help the researcher provided the Director Rabaska bbPress, which solved the economic and organizational problems of the members of the expedition, but until 2014 there was no fact of the location at depth of large area plates. This agricultural land for a vegetable garden for several decades used a local resident Hajibala of Gulmahmadov. Two years ago, trying to dig up the earth with a plow, he found that at a depth of 10-15 cm his weapon starts to break down. Assuming that it is the rock that the villagers used Japanese escalator. Going deeper into the ground, it became clear that a lot of stones. Then he loaded on KAMAZ 30 huge plates to be used to build a second home on the site. The eldest son Gulmamedova, realizing that this is not a simple plate, said about the discovery of the father Director Rabaska SOSH Hajikurbanov Meirambekov. Already place Meirambekov suspended the action of enterprising men and reported the discovery in Dagestan scientific center RAS.

The next day after a call from the Director of the school leading researcher of Institute of history, archeology and Ethnography Dagestan scientific center of RAS Ludmila Gmyrya, together with representatives of the Ministry of culture visited Derbent district. At the first examination of the plates, which were the gates of the house of a local resident on the road, it became clear that they are similar to the plates of the Derbent walls. Later, however, Ludmila Gmyrya with his team found evidence that can dispute this fact. On arrival directly at the object, the researchers appeared a large pit with a depth of 3 meters, filled with different sized stones, earth and white lime mortar. No buildings with regular masonry could not be seen. It became clear that the remains of the building were destroyed thoroughly and part of his design was lost forever. 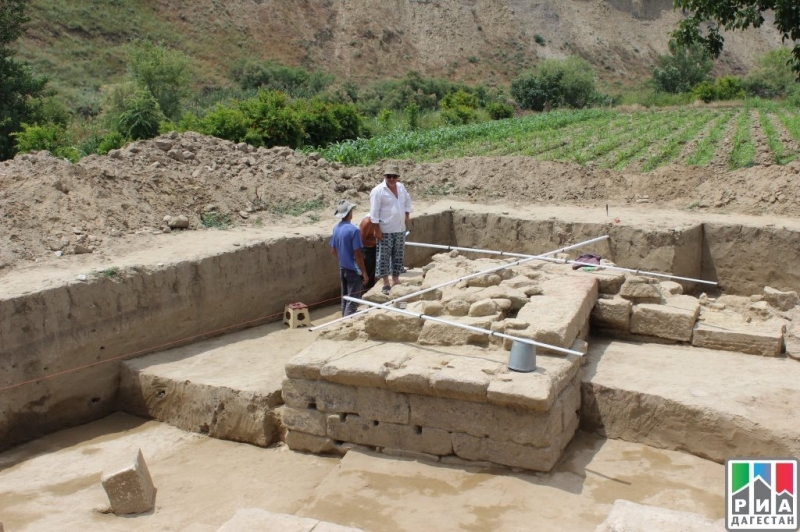 “This building was accidentally discovered by local residents. Instead consult with experts, what are these stones, they began to get it and cut it. Local residents have noticed that these stones are special and similar to the stones of which was built the ancient buildings,” – says the archaeologist.

Having a small amount of money from the Russian Foundation for basic research, the researchers put them in a two-week investigation with the purpose to understand what this structure. So, in 2014 was carried out preliminary excavations found the walls of three stones and small areas.

“In 2015, we are unable to continue the excavations, as there was no funding. We applied for a grant to the Rabaska excavation wall to the Foundation for Humanities research, however, has not received funding since the last time we received money for the excavation of the Kurgan burial ground. At the moment the excavations are funded by a grant from the Russian Foundation for basic research. The theme of our research is an international system of strategic defense in the Eastern Caucasus in the fifth century,” – emphasizes Piotr.

In the XVII-XVIII centuries travelers in his memoirs, noted what they had seen on the Dagestani coast of the Caspian sea not only well-preserved of the Derbent fortifications, but also the collapse of three long walls, similar to Derbent, known from the literature as Tarki bell, Severodonetska and Rabaska. Of particular interest among the scientists called Rabaska defensive wall, the location of which in details described by the German doctor Johann Lerche, member of the Russian embassies traveling to Persia in 1747. According to him, the ruins of this wall in the form of a shaft has been viewed 18 km to the South from Derbent, starting at the fortress the Thorpe-Kala (modern Stantsiya Belidzhi) near the coast and then walking along the river Rubas to nearby mountain ranges. Of course, scientists tried to find Rabaska wall, but the attempts were not successful as the structure was covered with earth. According to the preliminary findings, discovered on the river Rubas new object may be part of the wall, Lerche recorded in 1747.

Due to the fact that the period of research had expired, archaeologists will provide progress reports and develop a plan of action. It is assumed that excavation will last for two months in 2017 and 2018 that will determine the purpose of the monument and its design features.