In Denmark, found the ancient fortress of the Vikings 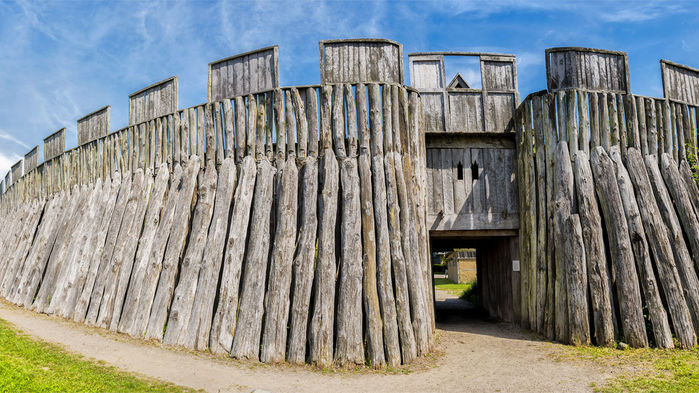 Danish archaeologists have discovered a previously unknown Viking fortress, built in the late 10th century, whose unusually advanced architecture suggests that the Normans were not primitive robbers and pirates.

“The discovery of this fortress was a real detective for us, I have been studying these circular castles for a long time, and I came to the conclusion that the fortresses known to us are very illogical, between them there are large” holes “where, in theory, “, Says Soren Sindbaek, an archaeologist from the University of Aarhus (Denmark).

The first fortresses of this type, which archaeologists now call “Danish circular locks,” were discovered in Denmark in the 30s of the last century. They are military forts with a diameter of approximately 130-200 meters, surrounded by a moat and fenced off from the outside world by an earthen rampart and a wooden palisade. 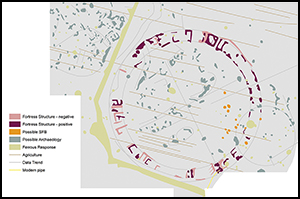 Each such fortress was built according to a kind of “standard plan” – they had four entrances perpendicular to each other, two streets intersecting exactly in the middle of the fort, and several “long houses”, collective Viking hostels, and other buildings. Similar fortifications were built in the strategic areas of Scandinavia, near the shore of the sea, and they could serve as a gathering place for the Viking troops for major campaigns.

In total, as Sindbek notes, archaeologists have discovered five such fortifications in different regions of Denmark and southern Sweden, the study of which showed that the Vikings were able not only to fight, but also to build. Why they built these forts remains a subject of debate among scientists, since the exact date of their construction is not yet known.

Sindbek and his colleagues discovered traces of the existence of another similar fortress on the island of Zealand, whose tracks, according to the archaeologist, were almost completely destroyed over the last thousand years by plows and other agricultural implements of the peaceful heirs of Scandinavian menacing thieves.

According to Sindbek, the “strategic” location of the fortresses supposedly built by King Harald Sinezuby, the first Christian ruler of Denmark, has long worried him – some of the fortifications were simply missing in those “obvious” places where such circular castles were supposed to be.