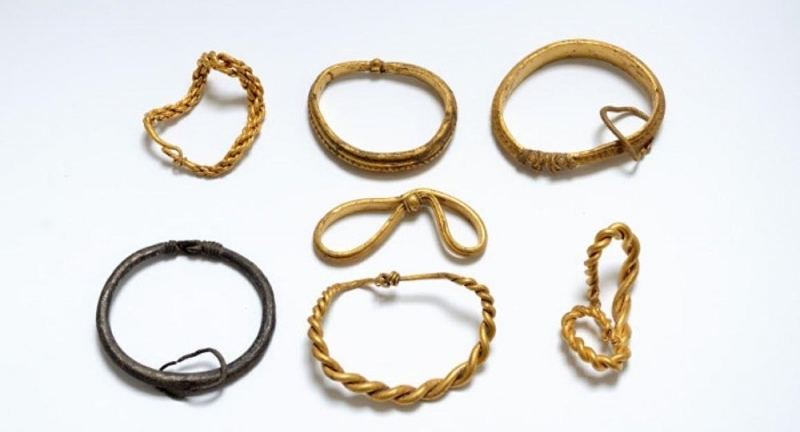 Seven bracelets — one silver and six of gold the Viking time discovered three Amateur archaeologists in Denmark in one of the southern districts of Jutland, according to the national heritage Museum in Copenhagen.

Articles date back to 900 years ago (X century), weigh a total of 900 grams and is already recognized as the largest and unique in the history of Denmark find.

“Treasure ranked first in the list of the largest gold finds in Denmark of the period of the Vikings and weighs 900 grams. Together with a silver bracelet treasures weigh almost one kilogram,” — said in a press release.

Before the largest for Denmark was considered the discovery, made in South-West Jutland and a weight of 750 grams of gold.

“Find only one of these rings means a lot, so very special — to find seven,” — says an expert on the Viking period National Museum in Copenhagen, Peter Penz, whose words are in the message of the Museum.

According to him, the period of Vikings, really is the silver age, if we talk about the treasure. That is, “the vast majority of findings in sterling silver. And if you have the gold, it is always a small part, not like here”, — said the expert.

His colleague Lars Grandad noticed that in the very place where they were found, in 1911, found a gold chain in 97 grams and this gives reason to believe that the chain and bracelets are connected with each other.

“One of the gold bracelets made in the style known as Jelling (the name of the town of Jelling in Denmark –approx.red and gold chain in 1911,” explained Danish archaeologist.

Archaeologists-Amateurs, commenting on his unique find, admitted that he did not believe in the reality of the situation.

“We really felt that he had found gold when he found the first bracelet, but when they began to appear, all seemed something unreal” — are words in the message Agard Marie Larsson who found the treasure along with her husband and family friend.