In Egypt, found a statue of the Roman Emperor Marcus Aurelius 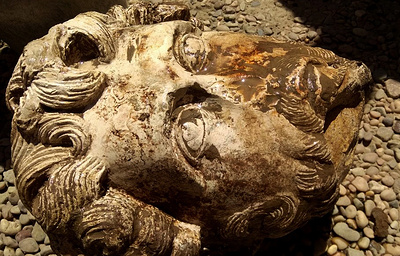 Bust of the Roman Emperor Marcus Aurelius was discovered by archaeologists during the repair work in the ancient Egyptian temple of Kom-Ombo in the south of the country. This was reported by the Ministry of Antiquities. The uniqueness of the find, it is noted in the communiqué circulated by the department, is that the sculptural images of this ruler (161-180 years) practically did not occur on the territory of Egypt.

According to the head of the Department of Ancient Egypt Ayman Ashmaui, find a picture of the Emperor curly head with a beard has dimensions of 40 cm by 33 cm by 34 cm. In addition, he added, is found near the headless statue of a fragment of sandstone. Now scientists hope to compare these artifacts.

The work carried out since September 2017 to clean the temple of groundwater is not the first time leading to archaeological discoveries. So, in February the ministry announced the discovery of fragments of a huge statue of Pharaoh Ramses II, one of the most famous and famous czars of Ancient Egypt. A month before, several ancient statues had been found there.
In ancient Egypt, Kom Ombo was the capital of the fifth noma (province) of the country. The first mention of it refers to the First Transition Period (XX century BC). In those days, there were erected religious buildings, but little has been preserved from them.

Already in the era of the Ptolemies (from the 4th century BC), two temples of stone were erected in Kom Ombo. One wing of the sanctuary was dedicated to the crocodile god Sebeku, the other to the god Gora, who was portrayed as a falcon. The decoration of the temple was completed only in II-III centuries AD.

Egypt was under the rule of the Roman Empire from 30 BC. until the year 395 AD. This is reported by Rambler.