In Egypt, found the ritual boat of the god Osiris 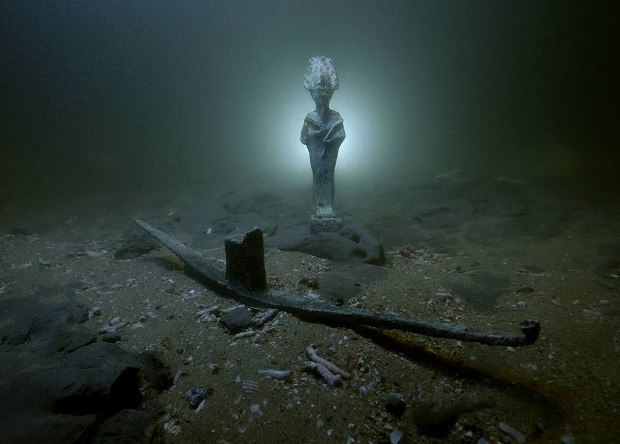 The Secretary-General of the Supreme Council of Antiquities of Egypt, Dr. Mustafa Vaziri, spoke about the discovery of four sunken ships.

Three of them, dating from the Roman period, were found in the harbor of Alexandria, the fourth – in the Gulf of Abu Kir, where previously the sunken cities of Herakleion and Canopus were found. Also, the researchers discovered artifacts associated with the Roman rulers Mark Antony and Octavian Augustus.

The cities of Canopus and Heraklion were founded in the Nile Delta around the 8th century BC. These port cities were the largest centers of Egyptian trade with the Greeks. However, after the founding of Alexandria in 332 BC, both cities lost their positions. Both Canopus and Heracleon roughly existed until the second half of the 8th century AD, until, for some unknown reason, they sank under the water.

After the founding of Alexandria, it becomes the main commercial and cultural center of Egypt. The kings of the Ptolemaic dynasty, who ruled in 323-30 BC, made it the capital of the country. During the reign of the last of them, Cleopatra VII, between Mark Antony, the ruler of the eastern provinces of the Roman Republic and the lover of the Egyptian queen, and Guy Octavius, the ruler of the western part of the country and the future emperor Octavian Augustus, begins a struggle for power. Cleopatra supplied the troops of Mark Antony with food, in addition, the Egyptian money was built part of the Roman fleet. After a series of skirmishes and subsequent reconciliation, in 31 BC a decisive naval battle took place in Greece. Mark Antony and Cleopatra were defeated and fled to Alexandria. The following year, Octavian attacked Egypt. After the defeat of his troops, Mark Antony, and later Cleopatra, committed suicide. Egypt was annexed and became a Roman province.

Employees of the European Institute of Underwater Archeology are conducting underwater work off the coast of Egypt for more than 20 years. During these years, researchers discovered near the shores of Alexandria the sunken cities of Canopus and Herakleion. During the field season of 2017, they found in Herakleion the ritual rook of the Egyptian god Osiris, who apparently served to transport the statue of God during solemn processions. Also, during excavations in the Eastern harbor of Alexandria, archaeologists found three sunken ships of the Roman period, a sculptural head, possibly belonging to Mark Antony and three gold coins (aureas), which were minted in the reign of Octavian Augustus.

Next year, researchers plan to continue work in the bay of Abu Kir. According to the head of the Central Department of Underwater Antiquities, Dr. Osama Alnahas (Osama Alnahas), during the preliminary excavations, scientists discovered wooden ship cladding and ceramic shards. Therefore they expect to find another wreck.
In 2015, the Egyptian authorities approved the reconstruction project for the ancient Alexandria lighthouse. It will be built on the island of Pharos in the Bay of Alexandria, where the historic lighthouse was located.