In Egyptian Luxor discovered a new statue of the Sphinx 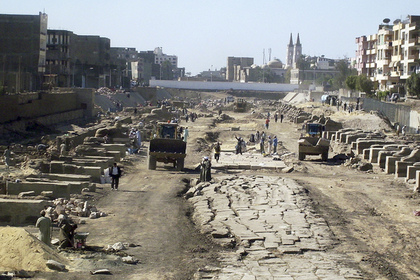 The artifact was discovered by workers during the construction of a new road in the Alley of Sphinxes between the Karnak and Luxor temples. The statue found is not similar to the other sphinxes with sheep heads, but resembles the “classic” Sphinx in Giza – a lion with a human head.

The monument still remains in the ground. According to Aziz, the statue can not be extracted, because it can collapse from a sharp change in the environment.
In 2014 in Luxor was discovered the tomb of the brewer, whose age is more than 3200 years. As archaeologists have found out, the T-shaped tomb belongs to Khonso Im-Cheb, who made drinks for rituals dedicated to the goddess Mut. On the walls of the burial there were found beautifully preserved to this day drawings depicting scenes from the life of the brewer: from everyday to ritual