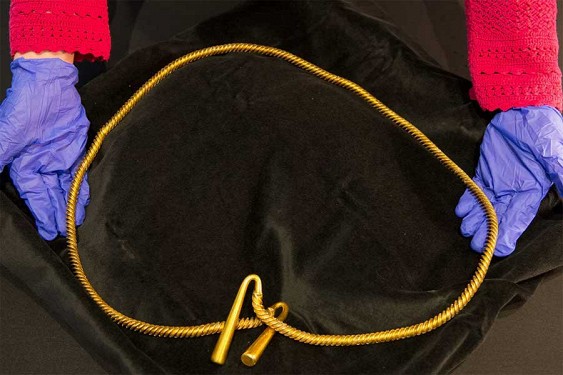 A treasure hunter armed with a metal detector, found in a field in Cambridgeshire, a giant necklace (torc) of gold, weighing about 730 grams and age of more than three thousand years.

Torquay is usually considered to be cervical necklaces, but the longer the artifacts were worn as belts. However, Neil Wilkin, curator of European bronze age at the British Museum (which has been a godsend), reports that the circumference of this “torque” more than the waist of even the most full of men.

Because Torquay is never placed in graves, they are, according to Wilkin, was associated with life and fertility. He suggested that the artifact could be worn by a woman in late term pregnancy to protect the fetus from the evil eye. Or maybe the torque put on the sacrificial animals — sheep or goats.

The exact location of the find remains unknown. TORK came to the Museum thanks to local employee Portable Antiquities Scheme is a special government program to alert about the findings of Amateur archaeologists.