In England there was a very rare gold coin 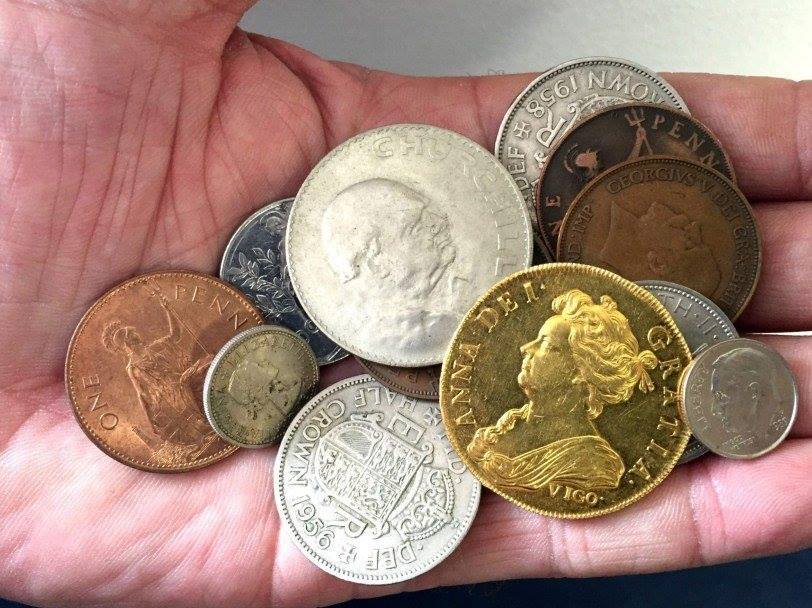 Extremely rare British coin beginning of the eighteenth century has long been used for children in the same family from the town of Bishop’s Stortford in Herfordshire.

It tells the coin owner, who wished to remain anonymous, his grandfather traveled a lot and gave my grandson the coins of different countries. Boy playing pirates loved to hide them in a little box as a “pirate treasure”. Recently, a grown-up boy remembered his childhood treasures and decided to give them their little son, but first took a few items of interest coins to assess the Boningtons auction house specialists. He said that one of the coins represents nothing but the “coin Vigo” – a rare English coin of the epoch of Queen Anne, made of gold, which was captured from Spanish Galleons during the battle in Bay of Vigo in October 1702.

During the war of the Spanish succession, the United fleet of England and the Netherlands tried to capture the important Spanish port of Cadiz, but failed. Retreating, who led the fleet of Admiral George Owner learned that the Bay of Vigo in Northwest Spain are about 30 ships carrying gold and silver from the American colonies. According to current estimates, their cargo amounted to more than 3,400 tons of silver and 200 tons of gold. Galleons guarded by a squadron of French warships. In the Vigo Bay, the ship was because of the fighting that took place around the Kadis – the usual port of their destination.

George Hands blocked the exit from the Bay, 12 October 1702 attacked French and Spanish ships. After the defeat of the French, the Spanish Admiral Manuel Velasco gave the order to sink the Galleons. But the British still managed to capture a few ships.
At the time of the battle of the gold and silver had already been unloaded ashore and sent to Madrid, some precious cargo was at the bottom along with submerged ships. But the British managed to capture a few dozen tons of silver much less gold. Also in their hands was a large consignment of tobacco, which was sold in London and gave rise to fashion in chewing tobacco among the English. Overall, the battle in Vigo Bay, not so much enriched England, how much is hitting the pockets of Spain.

Later the treasure lying at the bottom of Vigo Bay, have become legendary. They served as a source of financing for the captain Nemo in the novel “Twenty thousand leagues under the sea”. Although production of the British was not as great, they skillfully used her for propaganda purposes.

The Keeper of the mint sir Isaac Newton got 4504 lb 2 oz of silver (about 2043 kg) and 7 lbs 8 oz (about 3.4 kg) of gold to make from them coins which would commemorate the victory of the English fleet. All coins were minted in the amount of 14000 pounds. Silver made coins in sixpence, shilling, half crown and crown. The gold went to coins valued at half a Guinea, a Guinea and five guineas. All coins have sported a portrait of Queen Anne and the inscription VIGO. As mentioned in a special Royal decree, the name of the Bay was placed on coins, “under our image as a mark of distinction from the rest of our gold and silver coins to the offspring continued to remember this glorious act”.

Five guineas in England the early eighteenth century was a very large sum. The average earnings of the working of the manufactory at the time amounted to no more than five pounds, which is slightly less than five guineas. Therefore, coins are in denominations of five guineas were minted a total of 20 pieces. Until now it was knew the location of fifteen of them. All of them are in private collections. Coin, inherited from his grandfather, was the sixteenth.

Over the past half century, only six known cases of a public sale of such coins. The last time this happened in 2012, and the auction price has reached 296 160 pounds (360 $ 200). According to experts, the current owner can sell their coin at least 200 – 250 thousand pounds sterling, and it is likely that for a large sum.

When the coin owner learned the true value of his toys, he left the building the auction house, got in his car and was happy there so vigorously that the servants had seen in the window as the car Bouncing in the Parking lot. The next day the owner of the coins came to make sure that it is not played.