In India, found traces of a dinosaur that lived 150 million years ago 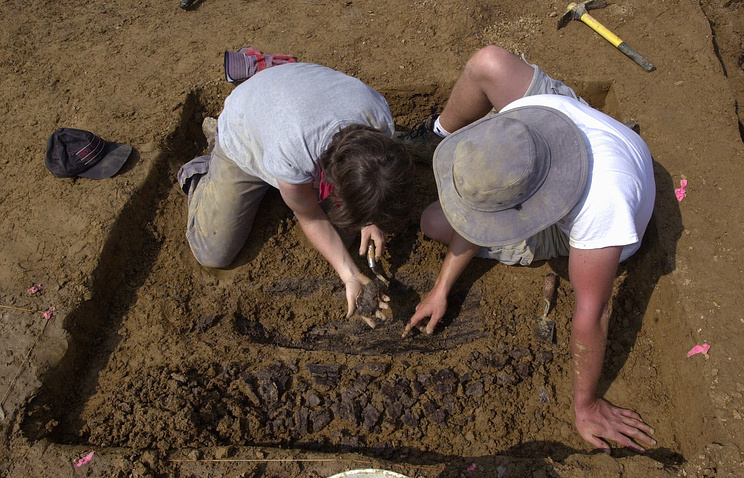 Footprints of the carnivorous dinosaur Eubrontes Gleneronsensis from the suborder theropoda left 150 million years ago, discovered by scientists in the North-West of India in Rajasthan. Chain fossilized three-toed prints were found in the middle of Thar desert near Jaisalmer a group of scientists of the division of Geology and Zoology at the local University Jai Narain Vias.

“We have found three-toed footprints of a dinosaur with powerful claws and large pillows, with fingers larger than 30 cm, said Dr. Virendra Singh Parihar. – According to preliminary estimates, they left the lizard to 3 m high and 5-7 meters in length, lived on the coast.

One of the main tasks of the expedition was the discovery in India of fossils of flying and marine reptiles, not previously encountered here and the pool Katch, and also geological formation Baisakhi in the district of Jaisalmer is considered an extremely appropriate places. Tar or it is also called Great Indian desert, is particularly interesting geological and historical sense, to study fossils, as in this area the sea was at least four times over the last 280 million years of the Triassic, Cretaceous, and Cenozoic periods. It is left in the deposits of the numerous fossilized fragments of plants and animals.

As noted by Professor Suresh Chandra Mathur, the first results are already encouraging, because the Gleneronsensis Eubrontes tracks were discovered in India for the first time, although they had previously met around the world – in France, Poland, Slovakia, Italy, Spain, Sweden, Australia and the USA. “This opens up new horizons in the search for extinct dinosaurs in this region,” he said.

Another sensation was the opening of the paleontological stratum with traces of mass death of animals in the area of formation Fategarh. The so-called bony a vast array of dinosaur fossils, crocodyloidea, gastropods and fish meet the mysterious magnetic balls that are periodically found in ancient geological strata. According to Professor Mathur, this discovery will help to shed light on the mysterious disappearance of the dinosaurs.

The theropod is one of the suborders of saurischian dinosaurs, mainly raptors, which moved on two legs. They accounted for about 37% of all genera of dinosaurs, the most famous of them thanks to the global cinema and film “Jurassic Park” (Jurassic Park, 1993) was the Tyrannosaurus. It is noteworthy that the majority of scientists have been attributed to theropods and modern birds, so the birds descendants of the dinosaurs began to treat one of their suborders, available these days.