In Ireland discovered a huge Celtic cross made of trees 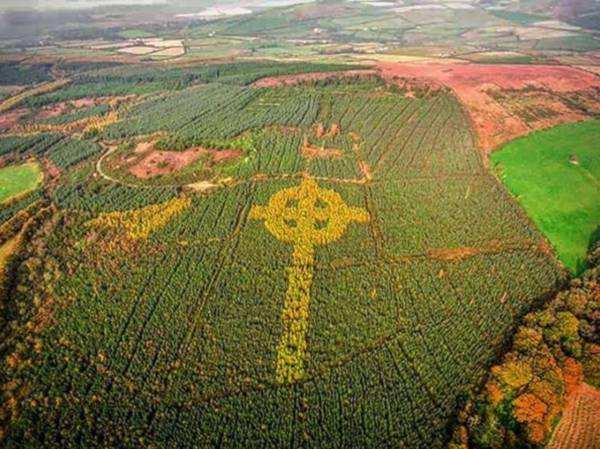 In County Donegal in the North of Ireland discovered the forest in the center of which grow more bright, the trees forming a Celtic cross. Planting, reaching a length of about 100 meters, only noticeable from the air.

Originally a giant symbol has caused confusion and gave rise to various conjectures about the reasons for his appearance. Among them was a message of ancestors, a quirk of nature or a sign from the aliens. But later it turned out that the cross is the handiwork of local resident Liam Emmeri (Liam Emmery). Man created it, using the trees of two types.

Emmeri he died six years ago after an accident. His wife Norma confessed that he forgot about the “forest project”. However, according to the woman, her husband would be happy to know that his idea was a success.

Experts in the field of landscape design appreciated the work done by Emmeri as “a feat of horticultural engineering.”

Celtic cross — symbol of Celtic Christianity. According to legend, he appeared thanks to Saint Patrick who converted the Irish people to Christianity. The circle in the sign signified the sun and help convert the Gentiles to realize the importance of the cross. Usually, it is decorated with traditional patterns.