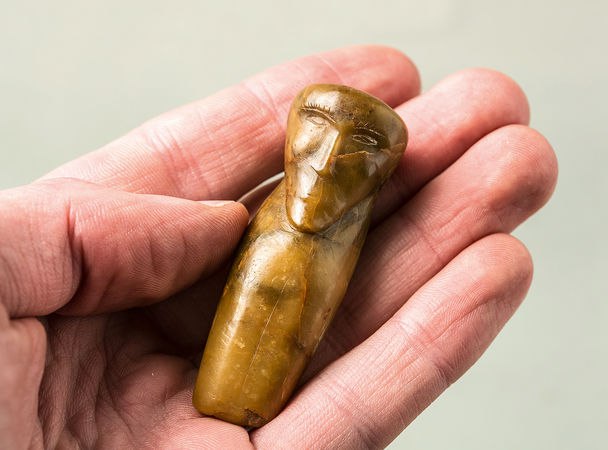 Figurines of more than 4,5 thousand years old were discovered by archaeologists, investigating the Itkol II burial ground in Khakassia (Russia). A second expedition of the Institute for the History of Material Culture of the Russian Academy of Sciences (IHMC RAS) and the Russian Geographical Society worked as a second season in the framework of the project “The Secret of the Ancient Artists of Siberia”.

“In the field season of 2017, we found rare artifacts in one of the burials: the head of a woman from a mineral of steatite (known as a” soapstone “) with carefully worked features and the head of a horse or a dog made of a horn,” says the head of the Sayan expedition IHMC RAS ​​Andrey The Poles. – Probably, these are children’s toys that were made of soft materials – fabrics, leather, and the heads made of stone or horn. Who was their master, it is difficult to say, but there are no details that would indicate the elite nature of the burial, so we can assume that it was an ordinary child. ”

Finds from Itkol II belong to the Okunev culture. This archaeological culture of people of a mixed Europoid-Mongoloid type, who lived in the Early Bronze Age in the Minusinsk steppes in the Middle Yenisei (XXV-XVIII century BC), has no analogues in Northern Eurasia for the richness and diversity of the artistic heritage. It received its name from the Okunev ulus tract in the south of Khakassia, where in 1928 a cemetery with artifacts of this culture was discovered. The art of Okunev culture is represented by rock paintings, numerous objects of small artistic plastic art and “Okunev Stellas” – anthropomorphic stone statues, sometimes reaching a height of several meters. Anthropologists do not exclude that representatives of this culture have the closest relationship with the American Indians to Siberia.